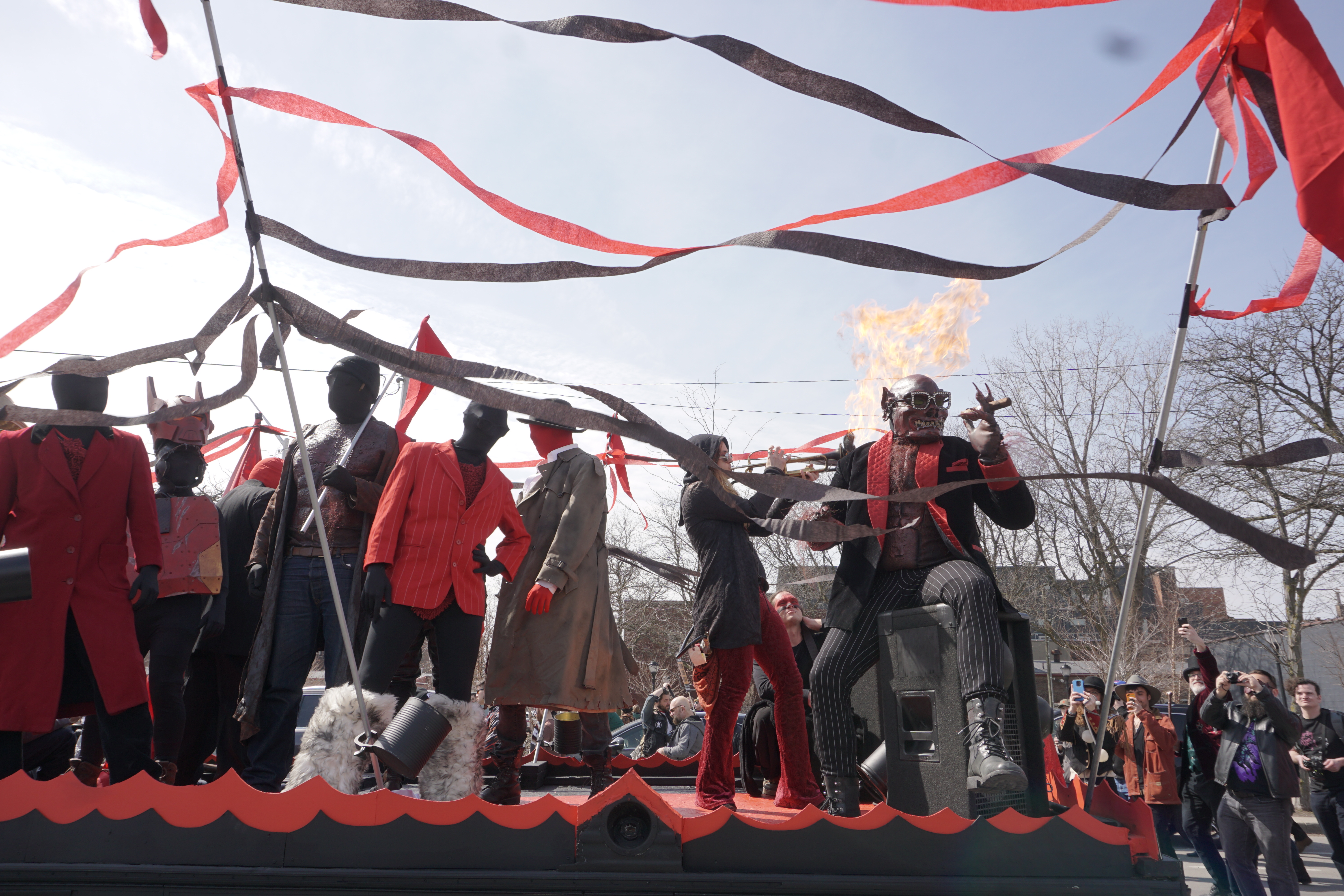 The Nain Rouge (right) during the Marche with a flaming trumpet behind him, on the float carrying the past Nains as well as the Lt. Gov. Garlin Gilchrist. 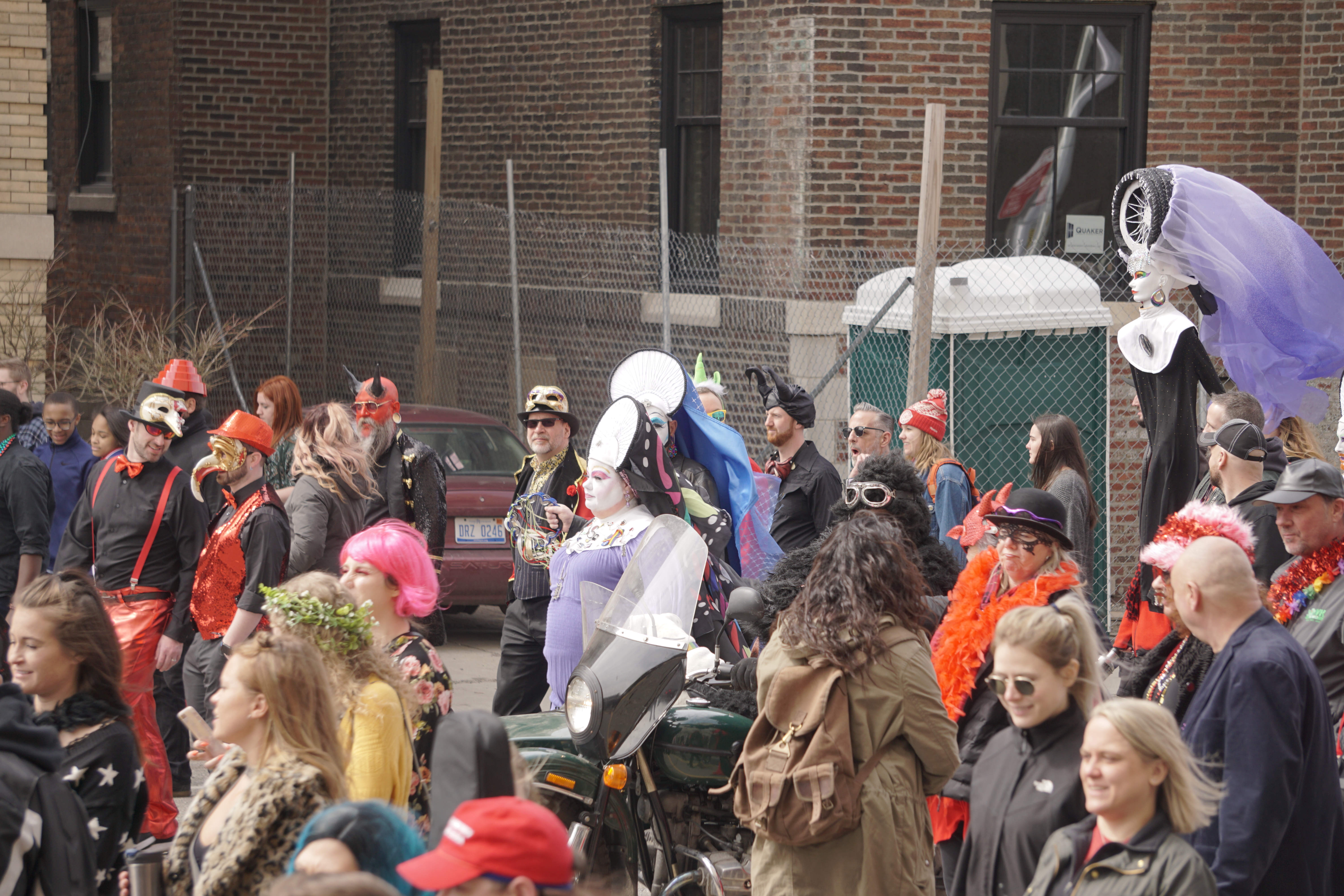 A swarm of parade participants work their way towards the Masonic Temple for the 10th Annual Marche Du Nain Rouge in Detroit. 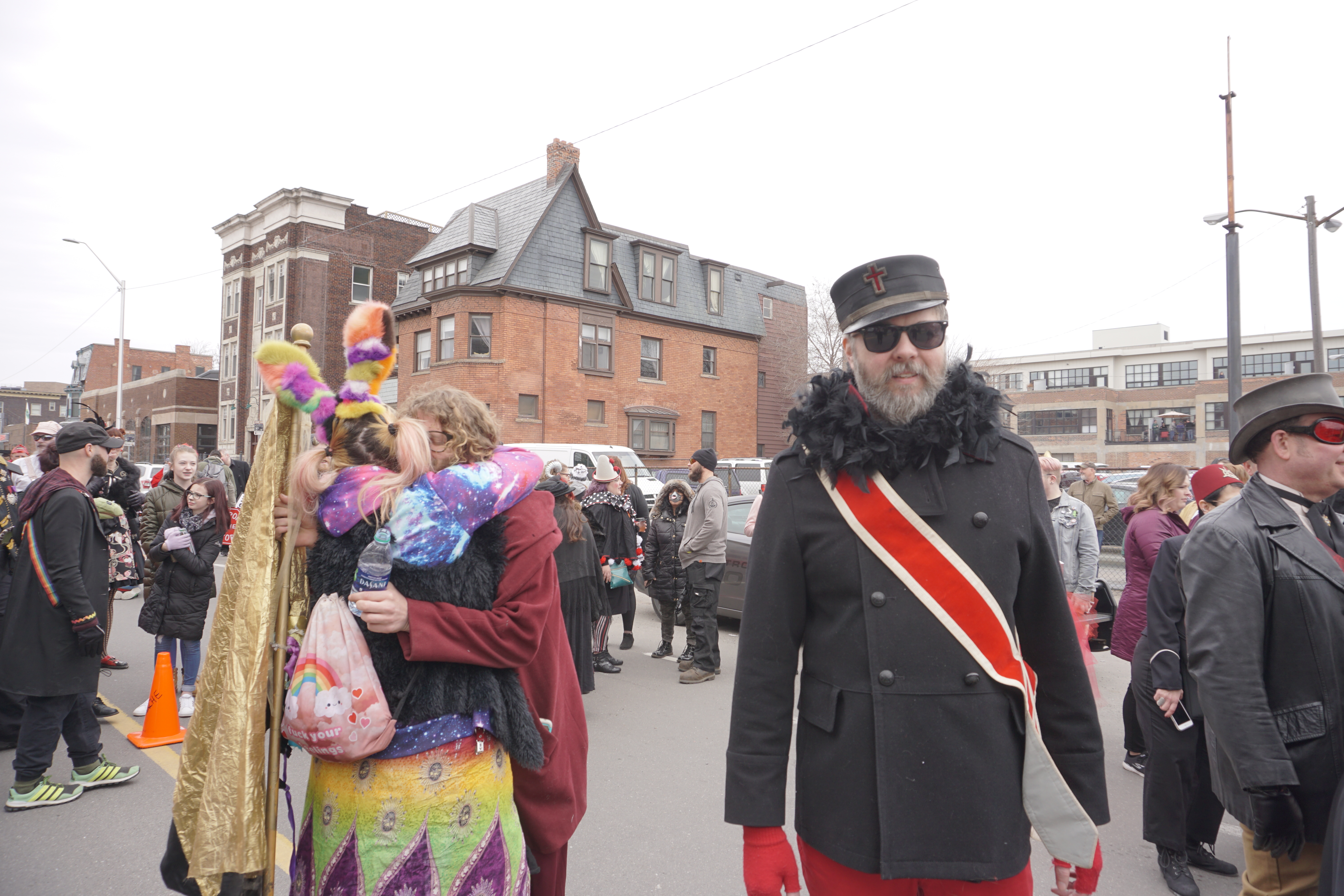 Theatre Bizarre founder John Dunivant (right) mingles on 2nd Avenue before the start of the parade. 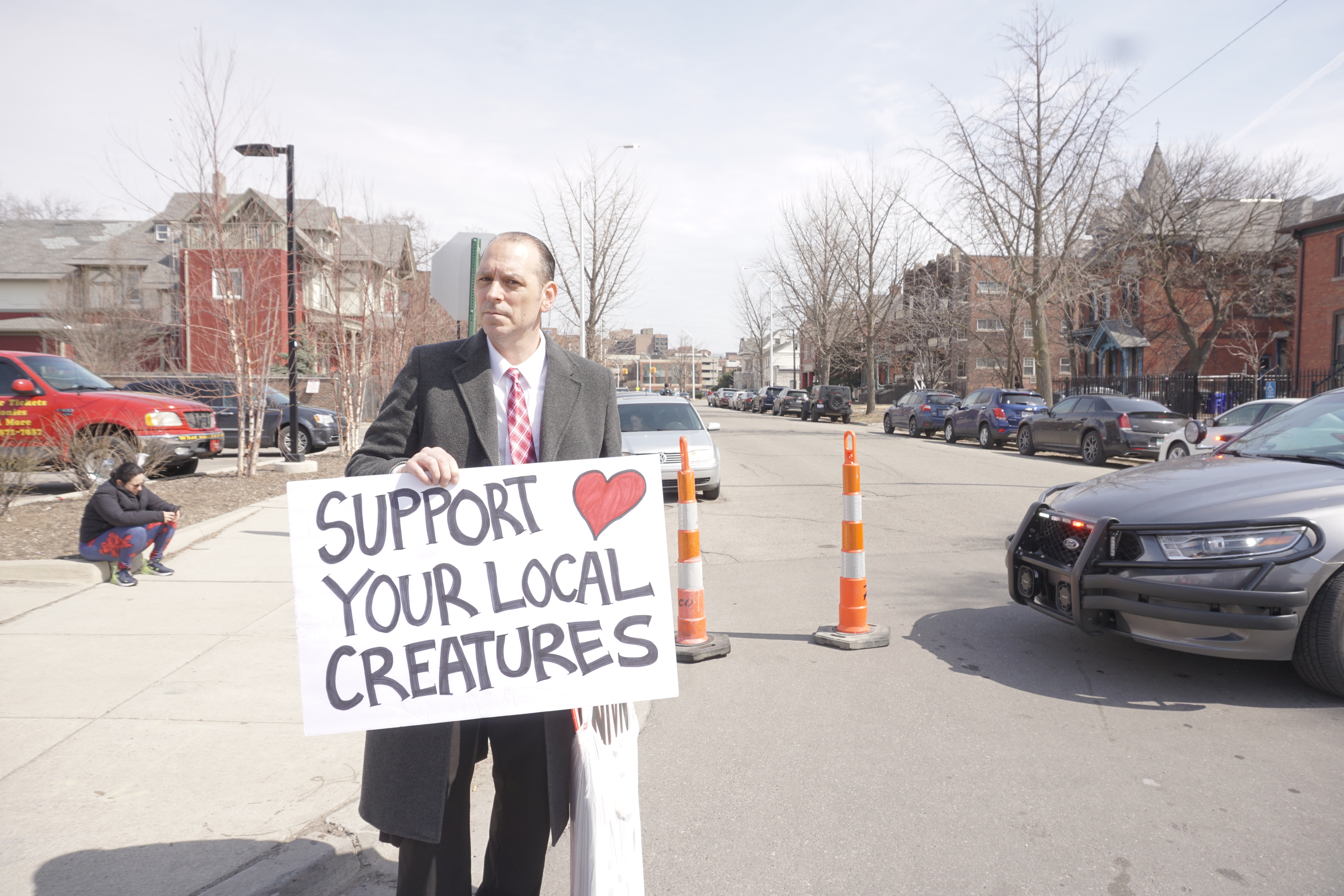 A paranormal enthusiast, John Tenney, prepares for the Marche Du Nain Rouge to begin while holding his counter-march sign.

A red demon whose presence indicates doom for Detroit may seem like a strange cause for organizing, but each March the idea of the Nain Rouge brings hundreds to the historic Cass Corridor.

The reason for this gathering is the annual Marche Du Nain Rouge. The Marche is an event run primarily by volunteers and occurs each year at the end of March. The event is a parade of sorts in the style of Mardi Gras, one that turns the spectator into a participant. This is one of the things that keeps Patrick Kage, 52, coming each year.

“It’s usually on a nice day, plus I enjoy getting to dress up and everybody being out and being part of it,” said Kage, who makes the trip from Sterling Heights each year with his friend Christopher Davison.

The event was started by Francis Grunow and Joe Uhl 10 years ago. The two wanted to draw upon Detroit’s French heritage for its own Mardi Gras-style celebration. So they used the ancient story of the “Red Dwarf” encountered by Detroit’s founder in 1701, who supposedly cursed him and the city.

With this as inspiration, the Marche was born. Now it serves as a place for music, costumes and dancing. The people running the event encourage attendees to participate in any way they can. From dressing up to bringing a human-powered parade float, the limitations of the event depend on participants’ creativity.

This year’s parade included thousands of dressed-up participants and volunteers, musicians, fire dancers and floats. One float was a small train operated by staff of another volunteer event that occurs near Halloween, a masquerade party called Theatre Bizarre. The man who runs Theatre Bizarre, John Dunivant, 48, said there’s a lot of overlap between the volunteer staff and attendees for both events. Dunivant’s favorite part of attending is the timing of the event and the level of participation, setting it apart from other parades.

“Everyone is kind of hibernating to some degree, and then running into so many people you haven’t seen and seeing people actually being in the parade as opposed to just spectating,” Dunivant said. “To those thinking about joining in: Come, work on a costume. Be your own parade.”

The float attracting the most attention during the parade was the one transporting the Nain himself, as well as those who had played the role in previous years.

As the float rolled down the street toward the Masonic Temple, the Nain taunted the audience with negative plans for the city, such as tearing down historic buildings to make more parking lots.

Among the crowd following this float were several people marching with signs countering the ideas about the Nain Rouge that drive the parade. These signs say things like “Be nice to Nain” or “Stop Nain shame!”

The group was led by John Tenney, a Michigan lecturer on topics relating to the paranormal and UFOs, who argues on his website, Weird Lectures, that the Nain is not the demon it is portrayed as.

“The origins of the Nain Rouge come from a Native American earth-spirit named Nanabozho, which is a little red rabbit,” Tenney said. “So when the French came here, obviously it wasn’t a Judeo-Christian god, so they changed it to a red imp or devil and now there’s a parade to drive out, incorrectly, the devil that causes the problems in Detroit.”

To Tenney, this celebration should be less about booing and catharsis, but more a celebration making people come together. To people like Diana Nader, a volunteer makeup artist for Theatre Bizarre who painted her face in preparation for the Marche, that’s exactly what the event has come to represent.

“I happened upon it once years ago and was wondering why on earth all these people were dressed up like this walking around, and now it’s my second time going on purpose,” Nader said. “My favorite part of the event is getting to see all the outpouring of creativity and unification in Detroit. It’s an example for Detroit to let its freak flag fly.”