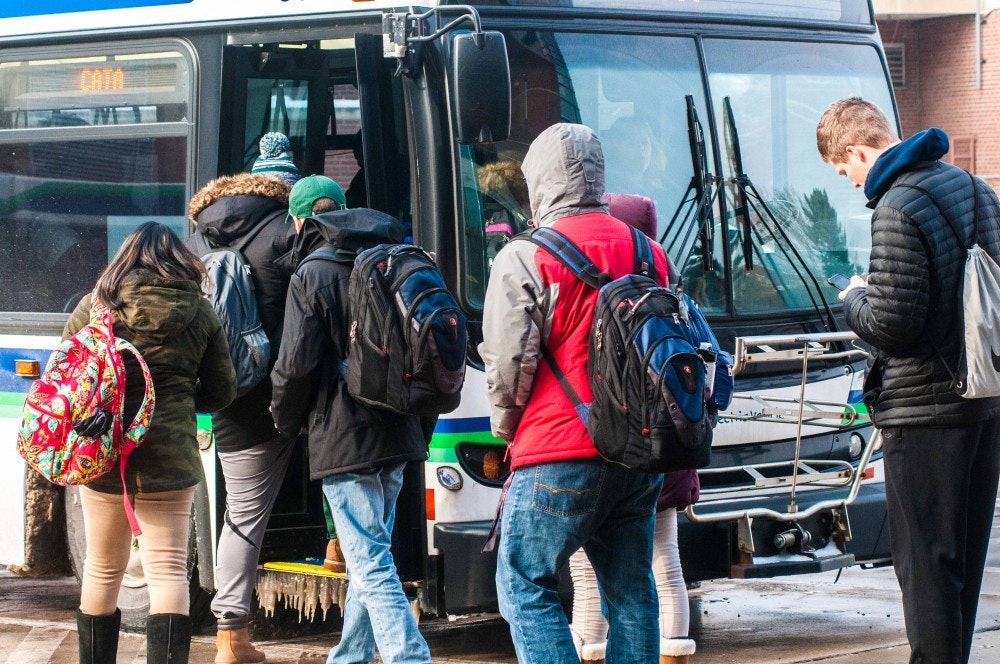 A group of students board a bus on Jan. 16, 2018. The Meridian Township Board of Trustees voted to keep CATA as the town’s transportation provider at the March 19 board meeting. A group of students board a bus on Jan. 16, 2018. The Meridian Township Board of Trustees voted to keep CATA as the town’s transportation provider at the March 19 board meeting.

Redi-Ride, an advance-reservation driving service, started the discussion about the analysis of the privatization of public transportation last meeting.

Clerk Brett Dreyfus said Redi-Ride was initially made with the intentions of providing transportation to inaccessible bus routes, but the town views it as a ride-share experience similar to Uber or Lyft, counteracting its original intention.

Redi-Ride is associated with CATA at this time, but talk of privatizing Redi-Ride, or using an already-existing, private transportation company, raised concerns from many board members.

“The idea of opening up the bidding introduces a whole set of complications between the concept of a public transportation system and a private system,” said trustee Patricia Herring Jackson.

Deschaine said the township should consider other companies, but thinks CATA is the best option.

“We’ve got 19 years of exceptionally good, quality service from CATA, at a fair price,” said Deschaine. “We are the elected board of this township. As elected leaders, our residents are looking to us for a recommendation of Redi-Ride. Quite frankly, most of them are too busy raising families and surviving this tough economy to have the time to investigate Redi-Ride alternatives for themselves.”

Deschaine said he has seen the negative impacts of privatizing public transportation. His daughter lives in Washington, D.C., where MV Transportation took over. The company billed the town for services they never provided, and reduced wages, leaving workers to live on food stamps.

Deschaine said he worries it will cause the township to spend more money in the long haul if they pick the lowest bid.

Clerk Dreyfus encountered push back when he said “this a fantastic opportunity.” “This isn’t a problem, and this isn’t a complication,” he said.

Dreyfus said he sees this as an opportunity for entrepreneurship, and advocated for a transparent process in selecting a provider. He said he doesn’t know why someone would stay with the same provider for 19 years without trying to bid.

“I disagree that the private sector can’t be used judiciously in partnership with the public sector to deliver better value, better services and better technology to the citizens,” Dreyfus said.

Dreyfus said the board needs to address their fear of competitive bidding.

Dreyfus referenced back to 2010 during the meeting. Dreyfus said the board told the community options will be on the table before the 2020 renewal of the transportation service.

“Nine years later, all those options were taken off the table, and we are doing the exact same thing again,” Dreyfus said.

Dreyfus made an amendment to change the language to reference “a service provider,” as opposed to CATA explicitly. The motion failed, as no one seconded to substitute the word CATA with a service provider.

The original amendment, which allows for the previously authorized .2 mills to maintain the Redi-Ride service for five years, was upheld by the board. The board also agreed to allow Township Manager Frank Walsh to negotiate a new agreement with CATA including the Meridian Township Transportation Commission’s recommended provisions.

The new agreement is set for approval by the Township Board prior to July 31, 2019.

“To the residents who came out today, we, I, hear you,” said trustee Courtney Wisinski.