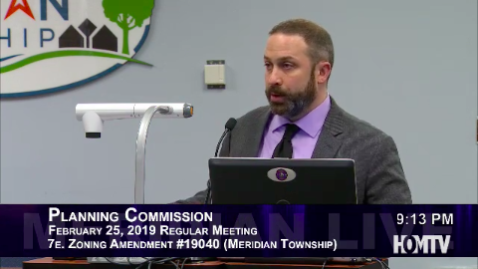 The setback permits for these buildings—such as Burcham Hills Retirement Community, Bickford of Okemos and other assisted living facilities—were the main point of contention.

Building setbacks are “the required separation between a lot line and a building or structure,” according to the County of Santa Clara Department of Planning and Development. “Setbacks vary by zoning district, and there are numerous exceptions to accommodate a variety or particular lot circumstances.”

Following the building height change to 60 feet, four stories, due to public input on setbacks, the Meridian Township’s Community Planning and Development Principal Planner Peter Menser explained the proposed change to the Code of Ordinances.

Menser said if a senior living facility is next to a single-family residence, all of the single-family homes must not exceed a height of two-and-a-half stories or 35 feet. “We took that and basically said any time a building is above two stories, there’s going to be an additional setback,” Menser said.

With the current ordinance, building heights are limited to that of the adjacent zoning district.

Menser said as the building height increases, it will be subject to more setbacks.

The staff report provided to the Planning Commission with information to consider includes “locations, number of units and approximate lot area for existing developments in the township,” Menser said.

A minimum lot area remains at 10 acres due to that being the approximate size of the concept-plan parcel, Menser said. This number is subject to change as more input is given.

Menser said the largest location is Burcham Hills in East Lansing on 38-acres, and the smallest is Bickford on three acres.

Balconies, decks, patios and porches cannot enter the setback region of the building, Menser said. They were allowed to encroach on the setback area prior, but this ordinance doesn’t allow for it.

A minimum distance between buildings is set at 50 feet, Menser said, but that, along with the majority of the logistics, is still open for discussion.

A 55 or older age restriction is set on the building. Menser said attorneys are looking into whether or not that can be changed. He said it is not a proposal in front of the Planning Commission, but a zoning change.

“I don’t know that we want to go that high for something this intruding into a currently residential zone,” he said. “I would propose a limit of three stories.”