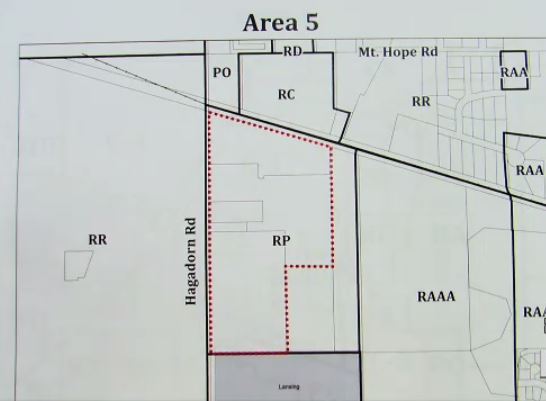 The Meridian Township Planning Commission discussed area five of six available as a potential site to rezone for medical marijuana facilities. Area five is located on the east side of Hagadorn Road, south of Mount Hope, which consists of a research and office park where only secure transport safety facilities would be allowed.

The Meridian Township Planning Commission on Feb. 25  kept in mind the best interests of residents as it debated proposals to rezone and redefine boundaries for proposed medical marijuana facilities.

Commissioner Alisande Shrewsbury suggested reevaluating what facilities are allowed in area five located on the east side of Hagadorn Road, south of Mount Hope, which consists of a research and office park where only safety facilities would be allowed.

“If you are looking to have minimal impact on residential areas, that is probably one of the most ideal places to take it sort of away from neighborhood,” Shrewsbury said. “If doing so excludes that property from some of the other uses that might be well suited to that area, I wouldn’t want to necessarily rule them out.”

Vice Chair Ken Lane disagreed and said not all facilities are best placed in research and office parks.

“(Office parks) sort of remind me almost like a fast food place,” Lane said. “It’s a lot of in and out, a lot of activity. I don’t see (provisioning) as a good fit in a research and office park.”

The township decided only secure transport and safety compliance facilities should be allowed in area five.

Issues in communication emerged as the planning commissioners were unsure exactly what the township board wants.

“I’m not sure what the board had in mind,” said Commissioner John Scott-Craig. “It seems like they talked about putting some of these facilities in places that other things wouldn’t want to be. The northern boundary there is the railroad tracks.”

Secretary David Premoe recommended a meeting with the township board to clear up misconceptions.

“We’ve been saying through this discussion that we’re making assumptions on what the board had in mind … I think that face to face communication on an issue like this would be pretty important,” Premoe said. “It allows them to clarify with us what they have in mind, and it allows us to give our feedback on that clarification.”

The Non-Zoning Ordinance and amendment

The Meridian Township Board voted on Feb. 19 to introduce the Medical Marihuana Non-Zoning Ordinance that covers operational restrictions and requirements for a permit from the township.

The township board also discussed Zoning Amendment #19030 that focuses on the approval process of marijuana facilities as well as the characteristics of the proposed business such  the location of the zoning districts and types of uses for the marijuana facility.

The township board determines the types of licenses and the number of permits, while the planning commission settles where these facilities can be located.

Growers are designated to only industrial zoned areas. Processors, provisioning centers, safety compliance facilities and secure transporters are allowed in industrial, commercial zones one through three and research and office parks zones.

Each of these facilities is only allowed in six overlay areas in the township.

Principal Planner Peter Menser said at a public hearing on Feb. 11, questions and comments were raised on what uses can be allowed where, as well as whether or not boundaries of the overlay areas are appropriate. The goal for the planning commission was to confirm and determine if overlay districts for the marijuana facilities were proper.

On March 5, Meridian Township Board members will further fine tune the non-zoning ordinance. Members felt that licensing information was missing, and a revision should be made with new language.

Due to this change, the ordinance will need to be reintroduced. If no further changes are made, final adoption may occur on March 19.