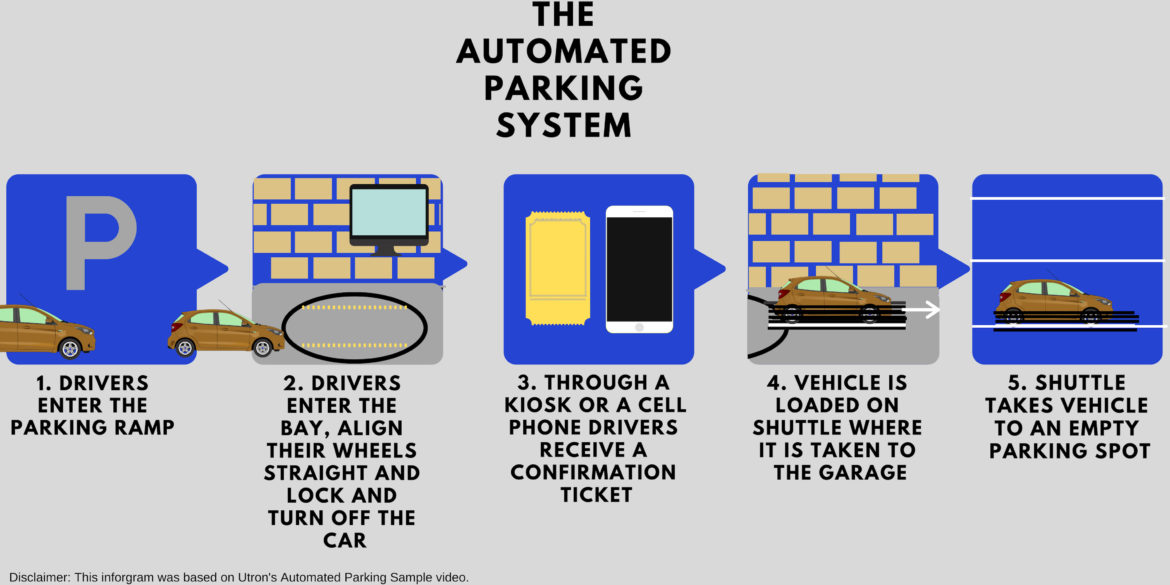 Vlahakis Development of Okemos and partner Royal Properties of Champaign, Illinois, plan to incorporate an automated parking system in each of their proposed buildings of The Park Place Project. The parking system at Park Place would not be restricted to residents. Public parking would be allowed.

These systems are common in cities such as New York, Chicago, Detroit and West Hollywood, California, though systems vary.

According to Vlahakis Companies associate broker Mike O’Callaghan, “We partnered with Unitronics in the planning of building this ramp because we feel they are a leader in the automated parking industry.”

Unitronics is well known for its West Hollywood ramp, which has a maximum retrieval time of five minutes. Michigan State student driver Josh Murray said, “An automated parking system would create more space which I’m fine with, however I am concerned about the cost. If East Lansing doesn’t get one that’s okay too because campus parking is fine with me.”

Unlike traditional parking ramps, this system parks the car for drivers. Through an entrance, drivers pull onto a circle. Drivers then have to park straight with the aid of a monitor.

After the car is turned off, drivers sign into a kiosk or phone app for a ticket. Residents would use their monthly permit. A lift takes the car up to a parking space and it is parked.

O’Callaghan said, “The automated parking system requires no human involvement, which means no human error. The only people allowed in parking areas are maintenance workers.”

The building would be monitored by a building manager.

For retrieval, drivers sign back into the app or insert the ticket into the kiosk where they’re informed where their car will be delivered. Driver who do not have the app or lose tickets, can use Unitron’s call-in service.

From there, a lift brings the car back down and drivers retrieve their car from a specific bay.

The automated parking system would provide more space, around 600 parking spots for both apartment buildings. In addition to more space, there would be no air pollution from cars driving around the structure.

Each part of the parking system works independently, so the entire system would have to malfunction to close the ramp down. The ramp also has a generator in the event of a power outage.

The ramps would use parking technology East Lansing hasn’t seen, such as lasers and automation. The ramps will learn the habits of frequent drivers.

In the morning, the cars of early drivers will have already been brought down.

Goldberg said the continuous movements of parts would move the excess snow and rain to drain from parking spaces, combatting accumulation. Cole Burkett of East Lansing P.A.C.E. said there should not be a problem with parking violations inside the structure because parking will be automated.

Park Place East and West parking ramps will each have four stories. The ramps would be made of concrete, not traditional steel racking.

The cost of this automated parking ramp varies because of many factors. However, since the proposal is public-private, the project would be funded by the developers.

East Lansing residents would not pay for the project, but for public improvements such as nearby roads and utilities through tax increment financing. Tax increment financing is the use of additional property taxes to fund development projects, according to city documents.

Does East Lansing have the big-city traffic bustle to justify an automated parking system?

“It will be necessary in 10 years, but not now,” said Tao Deng, a Michigan State University doctoral student. For Asmita Pant, Michigan State University researcher, the technology of the automated parking system delighted her while she visited Detroit. “I liked how you could add minutes to your parking spot from your phone and specify a reason to move between spots,” said Pant.

“I feel there is enough open parking space already, however if they decide to build a ramp, build a regular one.”

Meadows said East Lansing will have a real downtown after construction is finished. An automated parking system would contribute to a new look for downtown East Lansing.