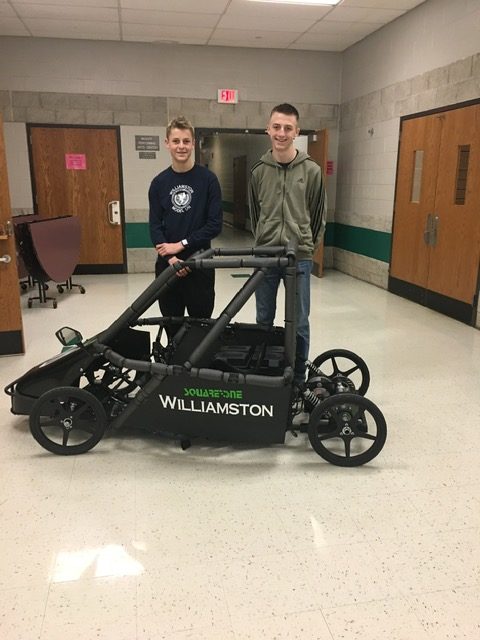 Jack Schafer (left) and Owen Gulick (right), are two of the 20-member Williamston IVD team pictured with their kart that was showcased at the 2019 Detroit Auto Show.

Ever since she can remember, Andrea Gulick, mother of Williamston High School sophomore Owen Gulick, her son has been creating things.

“He has always had the ‘math and engineering brain,’” Gulick’s mother said. “The Williamston Innovative Vehicle Design team was a great outlet for him to be able to use those tools and excel in something he loves.”

Gulick and his teammate, Jack Schafer, are two members of the nearly 20 students at Williamston High School who participate in the IVD team that won the SquareOne competition that took place last spring at University of Michigan’s test track. Recently, the team was showcased at the 2019 Detroit Auto Show. Jack Schafer (left) and Owen Gulick (right), are two of the 20-member Williamston IVD team pictured with their kart that was showcased at the 2019 Detroit Auto Show.

“I liked talking to different people, different investing groups, different manufacturers and seeing their inputs on the kart,” Gulick said. “We talked to a couple of different chain companies to see how we can improve our chain-to-drive system for the future.”

The Williamston IVD program is beginning its fourth season under the advising of Steve Kersten who teaches math, robotics, programming, and engineering classes at Williamston. He is also the varsity football coach.

Kersten said that there are several competitions within the competition and one of the events was an hour long race where battery life and efficiency are evaluated. The kart that covers the most ground wins.

Schafer joined the team last year when he was a freshman and has enjoyed working on the project with the other members ever since.

Schafer said that the kart that was built two years ago had some problems; however, the kart that was showcased at the auto show was made with a frame the team purchased. The sophomore said this helped the team to focus on other aspects of the kart.

Gulick said the team was able to focus their time on different parts of the production since they chose to spend the extra money in buying the frame.

“We were given $2,000 for the project and ended up spending just under $5,000 dollars,” Gulick said. “Buying the frame helped because we were able to spend more time on efficiency and our electronics.” Owen Gulick and Jack Schafer work on electrical aspects of their kart. This will be the fourth year the Williamston team has participated in SquareOne’s competition.

The team worked on fundraising to earn the extra money they needed to produce the kart that won the competition. The team had letters sent out to people and had some leftover money from the previous year due to a car wash.

The Williamston IVD’s kart operates off of an electric motor, that is similar to a golf cart, and the throttle is electric.

The team recently bought a raspberry pi or an advanced circuit board. Schafer said that they plan to build their own computer on the kart which will monitor all of their power, wattage, voltage, and amps.

Since the team is looking to improve its kart design for future projects, Gulick said the team faced the challenge of having to get parts machined and made for their kart on the back end because of the frame they purchased.

“The mounting of the motor, wheels, and the back end was challenging because the frame was built for a gas motor,” Gulick said. “We had to convert everything to be able to work for our electric motor.”

The Williamston IVD team hopes that SquareOne continues to fund and operate the project, as this will be the teams fourth year participating in the event.

“Our kart and sensor systems get better every year,” Kersten said. “This year we are ahead of schedule on the kart running well so we have more time to focus on our sensor systems and on testing and optimizing performance.”

Although Schafer and Gulick have an interest in pursuing the program in high school, they are unsure if their paths will lead them into an engineering field.

“No matter what Owen ends up doing,” Gulick’s mother said. “I know he is destined for great things.”