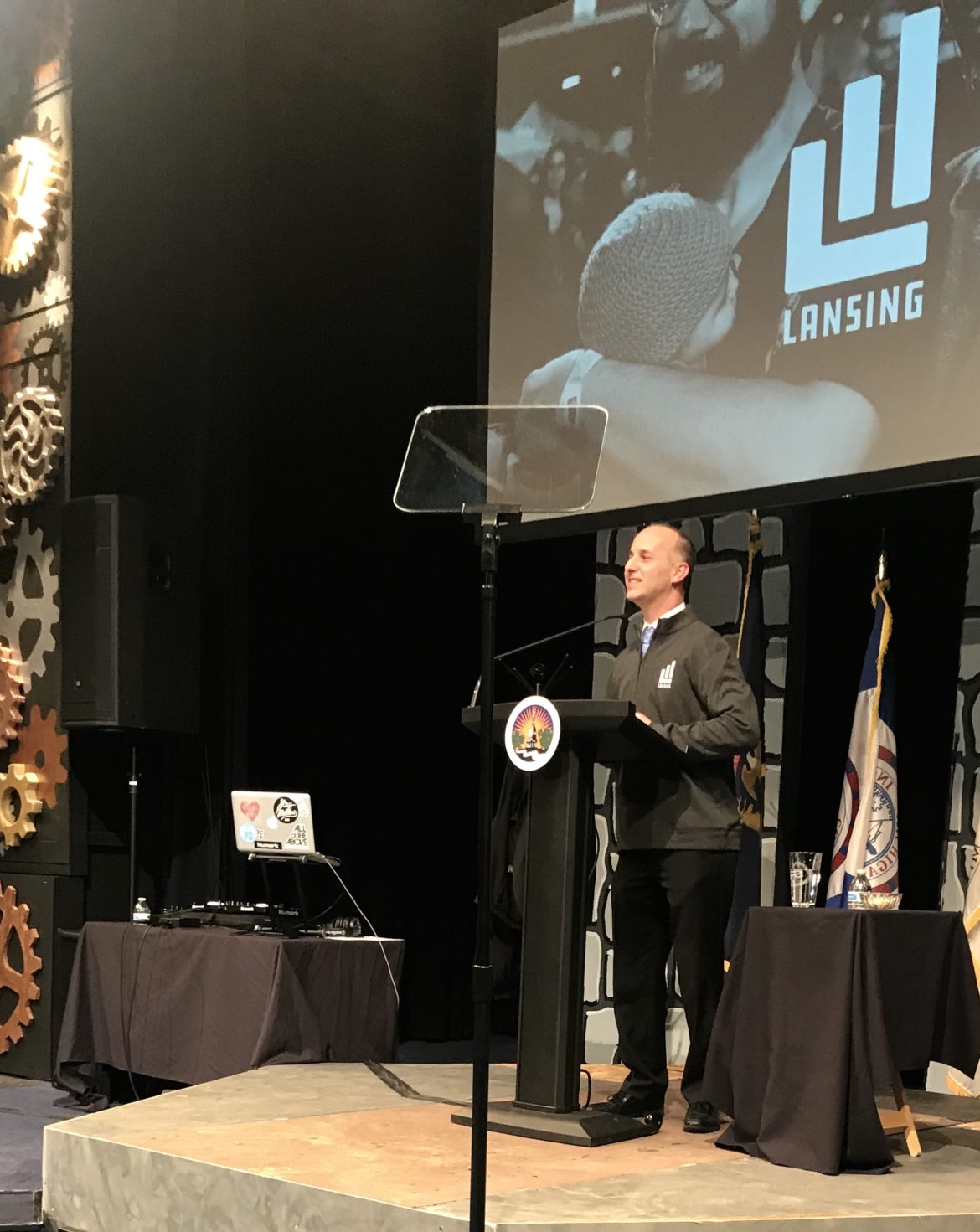 Lansing Mayor Andy Schor giving his State of the City speech at Riverwalk Theater. Schor is wearing Lansing apparel featuring a new logo that was designed by Redhead Studio Design, a business in Lansing.

Schor emphasized the arts, diversity and community in his speech.

Dustin Hunt, an educator and designer in Lansing, said the speech was inspiring.

“It was cool to hear how the arts and culture are being considered in the city,” he said.

Hunt said he was excited to learn about the investments Schor discussed during his speech.

These investments include $41 million in a new Meijer grocery store, a hotel and an apartment complex project which Schor said has created new housing and employment opportunities.

Schor also highlighted the compassion of the Lansing community while saying how the city overcame emergencies including a major flood and a deadly fire in Lansing public housing.

Adam Williams, executive director of Christians of Greater Lansing, a non-profit Christian organization, said he was impressed that Schor complemented the impact Lansing residents have had on the city and likes that Schor has given residents methods to help the community.

“I love how he was able to identify the impact of having everybody at the table to move the city forward,” he says, “I like that he has different areas that everyone can fit in to help.”

Williams also liked Schor’s plan to create a commission for the faith community.

The Interfaith Advisory Council, which is to be run by the Lansing Office of Community and Faith-based Initiatives, will give people who do not feel comfortable contacting Schor or attending community meetings an outlet to voice their problems with Lansing.

Schor concluded with a video that celebrated the individuality of Lansing residents and presenting his goals. These included advancing Lansing’s diversity and employment opportunities, improving the quality of public spaces, and diversifying living options to fit the needs of more residents.

What makes Sheridan Leinbach, a student at Lansing Eastern High School, optimistic about Schor meeting his goals is his liveliness and involvement with Lansing citizens.

“I think we are definitely going to see improvements in the city,” she said, “what stands out to me [about Schor] is his outreach with the community. He is not just sitting in his office where we can’t see him. He is out in the public and we see him doing things. He’s communicating with people and opening things up to everyone.”