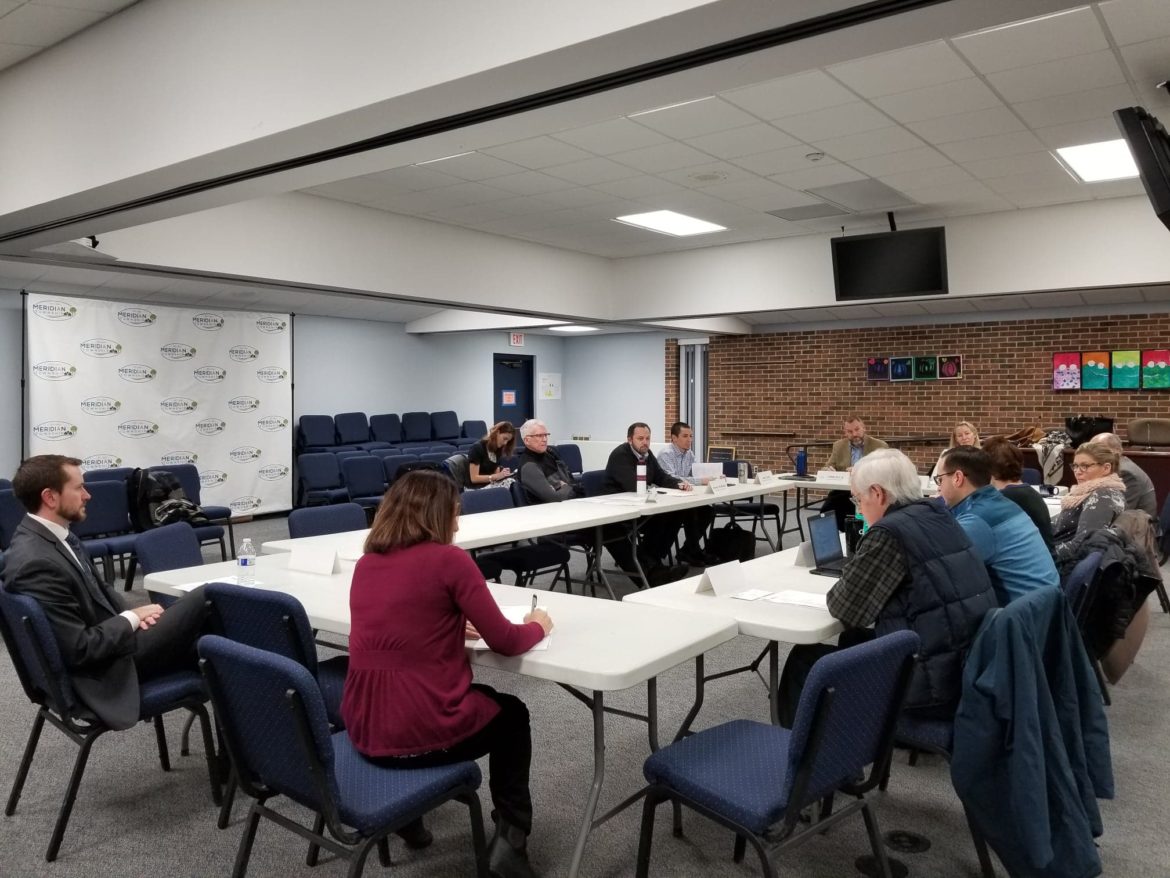 EDC Board members discuss topics at the Feb. 7 meeting in the Town Hall room of the Meridian Municipal Building EDC Board members discuss topics at the Feb. 7 meeting in the Town Hall room of the Meridian Municipal Building.

Despite the icy conditions, the Economic Development Corporation still met to discuss the roads they just traveled and the financial potential of medical marijuana.

Since the word from the state capital is that there’s not any money left for road repairs, the township will need to look to residents for help in paying the bill through taxes.

EDC Director Chris Buck talked about how the goal is to make Meridian Township debt-free in 10 years. To do this, the township will increase taxes for road repairs.

Residents are for the tax increase, and with the right kind of communication, this goal is possible, said Buck and other board members.

“Townships need to partner with the road departments,” said Buck. “The county decides where to spend money.”

With roads constantly in need of repairs, making temporary fixes racks up taxpayer money and costs citizens more in the long run. Buck said the township is underfunded in road repairs by $30 million to $35 million.

Deschaine said the board is looking to present a road millage on the ballot later this year.

Also on the agenda, the township ultimately decided to go forward with the medical marijuana ordinance as opposed to other cities and townships, which are trying to block the process from going forward.

Chair of the EDC Jade Sims said the township should not make the same mistakes as Lansing in  regard to medical marijuana as it resulted in the city “not smelling the best.”

“Statewide, the township is moving forward a lot more quickly than others,” said Sims. “From a business standpoint, there’s going to be a lot of opportunity there, and it needs to be done in a smart way.”

Trying to find a process that appeases both sides and keeps communities safe is the end goal for the board. Setting zoning ordinances and application processes are things that need to happen before anything else does. Buck did not say a timetable was set in stone and said everything varies based on what and when decisions get made.

“Slow and right is better than fast and wrong,” said Buck.

The EDC is also trying to connect with the public schools to increase interest in business activities.

A program that the EDC was able to get off the ground is called “5 Minute Tops.” Based on the show “Shark Tank,” students have five minutes to pitch their business idea to judges. The winners will get actual cash prizes. The board would like to see it expand beyond Okemos High School.

“We’ve been talking about getting more involved with the schools and we haven’t done that yet,” said Sims. “We didn’t have the opportunity last year so now that’s starting to move forward.”

The event was supposed to be held on Feb. 12 but was postponed due to school closings. Sims was unsure when the event will be rescheduled.

The board will meet again on March 7 at 7:30 a.m. in the Meridian Municipal Building in the Town Hall room.