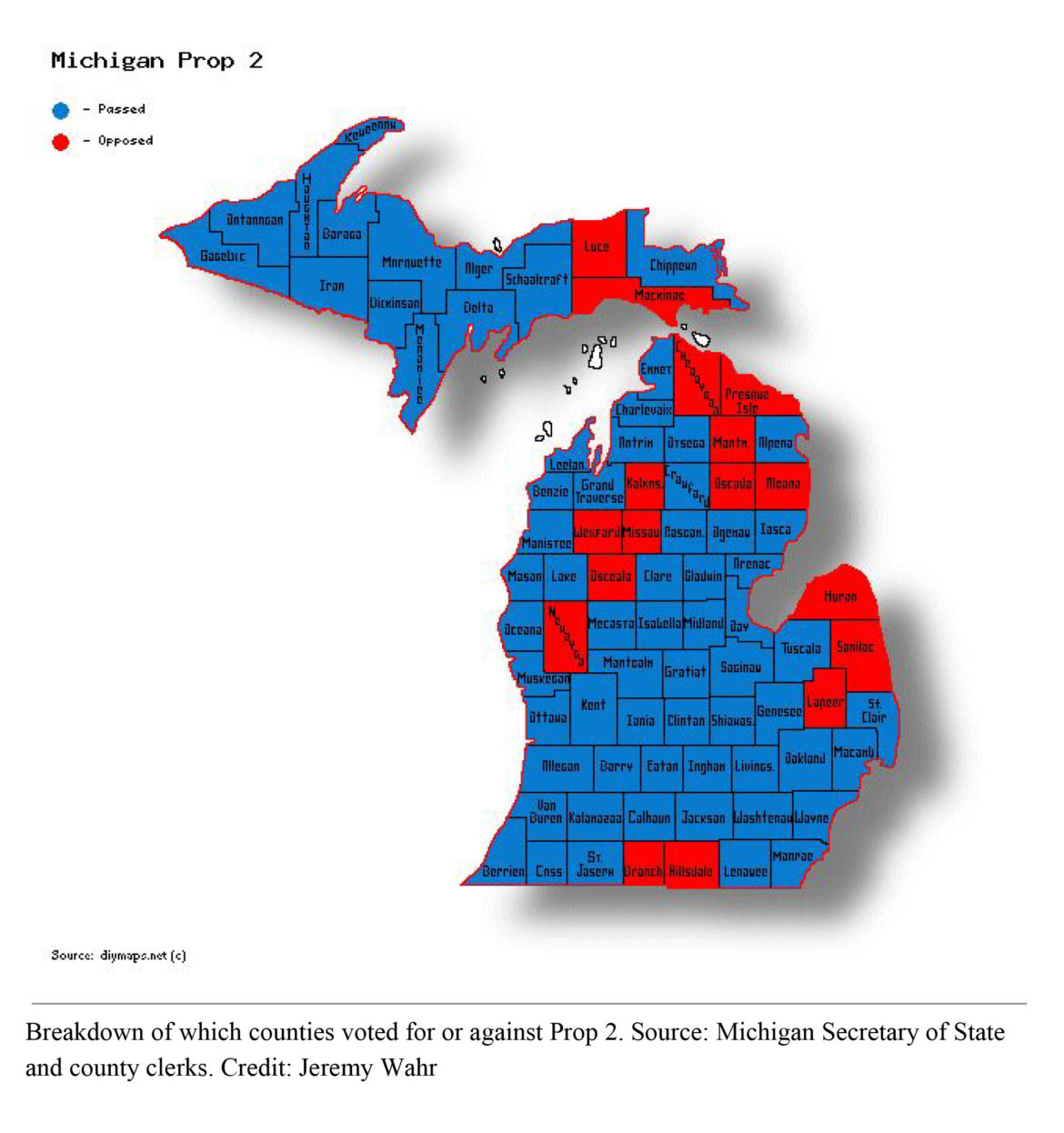 Breakdown of which counties voted for or against Prop 2. Source: Michigan Secretary of State and county clerks. Credit: Jeremy Wahr

Two years after a Facebook post inspired a statewide grassroots movement, Michigan voters approved Proposal 2. The proposal ends gerrymandering and will take effect in time for the 2020 elections. A long process is expected.

Gerrymandering is the process of drawing voting districts that benefit one group over another. The party in control of the state legislature can draw district lines so its members have more representation in the state and national Congress than they do among voters, creating a cycle of uneven distribution.

Corwin Smidt, an associate professor of political science at Michigan State University, says gerrymandering does not apply only to political parties, nor is it necessarily a bad thing. “By definition, the federal U.S. government has required, or recommended, that we draw districts that gerrymander in favor of race and African-American representation, for minority-majority representation,” he says. “One person’s gerrymandering is another person’s affirmative action.”

What is Proposal 2?
Michigan voters effectively decided to end gerrymandering by approving Proposal 2 in the Nov. 6 Midterm Elections. Proposal 2 calls for an amendment to the state constitution that would create a commission that would be responsible for redistricting, as opposed to having elected legislators redraw the districts for themselves. The 13 commission members would be randomly selected from applicants screened to make sure there is no conflict of interest. The commission will consist of four Republicans, four Democrats, and five independent voters. The committee will create new districts after each census beginning in 2020.

started the movement to end gerrymandering in Michigan. Th group professes to be non-partisan but that was brought into question by a Aug. 31 article by Jonathan Oosting of The Detroit News; of the group’s 10 board members, seven have donated to Democratic candidates since 2005 and none have donated to Republican or third party candidates. Support from Both Parties
The movement has supporters from both major political parties. The Michigan State University College Democrats supported Proposal 2, inviting Voters Not Politicians members to campus to speak with the club and urging its members to help knock on doors to gain signatures. The Michigan State University College Republicans declined to take an official stance on the proposal, due to the proposal’s nonpartisan nature. However, prominent Republican including Arnold Schwarzenegger, governor of California from 2003-2011, have made gerrymandering central to their platforms. Schwarzenegger promoted Proposal 2 in East Lansing in October. As governor of California, he championed a similar measure there and said he is pleased with the results. “It reformed the system. We did the redistricting through a citizen commission and it was extremely successful,” he told Michigan voters. “Now, the Democrats and Republicans are getting along better. We don’t want them to get along too well and kiss, but we want them to get along and get the work done.”

Proposal 2’s Journey
The movement for what became Proposal 2 began in November of 2016. But before appearing on the statewide ballot, Voters Not Politicians needed to demonstrate a wide desire for anti-gerrymandering legislation. For a proposal to get on the ballot it needs approximately 315,000 petition signatures. After gaining approval from the state Board of Canvassers and Bureau of Elections, the first petition signature was signed in August of 2017.

“Within 110 days, we had gotten 428,000 signatures,” said David Hopkinson, Voters Not Politicians’ regional field director for mid-Michigan. Though Proposal 2 surpassed the needed signatures, it faced legal challenges before it was allowed on the ballot. Citizens Protecting Michigan’s Constitution v. Secretary of State was heard in the state Supreme Court on July 18, 2017. Citizens Protecting Michigan’s Constitution argued the proposal would alter the state constitution too drastically for a ballot measure. The court ultimately decided in favor of Proposal 2 in a 4-3 ruling with a bipartisan majority. The proposal then passed with a 23-percentage point margin in the 2018 election and is scheduled to go into effect sometime after the next census is completed in April of 2020.