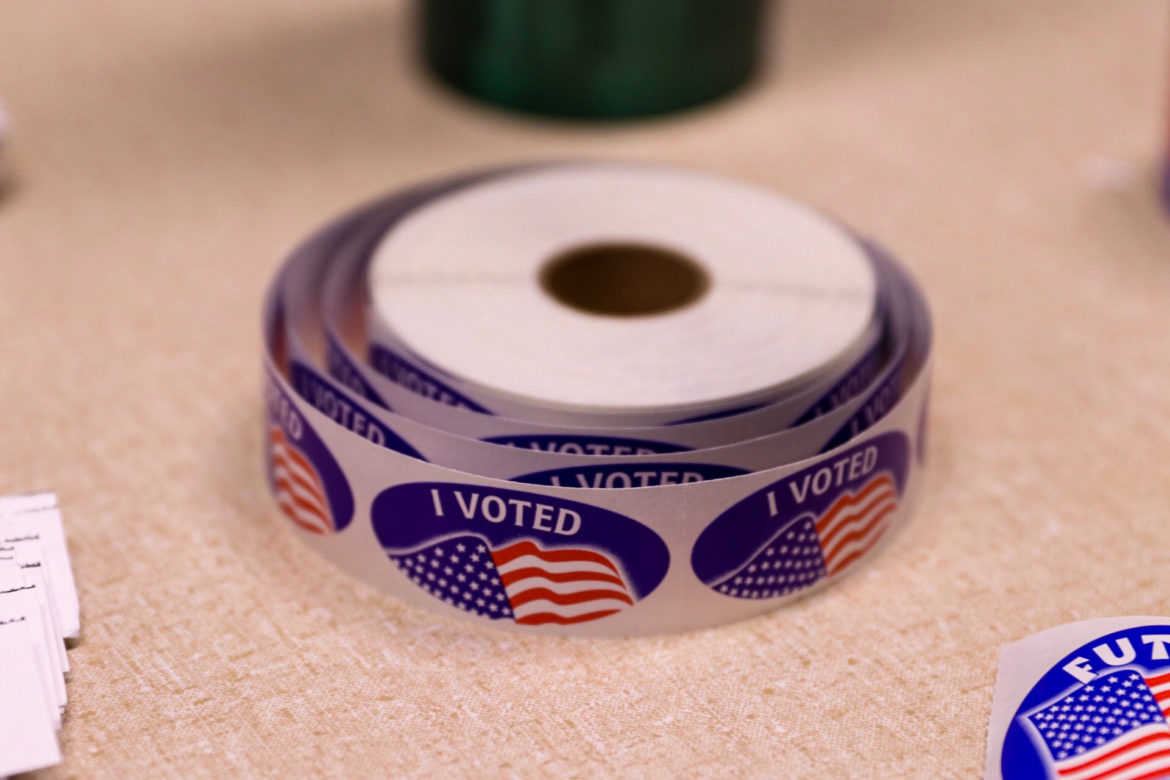 A role of stickers for voters sit on a table at a voting precinct in Delhi Township.

The 2016 presidential election was a polarizing time for the country, and Michigan was no exception.

Donald Trump won Michigan by 0.3 percent, taking the presidency with him by a margin of fewer than 10,000 votes, according to the New York Times. In contrast, Barack Obama won Michigan by 9.5 percent in 2012, netting roughly 450,000 more votes than his runner-up.

While partisan shifts are apparent in results, changing participation among Michigan’s voter demographics could provide more insight into the state’s level of civic participation and how it ranks alongside the Midwest and the rest of the country.

This downturn in registration translated to voting on a national level as well: 61.4 percent of American citizens voted in 2016, down from 61.8 percent in 2012. The state average fell from 62.9 to 62.4 percent.

In both these measurements, Michigan ranked above average compared to the nation. However, Michigan’s totals are down from 2012, when the state reached 77.8 percent registered and 66.8 percent turnout.

Among Midwestern states, Michigan fell roughly in line with the average in 2016, ranking seventh of 12 in percent registered and fifth in turnout. The Midwest as a whole averaged about three points higher registration and turnout than the country that year, with 73.5 percent registration and 64.1 percent turnout.

Among the 18 to 24 demographic, states averaged 55.9 percent registration and 43.3 percent turnout in 2016, when the 10 states with less than 100,000 people in the category were removed from the equation. Nationally, 55.4 percent of the youngest voting-eligible citizens were registered and 43 percent turned out.

The older the demographic, the more civically engaged: Generally, each age bracket’s registration and voting was greater than the next youngest in both elections.

The 18-to-24 demographic was consistently the lowest in terms of both registration and turnout. At 43 percent nationwide turnout, about 30 percent less of this demographic voted in 2016 compared to the most active demographic, comprised of those aged 65 and older, 73.2 percent of whom voted nationwide.

In Michigan, this problem seems to be even worse. While fewer people voted in 2016 than in 2012, both the youngest and oldest demographics saw an uptick in voters nationally. 41.2 percent of youth citizens voted in 2012, while 43 percent of them did so in 2016. This trend did not persist in Michigan: Not only did Michigan have a much steeper overall decrease in voting percentage than the nation, the proportions of voters from both those demographics also fell. This was especially dramatic in Michigan’s young voters: While 44 percent of them voted in 2012, only 37.8 percent of them voted in 2016, more than five points below the national average, the average state, and the Midwestern average. As most of Michigan’s other demographics are typically around or above the national average, this lapse in youth vote seems to be the most striking trend in the data.

Michigan’s black voter registration and participation were slightly below the national totals in 2012, but moved slightly above them in 2016. A smaller percentage of Michigan’s Asian population was registered in 2016 than in 2012, but a greater proportion of that population voted in 2016.

The Hispanic outlier and data veracity

A smaller percentage of Hispanic citizens were registered and voted nationally in 2016 than in 2012, but Michigan’s difference is absolutely drastic. Michigan’s total Hispanic registered voters, and the number of whom voted in 2016, are almost half of what the totals were in 2012.

The CPS data lists Hispanic citizen registration and voting in 2012 Michigan at 86 and 70.3 percent respectively, the highest totals in the nation. In 2016, the data places Michigan roughly in the middle of all states with 49 percent registered and 36 percent voted.

“You need to take margin of error into account,” Bauman said. “We’re no more accurate than that.”

While the margin of error contained within the data might not entirely explain the massive gap between the two years, as the numbers still don’t meet at the most extreme ends of the margins of error, Bauman said he’s done separate research that shows the CPS’ numbers might be even less accurate than the margin of error for specific racial demographics.

“(The current population survey) is not a magic database; it’s a survey, it has margins of error just like any survey, and we don’t know for sure what the real number is, we’re trying to estimate those numbers,” Bauman said. “For a lot of these numbers, there aren’t a lot of stable cases from which to make estimates, and we want to make sure people are trying to be cautious about that.”

Turnout in the 2018 midterm election was at a record high, according to Rey Junco, a senior analyst at the Center for Information & Research on Civic Learning and Engagement, or CIRCLE.

“We certainly saw a huge difference in turnout for the midterms this year,” Junco said.

CIRCLE doesn’t measure data by states, Junco said, so he could not speak to the veracity of the CPS data for Michigan’s youth vote. However, he confirmed the youth vote grew nationally in 2016.

“I think there’s this narrative that youth aren’t engaged, that they’re not interested, and that they don’t vote,” Junco said. “I think we’ve been out there showing with our data that that actually (isn’t) the case. There’s a few kind of ‘myths’ I think that we dispel.”

A wave of youth interest in politics had spread since 2016, Junco said.

“There have been certainly movements and issues that young people care about, the one you hear about as the most prominent example is the March for Our Lives and the Parkland movement, and so there has been kind of this snowball effect of participation,” Junco said. “You see more youth engagement in those kinds of campaigns and causes, and more what we would call activism, and that was translated into voting.”

There’s no way to know, however, if this youth enthusiasm will carry into the 2020 presidential election, Junco said. But that doesn’t mean it won’t.

“As I like to say, one data point is not a trend,” Junco said.

“One thing we do know is that there were a large number of first time voters, and we do know that when people vote they will continue to do so, and the earlier they do that, the more likely they are to continue to do so… If the energy does continue in this direction, we will certainly see more of that in the future.”

Ingham County Clerk Barb Byrum said she didn’t perceive an increase in youth engagement in 2018, but instead felt the entire electorate was passionate.

Byrum attributed the surge in enthusiasm to an overall need for voters to engage with the process following the 2016 election.

“I think the average voter had been getting fed up and sick and tired of the same plans to privatize, and cut cut cut, and not invest in infrastructure, in education and things they hold dear,” Byrum said. “I think all of the citizens… had seen what happens when they don’t participate. And as a result, we saw high voter turnout.”

This feeling of not being heard extends to youth voters as well, Byrum said. She thinks people have realized their participation matters, and so does every vote.

“I think people have realized that some of the worst elected officials get elected by individuals who don’t participate,” Byrum said. “And it’s hard to complain when you don’t vote.”

As an election official, Byrum constantly encouraging people to register, vote absentee, or get to the polls. She wants all qualified registered voters to exercise their right to vote, so was encouraging to see such a high turnout in November, she said.

“It’s something that I do because I feel it’s very important,” Byrum said.

While it will be quite some time before the Census has accurate data about 2018’s voting demographics, a ballot measure to make voting and registration easier, Proposal 3, passed easily with 66.8 percent voting “yes.”

Proposal 3 was designed to remove barriers to voting in Michigan, said Kim Trent, spokesperson for Promote the Vote, the organization which spearheaded the effort to pass the proposal.

“This is really about modernizing voting in Michigan,” Trent said. “At one point, Michigan was kind of the leader in voter access, and now we’ve kind of fallen behind, so this is an opportunity for us to catch back up again.”

Among the provisions provided in the proposal are no-reason absentee voting, automatic opt-out voter registration when receiving a driver’s license or ID, and restoring the option to vote straight-ticket.

Adopting same-day registration, another provision included in Proposal 3, will increase average turnout by five percent, said Sharon Dolente, a voting rights strategist at ACLU of Michigan who worked with Promote the Vote.

“I’m of the mind that I want every single eligible citizen to make their voice heard,” Dolente said. “Five percent is a big number if the number that you’re taking five percent of is large, right? So, you’re talking about hundreds of thousands of people participating.”

Looking at the CPS data, nearly 10 percent of Michigan’s registered voters did not vote in the 2016 election. Time will tell whether Proposal 3’s fixes will translate to more participation among Michigan’s electorate.

“Michigan has a pretty high voter registration rate, we just have a low voter participation rate,” Trent said. “All this would do is allow those people who are already eligible to vote to have more opportunities to have access to vote.”

Through the U.S. Census Bureau’s Current Population Survey, or CPS, data estimates for voter demographics are publicly available online. Data sets from 2012 and 2016 are used in this analysis, comparing voting populations by age, race and sex. For each demographic, Michigan’s turnout and registration are compared with the nation’s totals, the average state, and the average Midwestern state.

Totals differ when considering a state’s total population, including non-citizens, but for the sake of accurately counting potential voters, only each state’s citizen population was considered.

Totals for races “in combination” were used for non-white groups rather than specific races alone. This will encompass anyone who identifies as a particular race at least partially, and since percentages are being used, no overflow will occur. This will also help alleviate small sample sizes for some racial demographics.

Data from 2016 was rounded to zero if a given number was fewer than 100,000, which might skew averages in some age groups and made most racial averages too skewed to be reliable.

Data from 2012 was rounded to zero if the number was fewer than 75,000, which might also skew averages slightly based on what is and isn’t included.