When a group of Okemos high schoolers raised funds to install solar panels at their school, they had no idea they would inspire Meridian Township to follow in their footsteps.

The Okemos project caught the attention of Meridian Township Board Supervisor Ron Styka and ultimately led to a new solar panel array being constructed in front of the township Municipal Building in October. Key points on the steps leading up to the solar array installation and the how this installation will impact the township’s carbon footprint.

“I happened to be driving by the high school and noticed the panels on the roof,” Styka said. “I contacted the current president of the Okemos School Board and he told me how the students led the movement to get it up there.”

According to a WLIX article from Mar. 10, 2017, the Okemos students raised more than $70,000 for their school to have this renewable energy source.

Former Okemos High School student Miles Bolton said: “Part of the motivation to do it was that it is very visible where it is. We were one of the first schools in our area to do something like it. It is cool to be the leader in that way for others to have something to work towards.”

Styka discovered that the cost of the renewable energy resource was more affordable than he expected.

“It sounded pretty reasonable and a good way to get started in the solar world so I proposed it when we did our annual budget meeting a year ago and the board went along with adding it to the budget,” said Styka.

From the moment Styka introduced the idea to the township board, it took about nine months to see the final product. Standing in front of the government offices, the new solar panel array is providing energy for the Municipal Complex, Township Treasurer Julie Brixie said.

“The size of the array that we have does not generate enough electricity to power the complex but it does reduce our energy draw from the regular system,” said Brixie.

Meridian Township projects that this installment will shrink the township’s carbon footprint by 548 tons.

“When we went through our budget process last year for this year’s budget, we made the decision to include money for a small solar installation at the township,” said Brixie.

Meridian Township reports that the budget for the solar panel array was $50,323.

Although this was a high initial cost, CBS Solar expects the township will be saving $143,227 in utility costs over 25 years.

In addition to the array, Environmental Programs Coordinator LeRoy Harvey said that Meridian Township has added a website where anyone can watch how many kilowatts of power the panels are generating live.

He said: “Modern technology allows us to visually see how much energy is being produced at this very moment. When the sun comes up, we can see how the energy starts to increase coming from the panels. When a cloud goes over, we can see a decrease.”

Harvey says that this was a good time to invest in a solar panel array.

He said: “The prices are low compared to what they have been in the last decade. There is a 30 percent tax credit right now. There is also favorable net metering legislation. For every extra kilowatt hour that you produce, you will get a full credit for what you would have paid for that kilowatt hour had you just used the regular utility power from the grid.”

Okemos residents Heidi Porter and Chris Moyer said they decided to install solar panels on to their home due to this reason.

“We wanted to reduce our carbon footprint and we got into the net metering program so financially, it made sense,” said Porter.

Porter was also a part of the Meridian Energy Team so she was well aware of the financial benefit of being able to use excess solar energy, generated by their panels, for a later use.

Porter said: “What happens for us is that we produce so much solar energy in the summer that we do not have a electricity bill at all during that season because we generate it out to the power company during the day. Porter explained that it is called net metering because the energy that their solar panels generate during the day can also be used at night.

She said: “Although, we do not produce all our own energy, we have a negative bill during the summer. We basically spend that credit during the winter. We do not spend any money on electricity from May to September because of net metering. In the winter, they start taking off our credit.”

Moyer said the solar panel installation only lasted a day.

“They put anchors down on the roof,” said Moyer. “Then, they put rails on it and the solar panels literally just snap on.”

Although the solar panel array was a powerful step in the right direction, Township Trustee Patricia Jackson said Meridian Township’s climate action plan, which was adopted in 2017, offers up many more ideas to achieve a goal of 100 percent renewable energy.

“That is only part of the story because the township has a master plan that promotes environmental sustainability in many areas,” said Jackson. “As a township, we are committed to using that master plan to guide our decisions.”

Harvey said that this is only the beginning for him and his team.

“There is about a 100 different things that we have been looking at to reduce greenhouse gasses while also saving money,” said Harvey.

Styka said that installing more efficient heating, cooling and air ventilation is a priority for the township.

“We are going to be upgrading the heating and air conditioning systems in our buildings,” Styka said. “It could be that that will be the next steps.”

Harvey said that this is an exciting time for the township.

“This is an overall movement amongst the township board, the township staff and the general public to look for ways to curb greenhouse gasses, save energy and utilize renewable energy sources,” said Harvey. 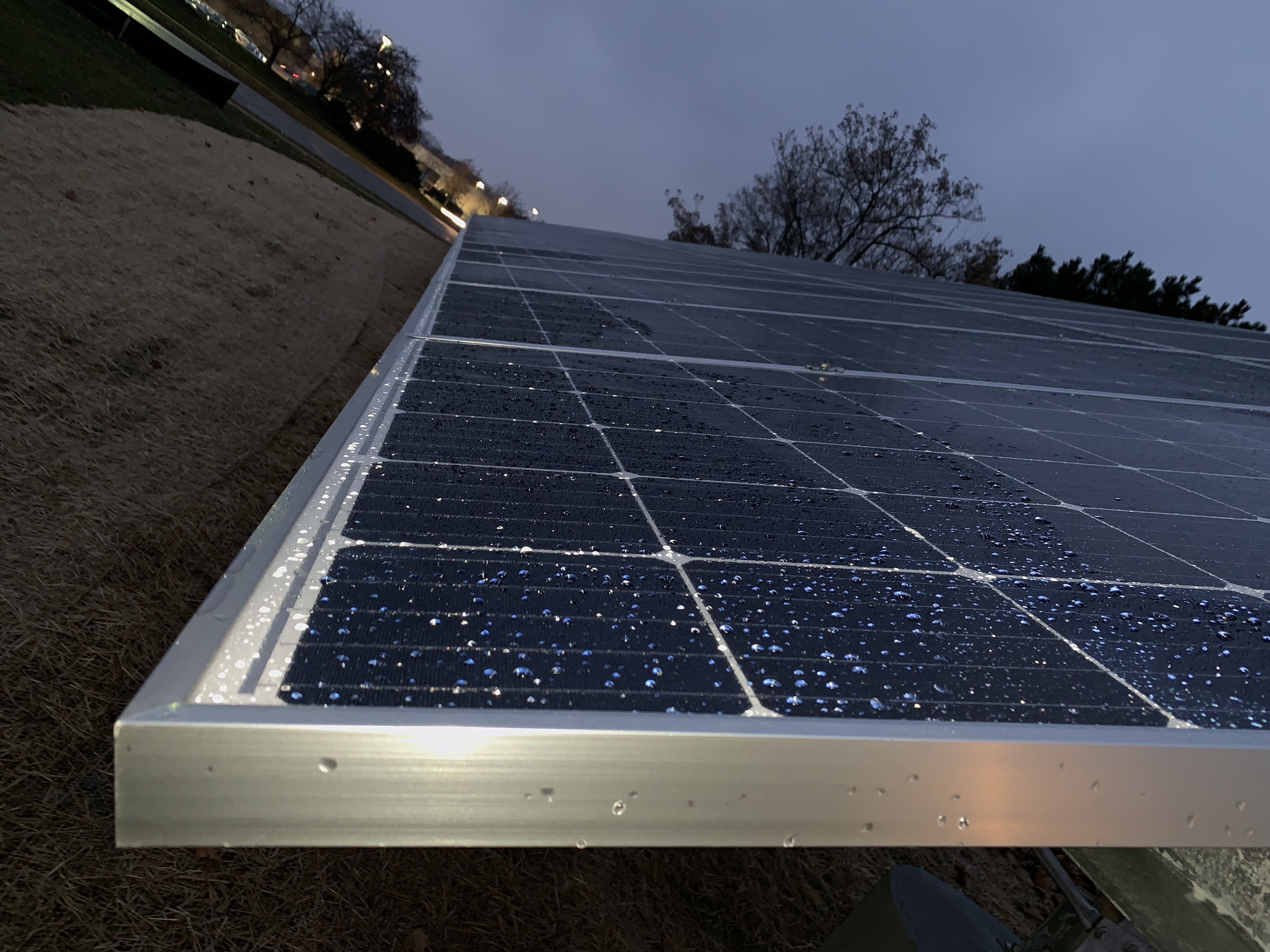 Close-up side view of the solar panel array 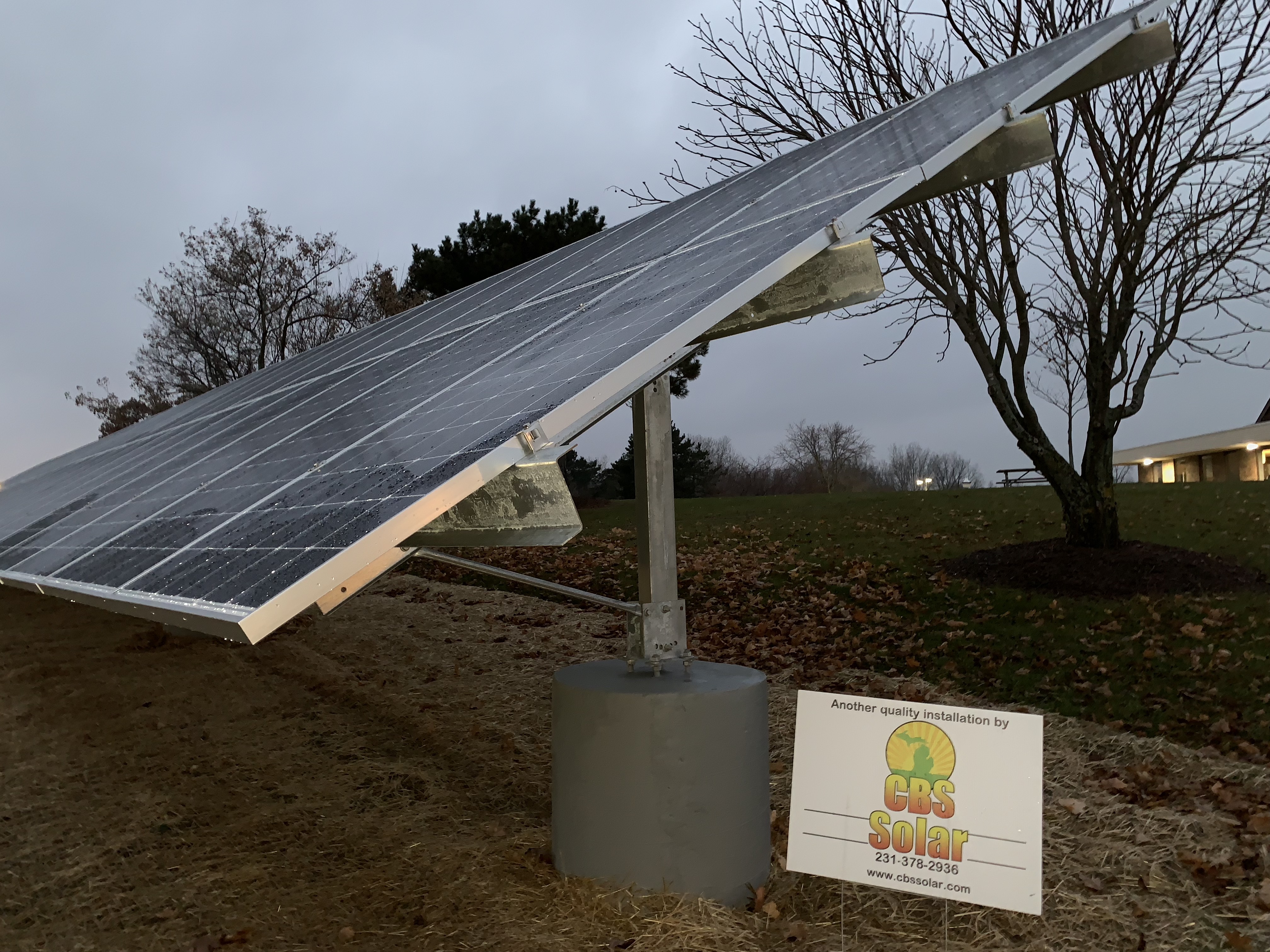