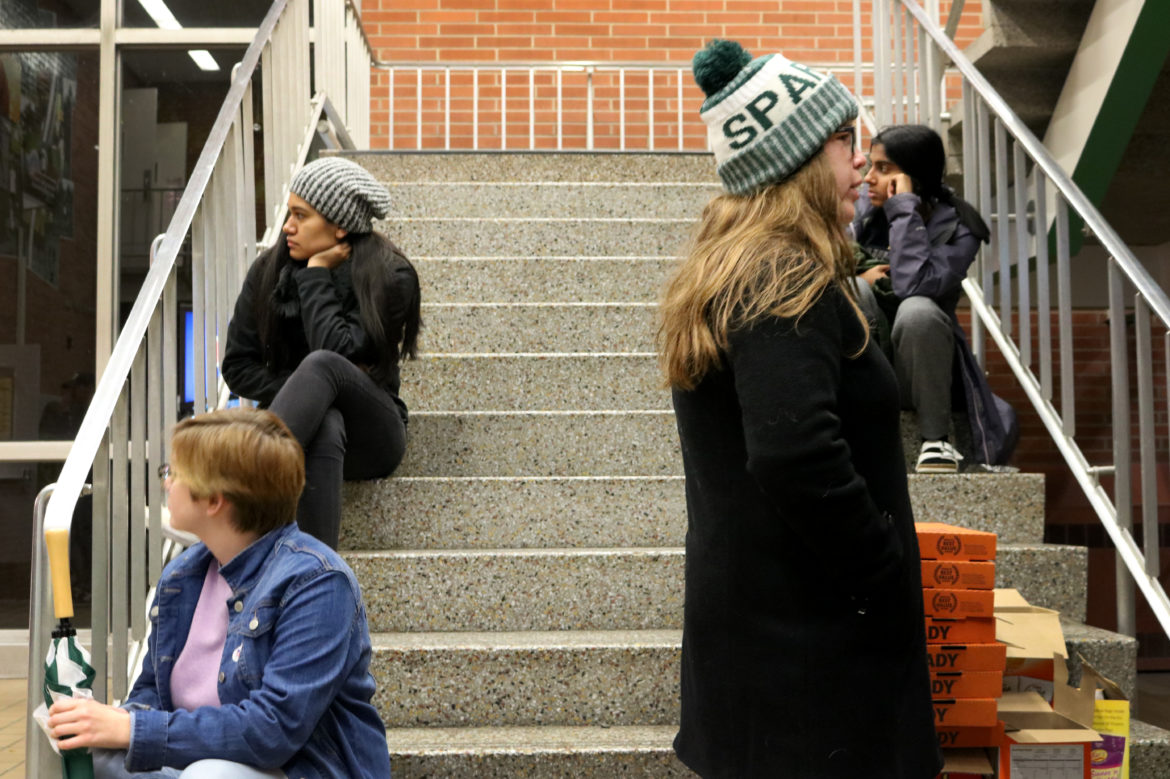 Volunteers wait outside of MSU's IM West to hand out pizza to voters on Election Day 2018. Photo by Colin McKinney

In a trend seen across the country on many college campuses, many Michigan State University students said they felt it was imperative to head to the polls and vote. Many said it was their first time voting in an election.

“I chose to vote because we are lucky enough to be in this country where we have the freedom to vote and I know there are a lot of people that don’t have this right,” said Celia Oatis, a junior finance major. “It’s just very important and every vote counts.”

Junior Sabrina Brogniart, who is dual major in comparative cultures and politics, said she will always vote.

“I think it is a privilege and a right,” Brogniart said. “I wanted to exercise that right today.”

During the day and night, Spartan Newsroom journalists from the JRN 200 and JRN 402 classes interviewed 314 students and staff members were interviewed across campus Tuesday. Of that group, all but 62 individuals had voted or planned to vote.

Daniel Murray, an 18-year-old resident of Traverse City, said he had always wanted to vote at the first possible opportunity.

“It’s important to vote because that’s what you’re supposed to do,” said the international relations major who cast his first-ever vote Tuesday. “I’ve been waiting for years to do this.”

Junior communications major Elijah Wakefield was one of a few students who felt voting is a waste of time.

“I don’t vote. I never have and I don’t think I will,” Wakefield said. “I have a business so it is better if I just stay out of it. I have never seen the people do anything and so my vote won’t change anything.”

Others, like 20-year-old Katt Sabelhaus of Troy, vehemently disagreed.

“Hell, yeah, I voted,” said Sabelhaus, who is a business major. “Voting makes me feel like I am bettering the world. People always talk about wanting to make a difference but this is how you can.”

Rachel Dauer, a sophomore communications major, said she also voted and believes everybody should.

“Voting makes young people feel empowered and gives us a voice, especially when the people in power don’t let us have one,” Dauer said. “That’s what we need to change and that’s why I voted.”

Many students agreed with Dauer saying having the opportunity to vote gave them a voice at a time, when they have felt they have no voice.

“I wanted to make a difference in the world, and one person can do that,” said Iris Oyteti, a 18-year-old neuroscience major. “Plus, it’s my civic duty to vote.”

“Voting made me feel like I was helping the country and the state,” agreed Mia Swanton, 22, a fifth-year media and information student. “It helped me feel good about myself.”

Others said the only reason why they voted was because of peer pressure.

Jack Kwierzchowski, a business preference major said he had not voted but planned to later in the day. When asked why, Zwierzchowski said, “because Kesha told me to on Twitter.”

Others said they would have voted if they had been able to figure it out.

“I honestly didn’t think I registered correctly online which I heard that seems to be a common issue,” said Sarah Coburn, an 18-year-old business preference major. “I will register eventually because I want to vote.”

Some students said they felt guilty for not following through.

For those who did place their votes, many students said they felt it was their duty because America is a democracy and citizens have the right to vote.

“It is really important,” said Kate Miller, a junior international relations major. “Other countries don’t get to cast their votes and we have the right to do so. So we should.”

Mohammed Mussandei, an 18-year-old accounting major from Grand Rapids, said he had waited a lifetime to vote after casting his first ballot Tuesday.

“I believe in the right to vote. It’s a hard fought right that the people of my demographic have fought for,” Mussandei said.

Nicole Herring, a 19-year-old sophomore kinesiology major, had not voted yet but was passionate when asked if she would.

“Voting matters,” Herring said. “My ancestors died for voting. I’m obligated to do it. We all are.”

Students from JRN 200 and JRN 402 contributed to this report.