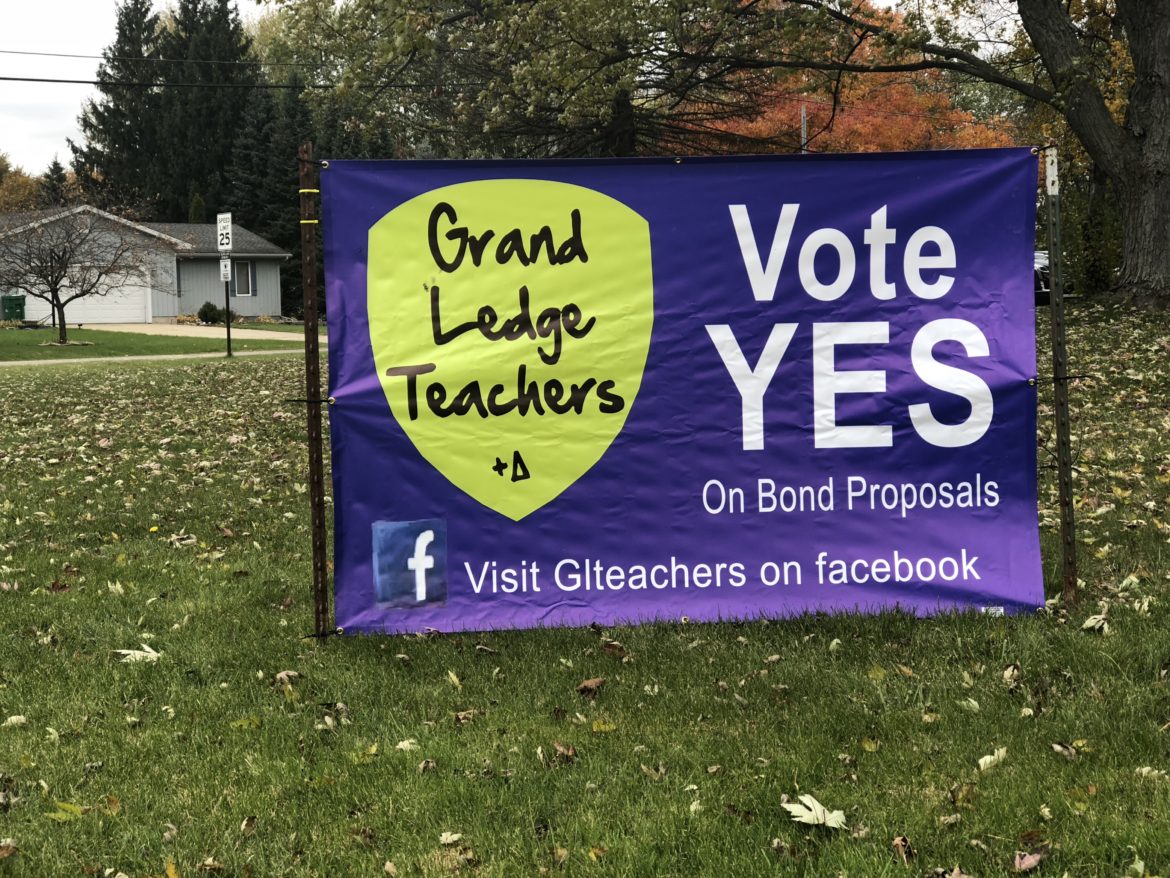 Advocates for two bond proposals in Grand Ledge have placed banners around the district.

Voters in Grand Ledge Public Schools are deciding today whether to raise taxes to provide $148 million to improve school facilities.

The first proposal, which would cost over $118 million, is aimed at restructuring grade levels within buildings and improving the safety and appearance of schools. One of the main fixes would be to have better security for school entrances, Grand Ledge Superintendent Brian Metcalf said.

“We’ve been very fortunate not to have any major issues and we’d like to keep it that way,” Metcalf said. “If there is a major issue we would like to make sure it is as contained as possible.” Grand Ledge Superintendent Brian Metcalf said part of a proposed bond proposal in the district would be used to improve building security. “We’ve been very fortunate not to have any major issues and we’d like to keep it that way,” he said.

Grand Ledge resident Kali Stevens, who is married to a Grand Ledge teacher, has a growing family that will soon become a part of the school district. Stevens said she favors both proposals.

“Education is the single best thing we can do as a community to improve society and the lives of individuals,” Stevens said. “In life, things wear out and need to be updated – cars, homes, roofs and carpets. Schools are no different. They need to be updated, upgraded and replaced.”

The other improvements that are proposed include restructuring the district to have separate buildings for different grades, such as for grades K-4, 5-6, 7-8 and 9-12, as well as a science, technology, engineering, agricultural and math center for students.

Stevens helps manage a Facebook group called Friends of Grand Ledge Public Schools, where she has been advocating for the proposals. She wants her future students to be grouped based on their development levels.

“Parents will occasionally post bullying concerns on the community Facebook page and this is a step in the right direction in helping to reduce those bullying concerns,” Stevens said. “I was bullied as a student and will support any measure necessary to ensure this avoidable experience affects as few students as possible.” Poster discuss how the Grand Ledge Public Schools would spend the proceeds from two bond issues. If approved by voters, they would raise $148 million for improvements in the district.

“It’s been quite a few years since it’s been completely redone and we have acres of parking lot,” Superintendent Metcalf said. “We have about 5,300 students and we have buses that cover about 120 square miles every day, so there are a lot of issues there.”

Patrick McKennon, secretary of the Grand Ledge school board and treasurer of the Safe Schools, Strong Community Committee, said classes should not be impacted by any construction if the proposals are approved.

“The reason we are able to ask for all of these improvements is because we are financing these proposals in three phases,” McKennon said. “Each phase we estimate to take between one and two years.”

Dana Kolker is an aspiring investigative journalist. While interning at WOOD TV, she was able to go undercover for a published story and had other aired content spread throughout West Michigan. She hopes to bring light to issues that have gone unnoticed and give the voiceless a voice.