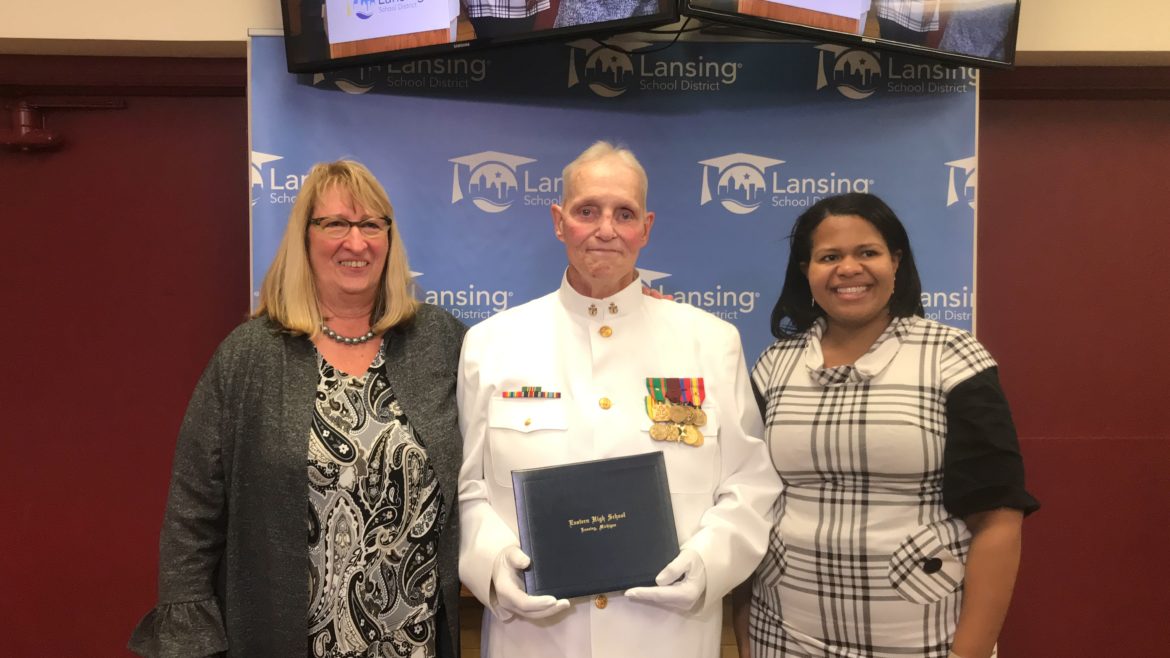 Forty-eight years after leaving high school to enlist in the Navy, retired Chief Petty Officer Dann Huisken received his high school diploma from the Lansing School District Board of Education on Thursday.

Huisken enlisted in the Navy in 1970 when he was a senior at Eastern High School. He said he needed to have more structure in his life, and enlisting gave him the opportunity to get away from what he knew and go on a new journey.

“I’ve wanted to get my diploma for years. It’s always been in the back of my mind,” Huisken said. “I just happened to see an article about a gentleman from Texas who had applied for a program to get his high school diploma, and I decided to look into it.”

According to Michigan law, honorably discharged World War II, Korean or Vietnam era veterans can be awarded their high school diplomas if they enlisted or were drafted into the armed forces and were unable to complete high school.

“When Chief Huisken filled out an application, we were just overjoyed to be able to accommodate him,” Deputy Superintendent Mark Coscarella said. “It is wonderful to honor our veterans and folks who have served our country with grace, honor and dignity, like Chief Huisken. We’re an educational institution, and this is what we’re all about.”

The Lansing school board meeting was full of smiles when Huisken was handed his official diploma. At the meeting, the newly official high school graduate spoke about his time in the service and how receiving his diploma meant a great deal to him and his family.

“This is a very big moment for Dann because it’s a foundation that he was missing,” Jill Huisken, the veteran’s wife, said. “It is very special to me and our kids. They were very excited for him, and they didn’t think he would get through it without crying.”

Superintendent Caamal Canul,said she was happy to graduate another Quaker.

“I think Huisken will be a role model for other veterans who want to come back and get their diploma,” district spokesman Robert Kolt said. “I think we will get more of these requests in the future, and we would actually like to integrate some of the veteran graduates into high school graduation ceremonies.”