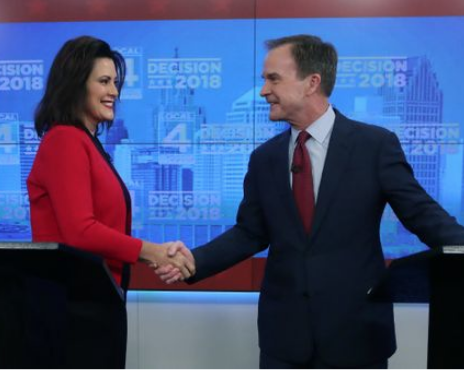 The Michigan midterm election will be taking place Nov. 6, and many Michigan State students have different thoughts on how it might turn out.

Michigan gubernatorial candidates Democratic Sen. Gretchen Whitmer and Republican Attorney General Bill Schuette had a live televised debate in Detroit on Oct. 24. Students around campus gathered to watch it, and some said they were shocked by some of the comments.

“This debate has been crazy from the start,” said Carter Oselett, MSU College Democrats event coordinator. “Throughout this entire race, Bill Schuette has been calling Gretchen Whitmer ‘Jennifer Granholm,’ the name of Michigan’s former governor. “Jennifer Granholm is pretty unpopular with Michiganders right now. So it’s supposed to be a negative thing that he’s comparing her to Jennifer Granholm.”

Oselett said there was also a moment on the main stage where Schuette called Whitmer “Jennifer Whitmer.” Oselett said he was not sure if it was a mistake or if it was on purpose, but said it was very patronizing.

Ben Wright, MSU College Republicans events coordinator, said Schuette is surging in the polls and that voters are finding out how extreme and bad Whitmer would be for Michigan.

Wright said, “Michigan is out of the lost decade and voters don’t want to see a rerun of that with Granholm 2.0 in the governor’s mansion.”

Voters will decide three ballot proposals on Nov. 6 as well.

Proposal 1 will decide whether the state should legalize and regulate recreational marijuana like alcohol, using a 10 percent tax on it to for Michigan’s crumbling infrastructure and public education.

“I think marijuana, for every reason a college student would believe, should be recreational. Other than the sole purpose of using recreational pot, I think it will also attract businesses. It will be such a big market for new small businesses to get started. I think there’s an economic argument behind that, too. It will create revenue, it will create taxation, and that tax money we are paying for will go back to pay for better schools, better roads, and our tuition. There will be great benefits from all of the revenue we have coming in from legal marijuana.”

Proposal 2 would change the way Michigan draws voting districts, creating a commission of 13 registered voters selected by the Secretary of State to draw the lines, four each from each major political party, and five unaffiliated.

Wright said, “I am 100 percent opposed to Proposal 2. I think it will only lead to more partisan gerrymandering and is overly complicated. The current system is not perfect. No system will ever be. But the people’s representatives are deciding the maps and we can hold them accountable and put new leadership in if we so choose.”

Proposal 3, Promote the Vote, would allow for automatic voter registration when one obtains a state-issued license, same-day registration, no-reason absentee voting, and straight-ticket voting for candidates of one political party.

Jack Wheatley, a member of the James Madison student senate, said, “It’s no question these midterms are critical, and though every election has been called “the most important election of our lifetime,” this one really is. It’s not just about who becomes our next governor or the right to roll up, it’s about who we are as Michiganders, and if we will continue to allow our most basic rights as American citizens to be threatened. We are a part of a nation that builds walls or bridges or champions fear over hope, and will we stand up for democracy or let it die in darkness?”