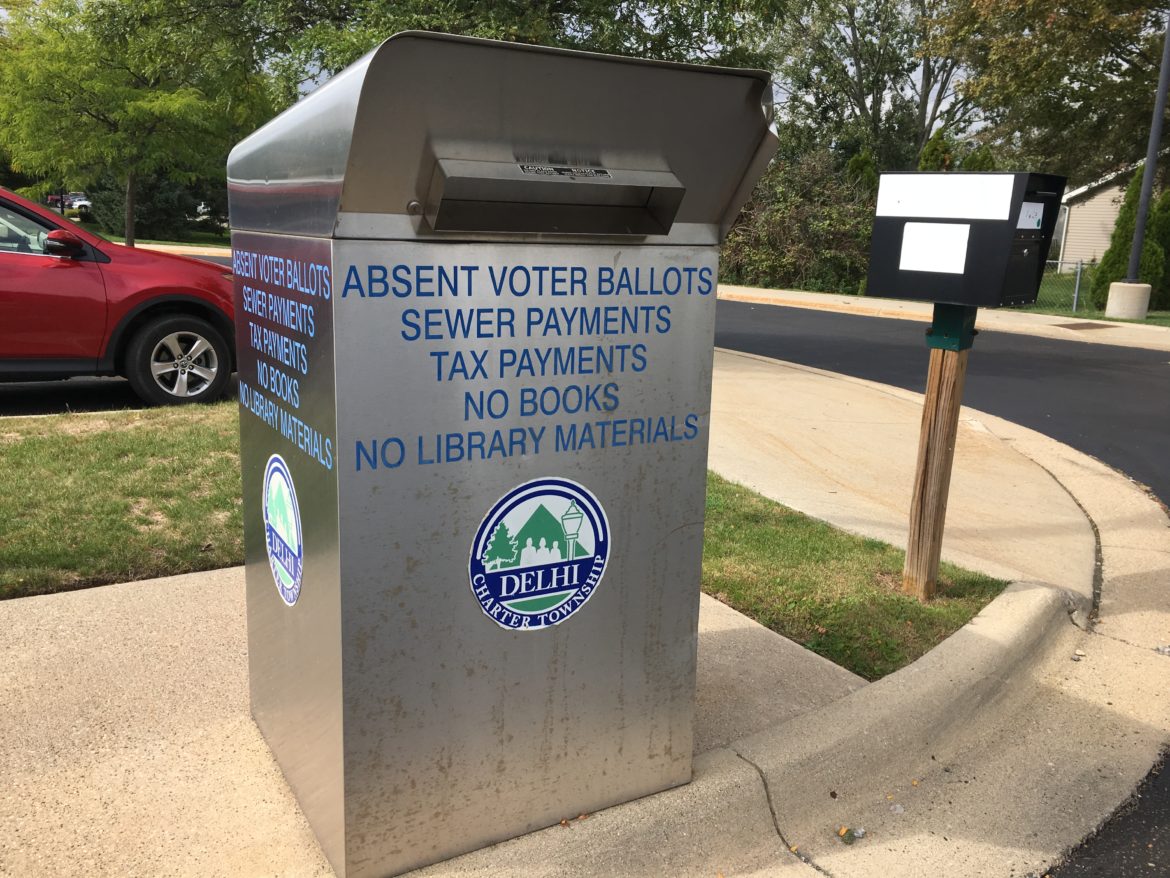 Voters can turn in their absentee ballots outside of the CADL- Holt-Delhi Library or mail in their ballots until Election Day on Nov. 6.

Local clerks are seeing increased activity in their offices as the November election nears.

City and township offices have been running voter registration programs as well as preparing to administer the election, in which voters will select Michigan’s next governor as well as a number of other state and local races.

“We kind of do the same thing for every election,” Delhi Township Clerk Evan Hope said. “We don’t really treat any election differently. We’re about getting more turnout no matter what. We always put things out on the township website along with our social media pages.”

Lansing City Clerk Chris Swope said his office went to the community college as one of its severL spots to help residents learn about voting.

“We have gone to probably 30 or 40 different events and set up tables,” Swope said. “We also go to Lansing Community College and worked with other groups who are out to help provide information on voter registration. We try to go to every place we can be.”

In East Lansing, this gave City Clerk Jennifer Shuster a chance to help students at Michigan State University get registered. She helped students who are from out-of-state to get involved as well.

She works with MSUVote, which helps students on campus learn more about upcoming elections and get information on candidates.

“I am an active member with that,” Shuster said. “I also work with ASMSU (MSU’s undergraduate student government) not only on voter registration efforts but with voter education. I’ve been working closely with them. We have held several voter registration drives over the summer.”

During the 2016 presidential election, 133,355 people voted in Ingham County, according to Michigan Secretary of State records.

Hope said that this year more people came to register compared to previous non-presidential primaries. He said he’s seeing more people mailing absentee ballots rather than bringing them directly to the township hall.

“It’s much higher compared to other elections besides the presidential election,” Hope said. “A lot of people are mailing theirs in. You have to send your form in. From activity, we’re busier than normal with voter registration.”

Swope said the city had about 81,825 registered voters as of Oct. 8, which is lower than its overall average in recent years.

“We have had quite of a few registrations come in, but our overall numbers are actually down from where they were two or four years ago,” Swope said. “I think a lot of that comes from people moving in and out. Our numbers are fairly stable.”

As for East Lansing, this year has brought in some of their highest numbers yet.

During Michigan State’s orientation program for incoming students, Shuster and her team helped register over 3,000 people over the summer.

Kara Keating is a junior studying journalism with a focus in sports at Michigan State University. In the past, Keating has previous work for the Chicago Bandits, 22nd Century Media, and The State News as well as volunteer work for USA Hockey.