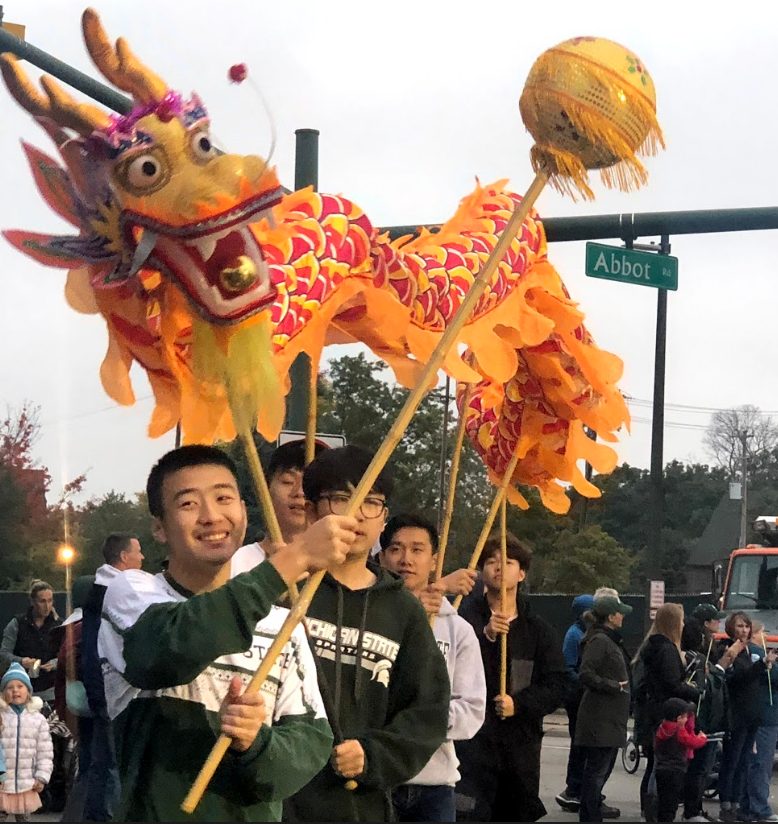 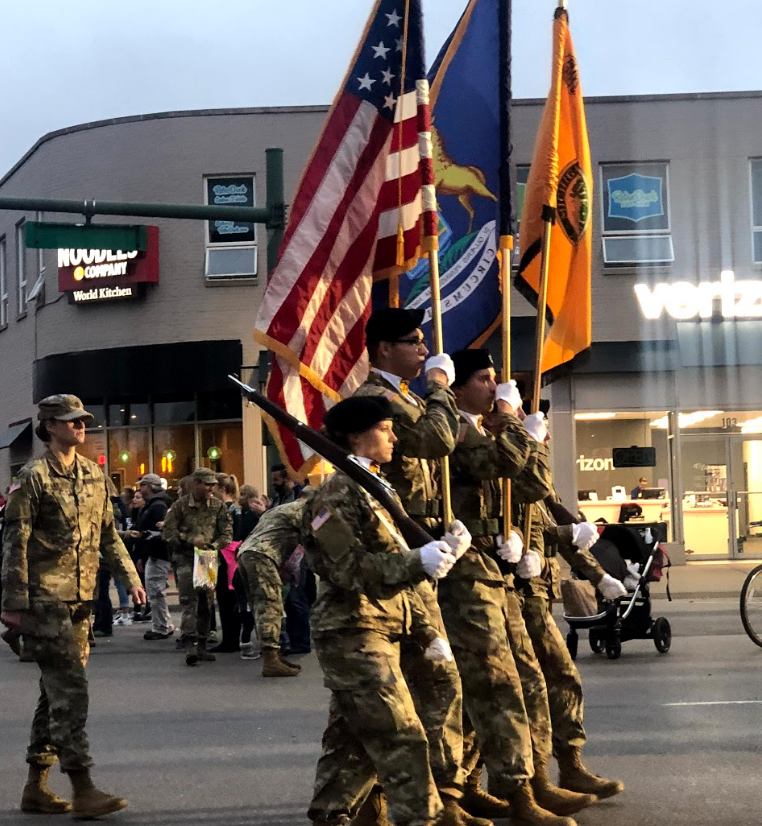 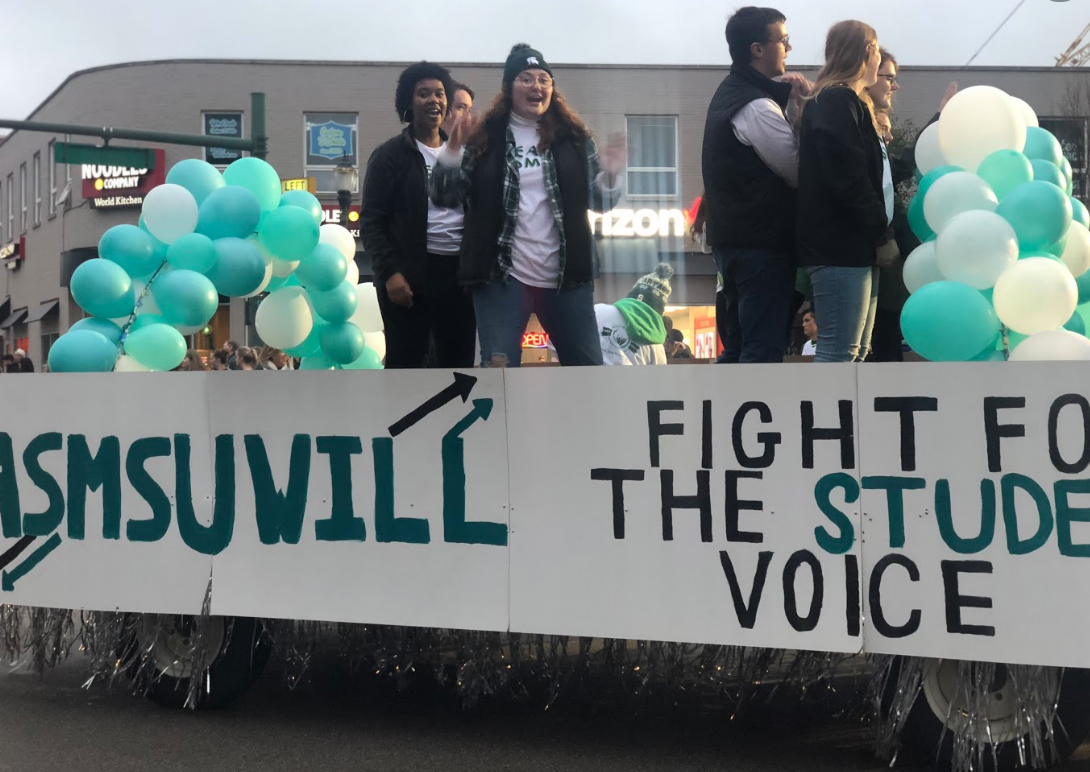 ASMSU members show their homecoming spirit from a flatbed float. The student government float was one of several that advocated for student voices, courage and empowerment. Photo by Justine Baker 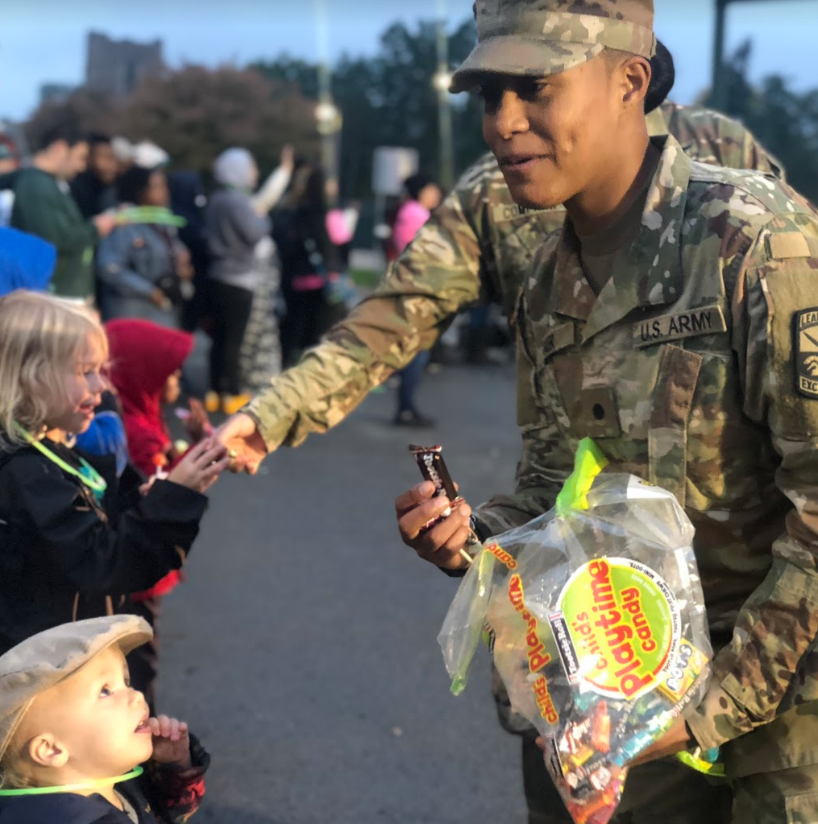 Marchers including these representing the U.S. Army, treated children along the parade route to candy and other treats. Photo by Justine Baker

The Elite dancers were among several dance groups that entertained the crowds Friday. Photo by Justine Baker 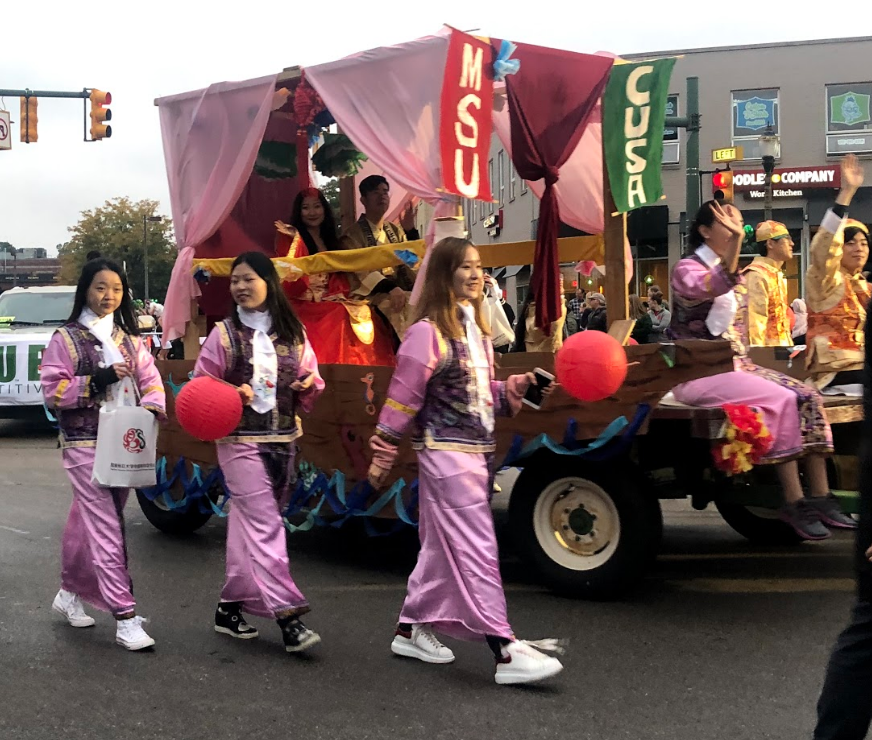 The Chinese Undergraduate Students Association brought an international flavor to the streets of East Lansing. Photo by Justine Baker

Some of East Lansing’s staple businesses are preparing for a busy, yet exciting MSU homecoming weekend. Harper’s Restaurant and Pub, P.T. O’Malley’s, the Kellogg Conference Center and Hotel, Harrison Roadhouse, and the Landshark bar are just a few of the places getting ready for the highly anticipated Spartan fans.

“We really enjoy this time of year. A lot of alum come back, and we do have a lot of events. The business is such a normal thing for us, and we welcome it,” said Kellogg Hotel General Manager Rebecca Selesky. “We get all of our staff up and trained, and just get ready to take on the weekend. We do have a lot of student staff here to help, as well.”

Selesky said the Kellogg center has 160 rooms. The rooms open a year out and are usually sold out by the end of that day. With the large crowd at the Kellogg and in town, police have to take extra precautions to make sure visitors and locals are safe.

“For large events, it is not uncommon for all East Lansing police officers to be on duty during a given time frame. During large-scale events, we will request assistance from neighboring agencies,” said East Lansing Chief Deputy Steve Gonzalez. “Lansing Police, Michigan State Police, and the Ingham County Sheriff’s Office will send specific resources to assist us.”

Along with the festivities comes an increased consumption of alcohol. East Lansing night spots were stocking up on fan favorites such as Landshark’s infamous shark bowls and Harper’s burgers and fries.

“We have a lot of deals going on and expect a lot of traffic to come in, so we ordered two times as much alcohol,” said Landshark General Manager Ron Ferguson. “Bartenders usually spend an hour or hour and a half after closing time to finish out the night and get it looking good to open up the next day.” “Th next day” brings homecoming’s centerpiece: the football game.

“Saturday is a noon game, so we’ll probably open up around 10 and let some people come in and pre-game before they go tailgate,” said Ferguson. “A lot of the alum come back because they used to come here back in the day.”

According to East Lansing Police Sgt. Kristine Khoury, MSU football games typically bring in an extra 30,000 people other than students … there’s not nearly enough parking. One restaurant has a special deal to ensure that people don’t have to worry about parking.

Harrison Gardner, an assistant manager and pub manager at Harrison Roadhouse, said that every year the restaurant has homecoming weekend “parking bucks.” When you pull up to Harrison Roadhouse, you buy a $20 voucher to park. If you go inside to eat, you can use that voucher and it will go toward the bill. With “parking bucks,” customers don’t have to worry about finding a place to park and can enjoy a meal.

From business owners, graduates, bartenders, hotel staff and fans, it takes many people to create a successful homecoming tradition.

Justine Baker is a senior Journalism and Spanish double major at Michigan State University. With experience in broadcast radio, graphic design and public relations, she intends to pursue a career in corporate communications.