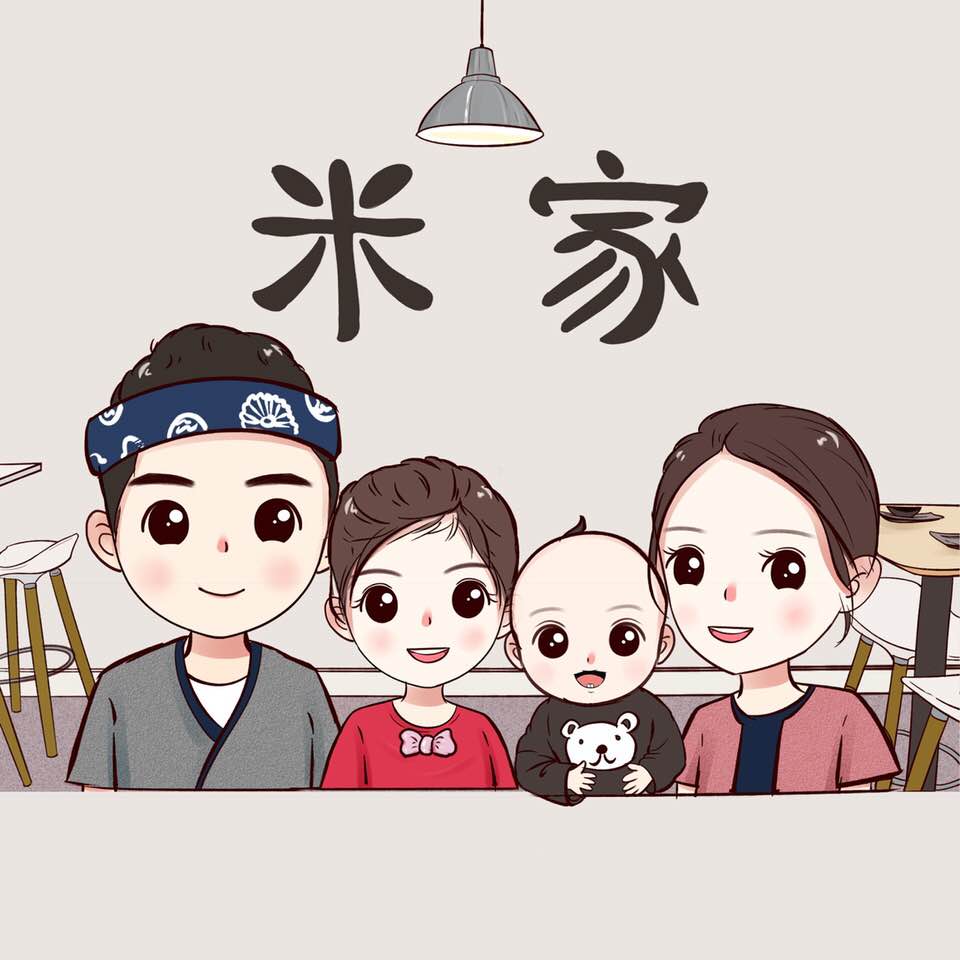 Liang's family cartoon photo made by their friend named "Bai Yang". (From the left, Eddy Liang, Maggie Liang. From the right, Shanshan Xu, Liang's spouse) The little boy next to Xu, Roger Liang, Liang's son who "came" before the restaurant was open.

The abbreviation MI commonly represents Michigan, but a family in East Lansing gave the symbol another meaning as Mi Sushi & Noodles restaurant was born.

Liang used to work in Jackson, which was an hour away from his East Lansing home. During snowy days, he said his family would get worried.

“If we open a small restaurant near our house,” he said, “I can take care of the family right away.”

Thus, he got the idea to open Mi and to make it close by.

In Chinese, “mi” means “rice,” and sushi is made of rice.

Liang has worked in the Japanese cuisine industry for more than 10 years. This time, however, instead of just being the store owner, he is also the chef and serves in the sushi bar. Eddy Liang is working at the sushi bar in Mi.

“There are more responsibilities and stressed as an owner,” he said. “And I have to take care of more things like inventory, kitchen, checks, customer service, employees. It’s all about management.”

Eddy Liang said he did a lot of research before he started the business.

“I went to Las Vegas and Texas to try different sushi to create my own menu,” he said.

Mitchell Pilton became Mi’s customer since its grand opening Nov. 17. He lives near Mi and usually orders sushi and beef or chicken teriyaki.

“The flavor tastes good,” he said. “I like to try different cuisines, and this is the cuisine that I like.”

The restaurant also has a helper in the form of Maggie Liang, the owner’s daughter.

Mi has a Chinese name that reads as “Mi Jia,” which is pronounced like Maggie Liang’s Chinese name — “Meijia.”

“Here is another connection we think is interesting between the restaurant’s name and what we offer,” said Shanshan Xu, Liang’s spouse.

Pilton dropped in the store Aug. 9 for carrying out. He asked for Maggie Liang after he ordered.

“And she started to talking to me,” he said, laughing. “She is cool; she is really cute.”

“And the owners are nice too, that makes you want to come back,” Pilton said. Mi’s Chinese name was made as a decoration on the wall.

Xu is good at making noodles such as ramen and udon. Everything in the ramen except the noodles itself is homemade.

Guilin is located in the northeastern of Guangxi, a city of China known for its scenic hills and rivers. Guilin rice noodle is a classic snack of Guangxi, where Xu is from. She decided to bring her hometown’s taste to the restaurant.

“The rice noodle and meat are chewy,” said Hao Fu, a Chinese international student who graduated from MSU this spring.

Fu had his first visit at Mi July 20 and said the Guilin rice noodle tastes delicious.

“The sesame oil at the bottom of the soup is very fragrant,” he said.

After Xu signed the contract for Mi’s location, she surprisingly found out she was pregnant, and a consideration came up: Did they want to put off the business?

“Because if we want both of us to promote the store on site at the same time,” Xu said. “It might be too tired as a pregnant woman.”

Xu planned to cook the noodles and set up the kitchen. However, since she was pregnant, Tamy Liang, Xu’s sister-in-law, decided to take over Xu’s job. Her support helps the business to continue.

Tamy Liang started her own business in China in 2017. She stopped it and came back to East Lansing and plans to resume her business in November.

Xu said the store finally was able to open because the family sticks together.

“I don’t know how many challenges I would face if there is no family support,” she said. Eddy Liang’s collections are exhibited in the store.

The decoration of Mi is modern and exhibits Japanese animation photos and toys.

“Eddy’s favorite animation is Dragon Ball, so we moved some of his collections to the store,” Xu said. “And the pictures on the wall are animations that we both know and like.”

Since the summer vacation, many students go back home. Unlike some restaurants, which decide to close for this period, Mi remained open for the whole summer.

“Summer could be challenging for profit,” Xu said. “But since our major target customer is local residents, it’s actually better than we expected.”

Xu’s goal is to increase word of mouth about Mi’s products. She gave an example of ramen.

“When people think of noodles,” she said, “I want them to think about Mi.”

Chris Buck, who became Meridian Township’s economic development director October 2017, was a small business consultant, said he was at Mi’s ribbon cutting, met the owners and went to the grand opening.

“It’s a fantastic facility,” he said. “Their food is really good, it was fun to hear their stories because they both have a passion for different type of cooking and they put the two together.”

Buck’s job at this position is to try to get good businesses to come to Meridian Township and occupied empty spaces.

“We have a couple of areas that are not as populated as we would like them to be empty buildings,” he said. “So as I talked to the residents of our community and asked them what kinds of businesses would they like to see, almost without exception, the first out of their mouths is they want locally owned food service operations.”

Buck said there is an opinion that most of the options in Meridian Township are chains. For example, Subway, Pizza Hut, McDonald’s.

“They all have a role to play in our community and we are very grateful to have them as businesses,” he said. “But seems like the community wants more of like a Dusty’s Tap Room, a family-run operation. So the interest level of our community to have more and more family-owned restaurants is very high.”

“We were thinking about opening every day,” Eddy Liang said. “But then we found it would be too busy to accompany the children, so we decided to close on Sunday.”