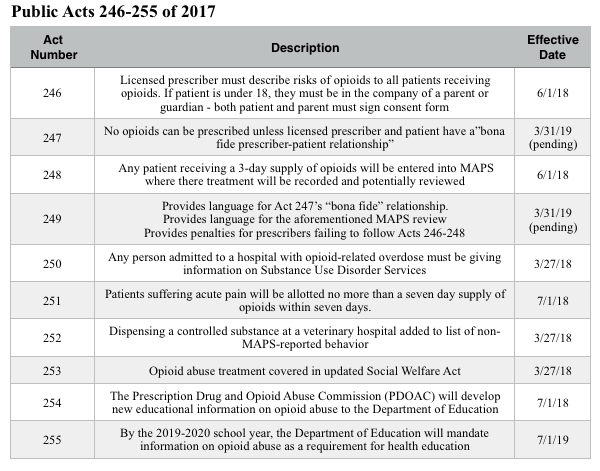 In efforts to slow the spread of the ongoing opioid epidemic, Michigan legislators passed a 10-bill package in December of 2017 containing laws which went into effect on June 1st.

Peters expressed hopefulness about the bill’s attempt to educate patients on the dangers of opioids and provide more information for adolescents.

This 10-bill package lays out new guidelines for doctors on Michigan’s Automated Prescription System (MAPS), and holds them responsible for prescribing smaller doses and explaining all possible side effects.

“This is another tool in the box to help the opioid epidemic,” Rep. Joseph Bellino (R) said. “The MAPS system has been updated and now we’re making doctors use that system – it’s a change of culture.”

The new laws carry bipartisan support in the house, but not everyone is convinced that providing people with more information will be enough to make a difference.

Lansing local and former opioid user, David Williams, 29, spoke freely when asked about the potential impact of the bills.

“Some doctors will be handing out some extra flyers? So what?” Williams said. “You can tell people anything you want about addiction but they’re not going to understand until they go through it themselves. This doesn’t change the problem that an addictive drug is the state’s best option for chronic pain.”

Only time will tell if the new laws will bring the positive change many congressmen and Lansing locals are hoping for.

For more information on the recently launched 10-bill package refer to the infographic above or visit this link.