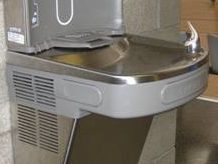 Water from drinking fountains like these could be regularly tested if these bills pass. Water from drinking fountains like these could be regularly tested if these bills pass.

Michigan lawmakers may soon require schools and other facilities to regularly test their water for lead and other harmful contaminants.

The House Natural Resources Committee heard testimony on a series of proposed bills that would require yearly testing at both public and private schools, including colleges and universities, child care centers, hospitals and veteran centers.

House Bills 4120, 4372 and 4378 each focus on specific areas of education. All three bills have sat in the House for over a year, some going back as far as January 31, 2017.  Recently, there has been an increase in the support of the bills from both sides of the aisle.

Committee Chairman Rep. Gary Howell, R-North Branch, voiced his support for the bills, and added that he can’t imagine there will be much resistance.

“Nobody wants to drink unsafe water,” Howell said.  “There are some technical questions we’re going to have to figure out, but I don’t think many will be opposed to it.”

Some of the technical questions that need to be answered include testing logistics and funding. Howell added that staffers for the Department of Environmental Quality will work to merge the bills into one large piece of legislation.

A similar program was set in place in 2016 when Gov. Rick Snyder called for the formation of the Flint Water Quality Advisory Task Force.  In the state’s budget for the following year, $4.3 million was set aside to reimburse schools that found lead in their water systems.  The amount of money supplied was not nearly enough to cover the costs, though.  The program no longer exists. Results of water samples taken from Flint schools in Jan. 2018. Information via Dept. of Environmental Quality.

Justin Green, a current Michigan State student and resident of Flint, knows what it’s like to struggle to find clean drinking water.

“You see all the videos of people getting packs of water bottles off of moving trucks,” he said.  “People need to understand that it’s not like we’re just too good to drink tap water.  If we did drink the tap water, we’d be putting ourselves in danger.”

Lead is a neurotoxin that can cause severe damage to the brain and nervous system development, especially in children.  Due to their growth, children and infants absorb more lead than the average adult. Even if major water supplies met federal and state standards, the water in individual buildings could become contaminated by old, rusty pipes.

According to the EPA, there is no federal law requiring the testing of drinking water in schools and childcare facilities, except for those that have or operate their own system.

Most schools in rural Michigan are required to frequently test their water because it is supplied by wells. Some schools test voluntarily, but many don’t have the funds to afford frequent testing.

“Schools have to deal with contaminated water sources in a better way than just shutting down a drinking fountain,” said Cyndi Roper, a policy advocate for the Natural Resources Defense Council. “We hope we’re not cutting kids off from water access.”