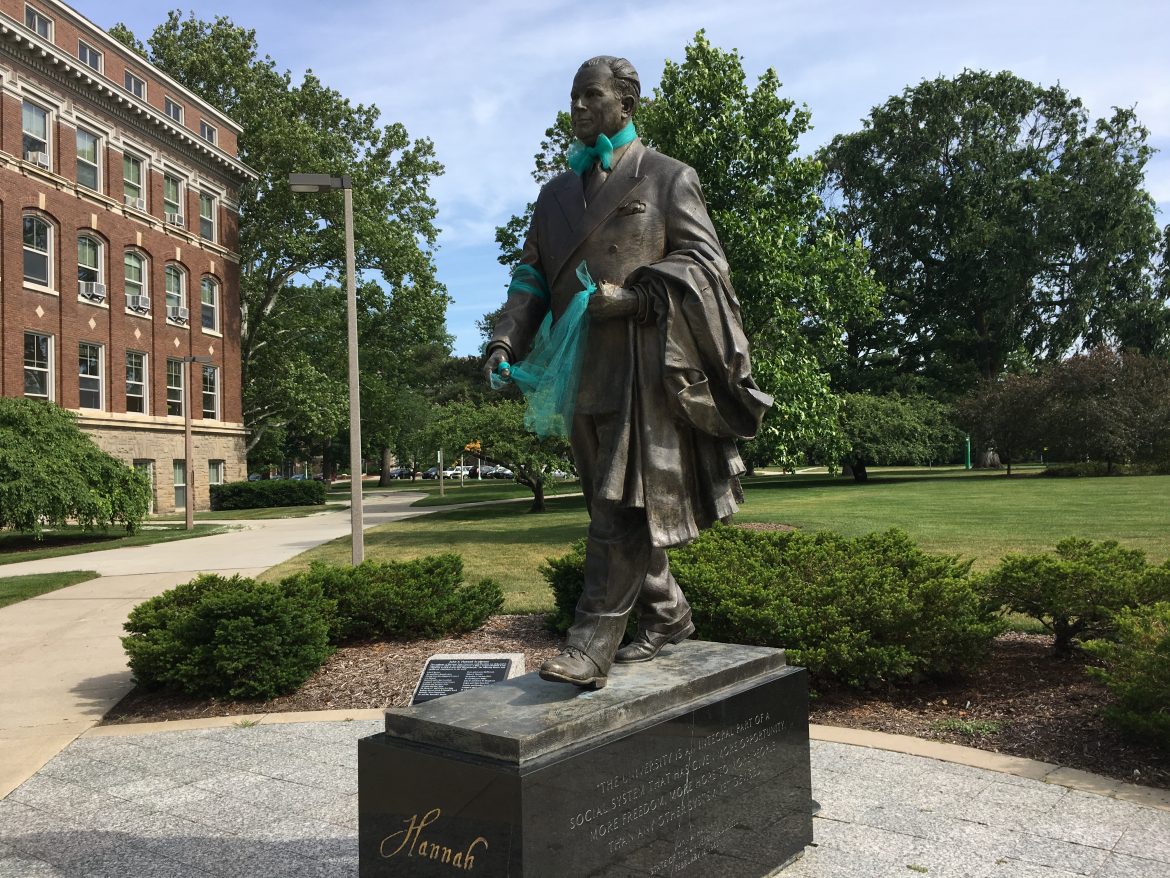 Teal-colored pinwheels have been placed outside the Hannah Administration Building to show support for Nassar survivors. Photo: Colin Donnelly.

Michigan State University hopes to hire a new president to help steer the school away from the Larry Nassar scandal by June 2019.

Trustees Dianne Byrum and Melanie Foster announced on Wednesday that the university hopes to form a 15-member search committee by August to find a new president.  The first applicants will be interviewed by November.

“Our new president must have that intellect that can understand people’s feelings and internalize that and be able to show compassion,” Byrum said.

This comes after criticism of interim president John Engler and several recent comments that he has made concerning the case surrounding former MSU doctor Larry Nassar.  Engler is expected to remain the interim president throughout the search but will have no involvement.

Last week, leaked emails from April showed that Engler speculated that the first woman to speak out against Nassar, Rachel Dehollander, was receiving referral fees or kickbacks.

Just days prior, news broke that Engler walked into a meeting and allegedly told a team planning an event to “Get that teal shit out of here.”

Teal is the color Nassar survivors and supporters wear to show support and solidarity. Casey Copp, a recent Michigan State graduate, was a section leader in the Izzone this past season, and he took Engler’s comments to heart.

“As one of many students who led the teal movement, it was heartbreaking to hear the president of the university try to rip apart everything we worked for,” Copp said.  “With teal all over campus, students gave the board of trustees a softball to hit out of the park for their own reputation. Embrace it.  Acknowledge the mistakes that have been made.  Do the right thing.” For the past several months, teal ribbons and flags have been placed all across campus, most notably outside the Breslin Center, Spartan Stadium and the Hannah Administration Building.

“When the Board of Trustees and President Simon were disgracing the university with how they were handling the whole situation back in January, the other section leaders and I believed we needed to do something to show student solidarity with the survivors,” Copp added.  “In addition to the hugely successful teal-out game, we also raised over $7,500 for the MSU Sexual Assault Crisis Intervention Team and the Firecracker Foundation.”

Can the university wait for another year before hiring its next president, though?  Is Engler the right fit for now?  While some might say that Engler is the best option the university has at this current point in time, Copp disagrees completely.

“Only when we have good leadership who are willing to pay up for the university’s mistakes to the sexual assault survivors, fix the procedures for how sexual assault incidents are handled, and make our campus safe will this university be able to move forward,” Copp said.  “The spotlight is on us, and we have an opportunity to lead by example and be the forerunner for how to be a safe, responsible, and transparent university. It starts with a complete change in leadership.”