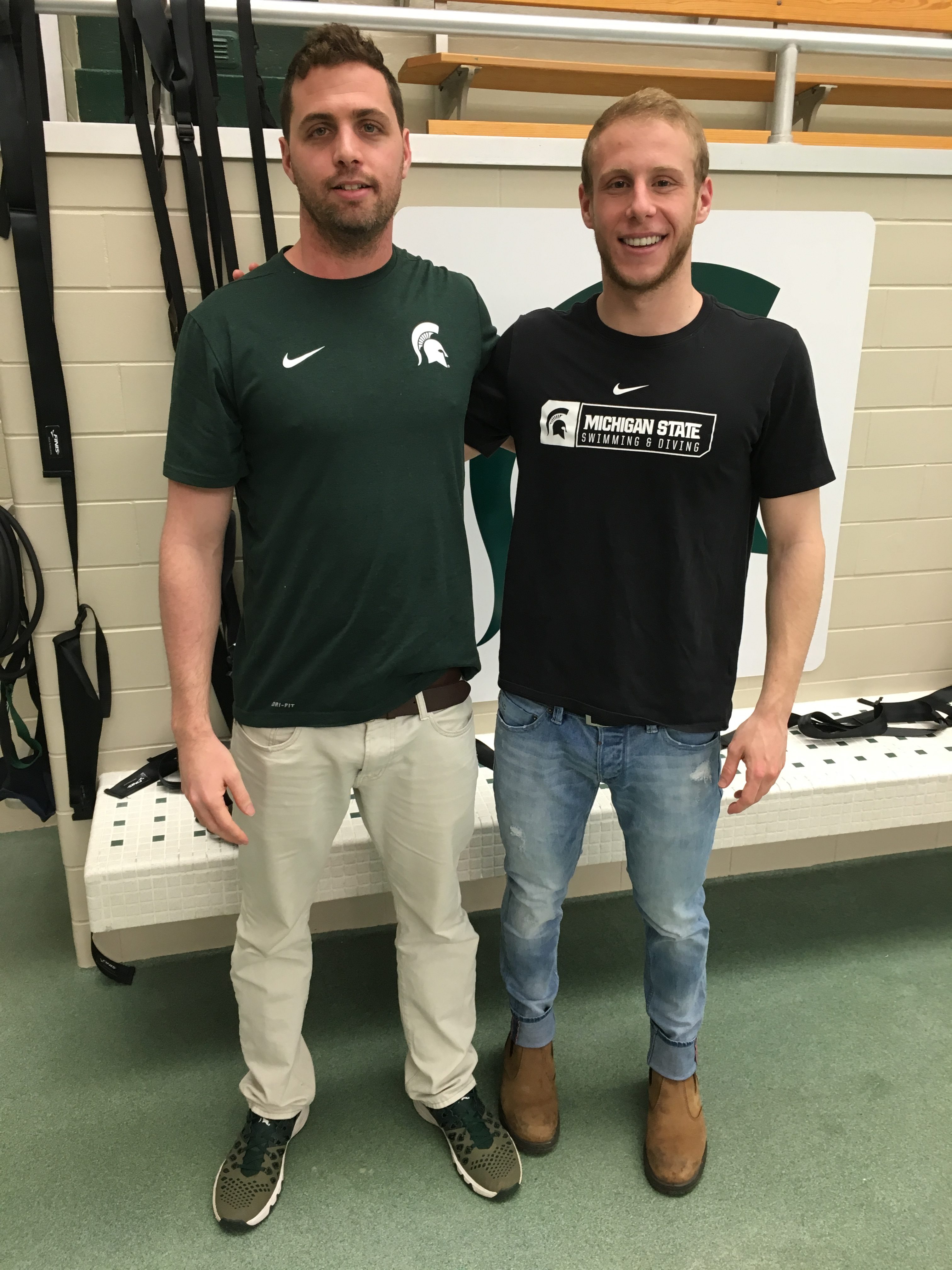 Michigan State University senior Tal Hanini, left, and freshman Guy Moskovich, right, are both natives of Israel and members of the Spartan swimming and diving team. They say it's been an adjustment learning the culture of an American university. 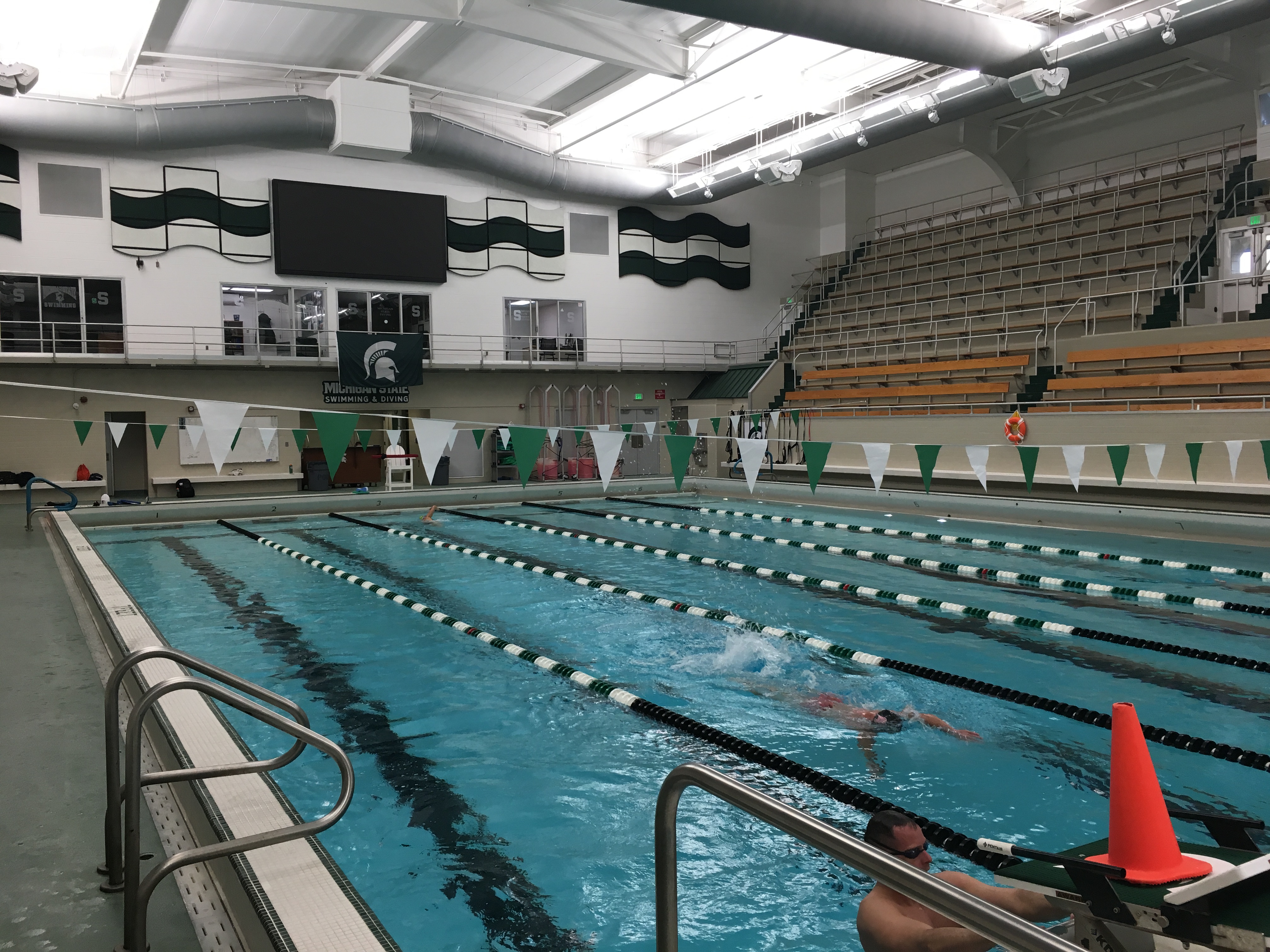 A swimmer does laps in pool inside the MSU swimming and diving facility in IM West on April 4. Head coach Matt Gionnadis said members of his team have helped their Israeli teammates adjust to campus life. "And at a big place like Michigan State, it’s not going to be intimidating place for them to come to,” he said. 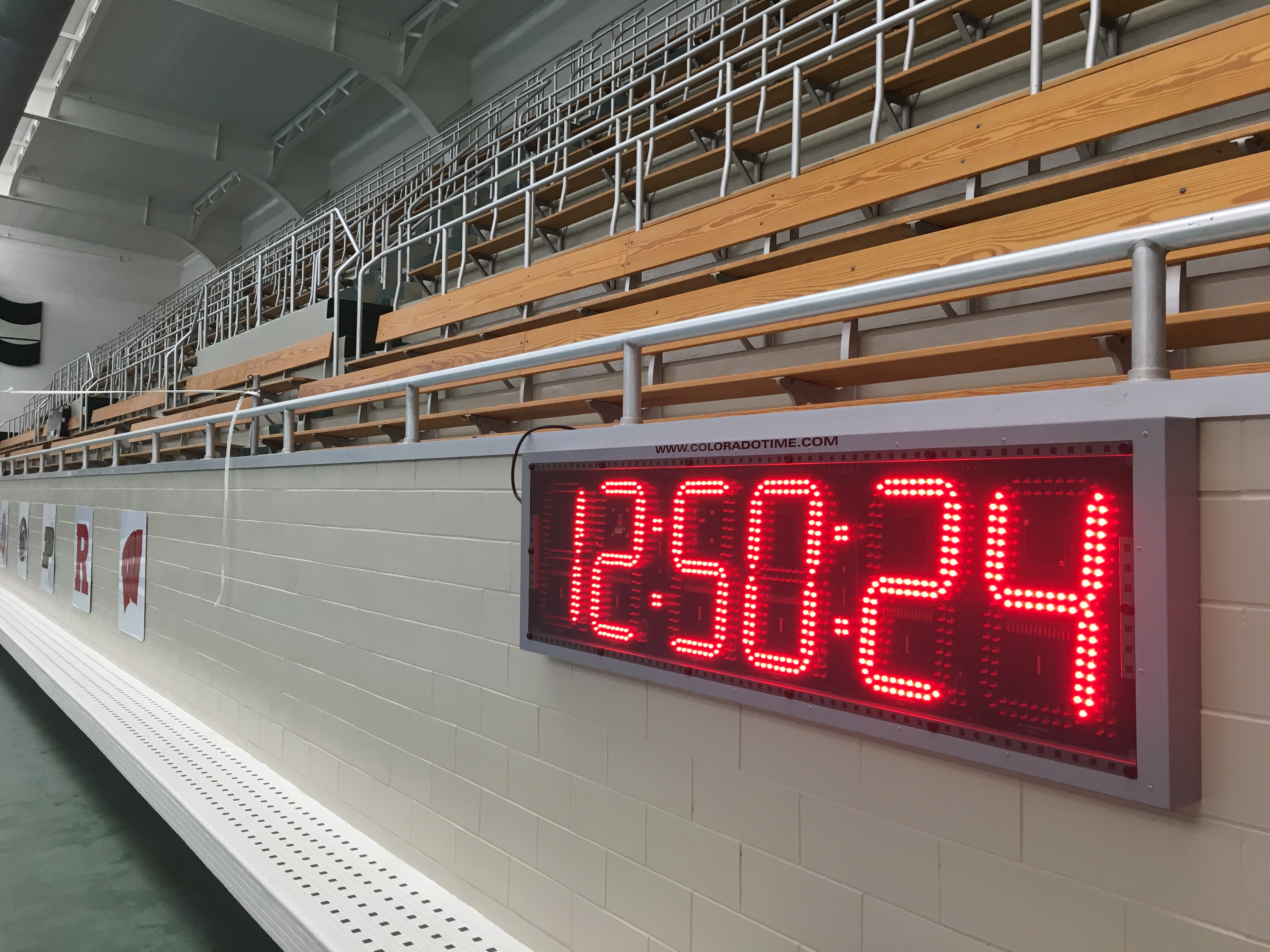 The clock inside the MSU Swimming and Diving facility in IM West on April 4. MSU swimmer Tal Hanini said he and teammate Guy Moskovich knew each other as young swimmers in their home country of Israel.

Tal Hanini knew he was in for a big change the second he stepped outside and saw his first Michigan snowfall. He quickly went back inside and grabbed a couple more layers before braving the elements.

Hanini attempted to walk to his class, but got lost — a common occurrence during his freshman year. Asking for directions? Not as easy as it might seem with broken English, not knowing anybody in a sea of nearly 50,000 students.

Hanini, an Israeli citizen who is now a senior studying engineering at Michigan State University, has worked out most of those problems, and he’s become a resource for another student from Israel, Guy Moskovich, a freshman business major. Both students are members of MSU’s swimming and diving team.

“I had a hard time, especially with the weather and size of the university,” Hanini said. “I never took part in something like that. So I got lost a few times in the first week, of course, I (forgot) words.

“Usually when you go in your hometown or your area, you know somebody who’s already been there. When I came here, I didn’t know anyone. That’s why I’m really happy I’ve had the swimming team, so I could ask the seniors or juniors at the time and they’d tell me, ‘Oh yeah, your class is there,’ or, ‘Your class is here.’ And they’d explain to me how to get places, how to enroll in classes. Things like that.”

Head coach Matt Gionnadis, who is in his 21st season with the program, said the team embraced Tanini, and now Moskovich. It wasn’t the first time the group has rallied around a teammate attempting to adjust to school, and it probably won’t be the last, he said.

“That’s a staple of our team — very inclusive,” Gionnadis said. “I think the thing they probably had to get used to the most was the weather. When Tal was a freshman, he would come in super bundled up. But he’s gotten used to the cold.

“That’s the one thing that’s nice about Michigan State is that it’s a real inclusive environment. We have different cultures, different everything here. And at a big place like Michigan State, it’s not going to be intimidating place for them to come to.”

The two swimmers grew up about 20 minutes away from each in Israel — Hanini is from Beit Lehem Haglilit and Moskovich is from Haifa. Although they didn’t participate on the same club team, they had a bit of contact with each other throughout middle and high school.

“Israel is such a small country, so all the high-level swimmers know each other,” Hanini said. “We still have three years of a gap between each other, and we aren’t competing on the same events. We knew each other’s names, we knew we were good swimmers, but we never had any personal touch before.”

Hanini said his four years in East Lansing have given him a understanding of how American student-athlete life works. But he said he didn’t automatically pass on everything he learned to his younger Israeli teammate.

“I wanted to give him his own experience because I knew how much it helped me to develop myself,” Hanini said of Moskovich. “I help him every time he asks. I try to stay behind, give him his space but whenever he asks for help or any advice, I’ll try and do my best.”

Moskovich said he has thrived in his freshman year on campus, knowing that help would always be there if he needed it.

“It’s great,” Moskovich said. “Tal came here alone, and nobody was here before him from Israel. So the fact that he was here really helped me.”

“It’s really helpful, because I do try to not lean on him too much — just try to figure this out myself. But when I was at a dead end, Tal helped me.”

Gionnadis recruited Hanini and Moskovich to Michigan State, but he said hasn’t had to ask the elder Israeli to give the incoming one help.

“Tal was really good about giving Guy an outline of what our program was like,” Gionnadis said. “He contacted him ahead of time. He’s been a helper, and not just to the Israeli kids. He’s been a mentor to some of the younger kids all across the board.”

Spending extended time in the United States is an opportunity most of Tal and Guy’s friends and family back home can’t say they’ve gotten the chance to do. So whenever they’re able to talk to them, the questions come flowing in.

“Are the parties the same? What are the classes like? Is football like that?” Hanini said with a smirk. “Football is so big. It’s similar, but of course it’s not that exaggerated as movies.”

But Moskovich said most of his friends are in the same position he is in,

Although East Lansing is where they call home for eight to nine months out of the year, neither Moskivich or Hanini said they consider themselves Americanized — at least not yet.

“I assume it’s much different outside the university,” Moskovich said. “I wouldn’t call myself experienced enough in American culture. Maybe it’ll be different my junior (or senior) year when I will live in my own house or apartment.”

Despite being in the U.S. for three more years, Hanini still doesn’t consider himself any more “American” than Moskovich.

“I’ve been here four years, I’m going to do a fifth year also, and I still don’t feel like I’m an American,” Hanini chuckled. “I’m adjusting every year for a new thing, learning new things about Americans. I think it’s a good thing to keep learning.”

Learning is something that Gionnadis has done, too. Recruiting halfway across the world was not the easiest thing to do, but he’s happy he went through with the process.

“I’m just really happy that they came here,” Gionnadis said. “They’ve been great contributors to our program. Tal (works) really hard academically, he’s been able to handle it quite well. I just feel bad that he’s graduating, he was so close to breaking our team record in the 200 (individual medley). But they’ve been great kids, great workers, really happy that they came here.”