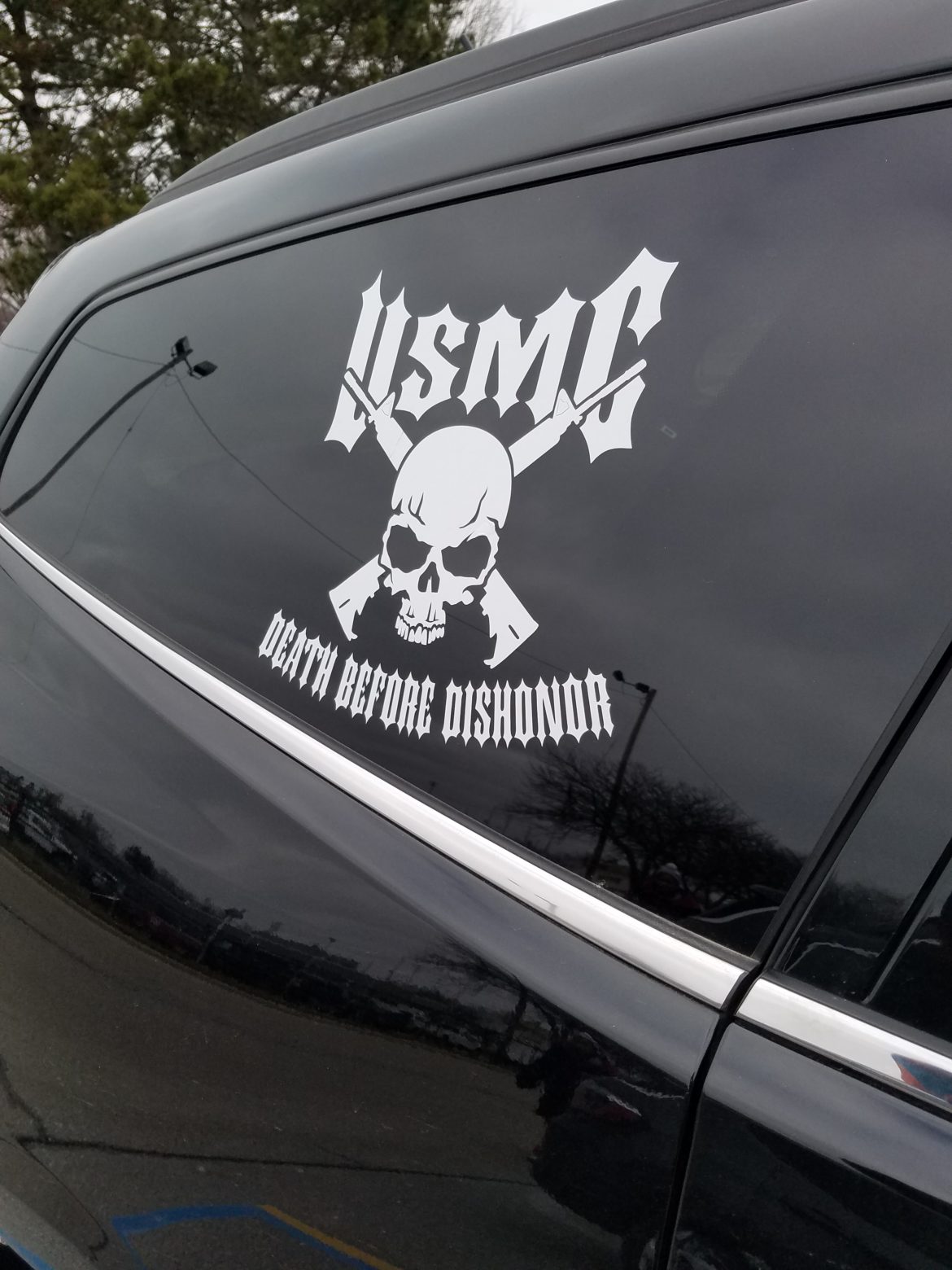 A window sticker displaying the intense pride felt with being a Marine. Similar cultures of pride are seen across the military regardless of branch. Photo by Remington Sawade.

All because your body is no longer in a place of war doesn’t mean your mind is safe at home.

“If you’re in a combat situation or environment for seven months to a year … your brain is going to establish those things as the norm, and when you’re not in those situations anymore your brain is still going to process that you are,” says Logan Stark, a retired Marine Scout Sniper, about adjusting from combat to civilian life.

Stark saw combat in the Middle East during his time in the Marine Corps and dealt with Post-traumatic Stress Disorder, or PTSD, when he returned to the United States. Stark says there are many factors he calls “environmental stimulants” that can affect individuals in many different ways.

For Stark, large crowds presented situations where his brain perceived the circumstances as threatening and it reacted as it would have in a combat environment. “Your whole body tenses up and you start thinking, you start going through scenarios. Your brain basically runs through this process, the same thing it did in when it was in combat,” says Stark.

Director of the Ingham County Veterans Affairs Natrenah Blackstock says that educating veterans and the public is very important for understanding PTSD and removing the stigmas that surround it and other mental illnesses. She says, “we don’t stigmatize someone who has diabetes or someone who has heart trouble, it is the condition that they have; we educate them, they work around it, and continue to operate in society.” The mural decorating the outside of the Ingham County Veterans Affairs office. Photo by Remington Sawade.

There is a high population of veterans suffering from PTSD in Ingham County, said Blackstock, and a step towards education for the likely event that someone meets such a vet is making the public aware PTSD is not only related to combat trauma. She says, “Contrary to popular belief PTSD stems, not only stems from combat veterans, but also from other tragic… or traumatic things that happened while in military service.”

Blackstock says a large number of PTSD cases are from service members who suffered Traumatic Brain Injuries or victims of Military Sexual Trauma. Both of these types of events can happen to veterans who never saw combat.

Veterans Benefits Counselor Amy Pocan says she sees the variety of effects PTSD can have on veterans adjusting to life in the civilian world; things like issues with money, struggling to manage anger, and a feeling of isolation from the people around them.

“When a veteran comes in they will explain some of those things to you; they will say they feel kind of feel alone or they will say that they are dealing with financial stuff, and then sometimes you will just physically see the anger on them,” she says.

Stark says these types of reactions should not be perceived as weakness or brokenness, they are simply side effects of the brain not having time to adapt to a new environment that is relatively threat free compared to the one it was just experiencing. “With the way we deploy now,” says Stark, “you’re in a stressful environment and, you know, a couple of days later you’re not.”

It isn’t a problem that most people will necessarily face constantly for the rest of there lives or even beyond a few years says Stark. He says after being in a sustained state of high stress the brain will, for a time, react as if it were still in that stressful environment.

John Taylor, a veterans benefits counselor, says the stigma surrounding PTSD can affect both veterans and civilians interacting with them. He says some believe that PTSD makes the person “harder to work with” or likely to have issues in the workplace. The stigma attached to psychological trauma can be tough for veterans to face due to pride or fear of judgement as well says Taylor. A window sticker displaying the intense pride felt with being a Marine. Similar cultures of pride are seen across the military regardless of branch. Photo by Remington Sawade.

Society has directly attached PTSD to combat veterans, says Taylor, and they are far from the only group that can suffer from the condition. “If you look up the DSM (Diagnostic and Statistical Manuel of Mental Disorders)… it doesn’t say anything about veterans or anything like that, anyone can suffer from PTSD,” he says.

Taylor says the first hurdle for many vets is recognizing that they may have PTSD and only after they acknowledge that can they start to learn how to deal with it personally.

Stark says it is contingent upon the individual to understand their psychological state. He says, “It all has to be self-induced as far as the analysis of what is going on with yourself, because you get into these… life grooves to where you just have think that this is the new me, but you haven’t started dealing with any of these issues.”

After a veteran has sought help with their PTSD and made progress in coping with the effects of it, there are still things that may aggravate it or remind veterans of traumatic events says Taylor. He says the Fourth of July, specifically the fireworks can affect veterans. “When you know it’s coming (the firework) you can handle it … it is the unexpected ones that kind of throws you” Taylor says.

Stark says it is not even necessary for something to happen to cause a combat survival reaction.

He says, “I was driving down the highway one time and, like, I just got this overwhelming feeling that I was just going to die … nothing happened to me, you know, I was just cruising down the highway, I was alone, there was no reason for that but when your brain fires a certain way those electrical impulses are just left over from a time when you’re like ‘ope, my life is immediately under threat.'”

For many veterans there is a feeling that civilians cannot and never could understand the stresses and experiences they went through and therefore could never understand the way they’re thinking when their brain identifies a threat or activates causing a response that may seem extreme in a civilian world, Pocan says.

Driving, she says, can be a time of great stress for lots of vets because many of them drove while deployed in combat zones and this can lead to road rage as well as other issues.

Pocan says she tells all of the veterans she sees to “get a license plate that says veteran on i t… at least having some form of veterans plate gives the person on the civilian side an option to acknowledge the fact that maybe they should not tailgate them.”

When a veteran has a visible injury such as a missing limb, it is relatively easy to see that they have been through events that may have had lasting effects on their psychological health, says Taylor. “Most veterans that PTSD, it is not something that you can see,” he says.

Because it is very difficult to know what is going on with a veteran, Blackstock says, in her opinion, people should not try to play “subway therapist” with someone they meet wearing a Vietnam Veteran hat or pry about their service. She says, “when you see veterans … speak to them, say ‘Thank you for your service’ and if they are wanting to share something take time to actually listen” but never ask personal questions, particularly about combat experiences.

Stark says the important steps that can help with healing are talking to someone else who has had similar experiences, being vocal to someone about what you are feeling, and being patient with yourself throughout the process.

Stark says regaining a connection between your mind and body is vital to adjust to life outside of constant stress. Finding an activity to rebuild the relationship between the mind and body is up to the individual, but can be “going for a walk, listening to a podcast, doing yoga, reading a book, taking up a new martial art … anytime those things are happening at the same time it re-establishes some connections within the mind and body that prove to be really beneficial,” says Stark.