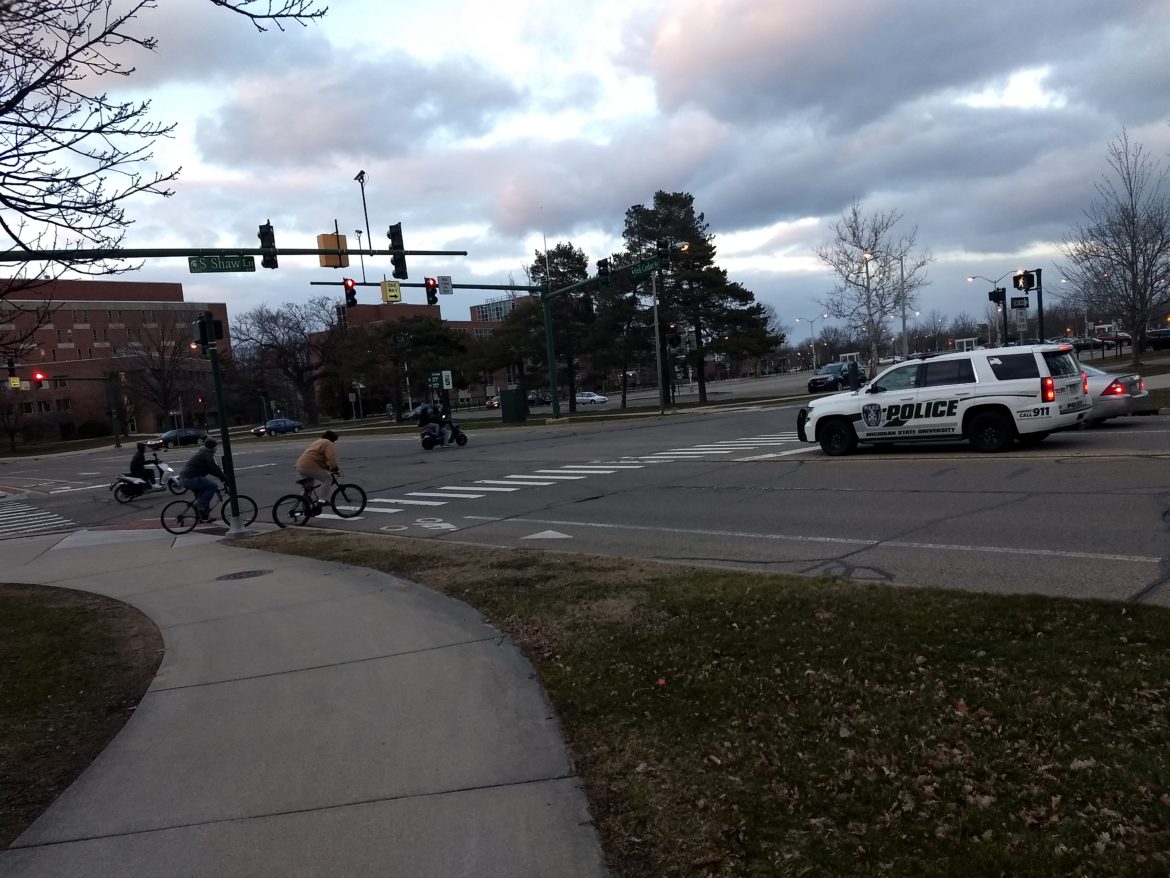 Students cross in front of an MSUPD police cruiser. Photo by Jack Kirwan

With MSU’s police force focused primarily on events occurring on campus, East Lansing residents receive the majority of the attention of ELPD.

“Really there’s personalities to every neighborhood, and the more that you could localize the police to be sensitive and human the less violence that would happen during an arrest,” said Robin Lee Berry, an East Lansing resident.

Since both police forces have been around for a long period of time, many people don’t think much of there being two police departments in the city of East Lansing.

“I don’t know what happened at the beginning of time, (Michigan State has) always had their own police department as long as I’ve been paying attention,” said East Lansing City Council Member Ruth Beier.

“I don’t have a strong opinion about (the two police departments) being separate,” said Victor Matelske, an East Lansing resident. “It seems like the powers to be on campus can put a little influence on the police department.”

Said Beier: “They have their job and we have our job and they’re not really the same, they police campus and we police the city.” East Lansing residents cross the street in front of the ELPD precinct. Photo by Jack Kirwan

David L. Carter, a professor of criminal justice at MSU, laid out some of the benefits of a major university like MSU having their own police department.

“There’s unique aspects of policing a university that are different than policing the general community,” Carter said. “Everything from the residence hall systems to dealing with students who are all within the same age group, common issues that you’re going to find at a university in terms of everything from drinking to just interpersonal disputes that are somewhat unique related to the university.”

Because both forces operate in East Lansing, there is a strong connection between the departments.

“They’ve historically had a good solid relationship, this is true at most colleges and universities that have their own police forces,” Carter said. “It’s understood, it’s reciprocal, it frankly is cheaper for example for East Lansing if they don’t have to have a police force dedicated to dealing with calls and traffic and security at the university.” “One of the greatest benefits I think of working in East Lansing is that we have been able to share a lot of the major events that we police with our neighbors at Michigan State University,” Connelly said. “We’ve worked really well with them and their staff has always been great to work for.”

“Even at the officer level, there is a lot of camaraderie in people that interact together and things like that which helps bridge those gaps,” Connelly said. “All too often when you find agencies that compete with each other or struggle working next door to each other it is because of a lack of communication effort and we really don’t experience that all too often with our neighbors.”

Although the two police forces have different jurisdictions, the end goal of both is to ensure public safety

“If (MSUPD) needed mutual aid, it’s as simple as their supervisor saying ‘can we get some East Lansing units to help?’ and literally we’re there,” Connelly said.

“If there is a major event, an act of violence event or like a natural disaster, we’re going to help out wherever we need to help out, that’s just the reality of this job,” Connelly said. “(By communicating with neighboring police departments), we’re a resource multiplier, this is part of what we do for the community because not everybody involved with MSU lives on campus,” Monette said.

“Crime does not have borders as far as one jurisdiction to the next. On a daily basis we assist other agencies and other agencies assist us as well,” Monette said. “Sharing information is important because it makes the community safer.”