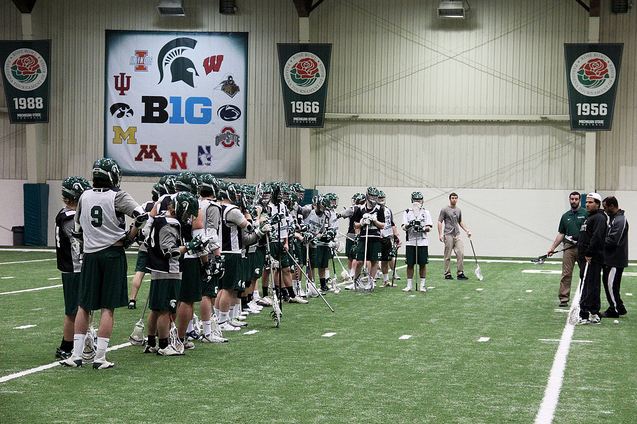 The Michigan State men's club lacrosse team gears up for a practice in East Lansing inside the Skandalaris Center. (Credit: LacrossePlayground.com) 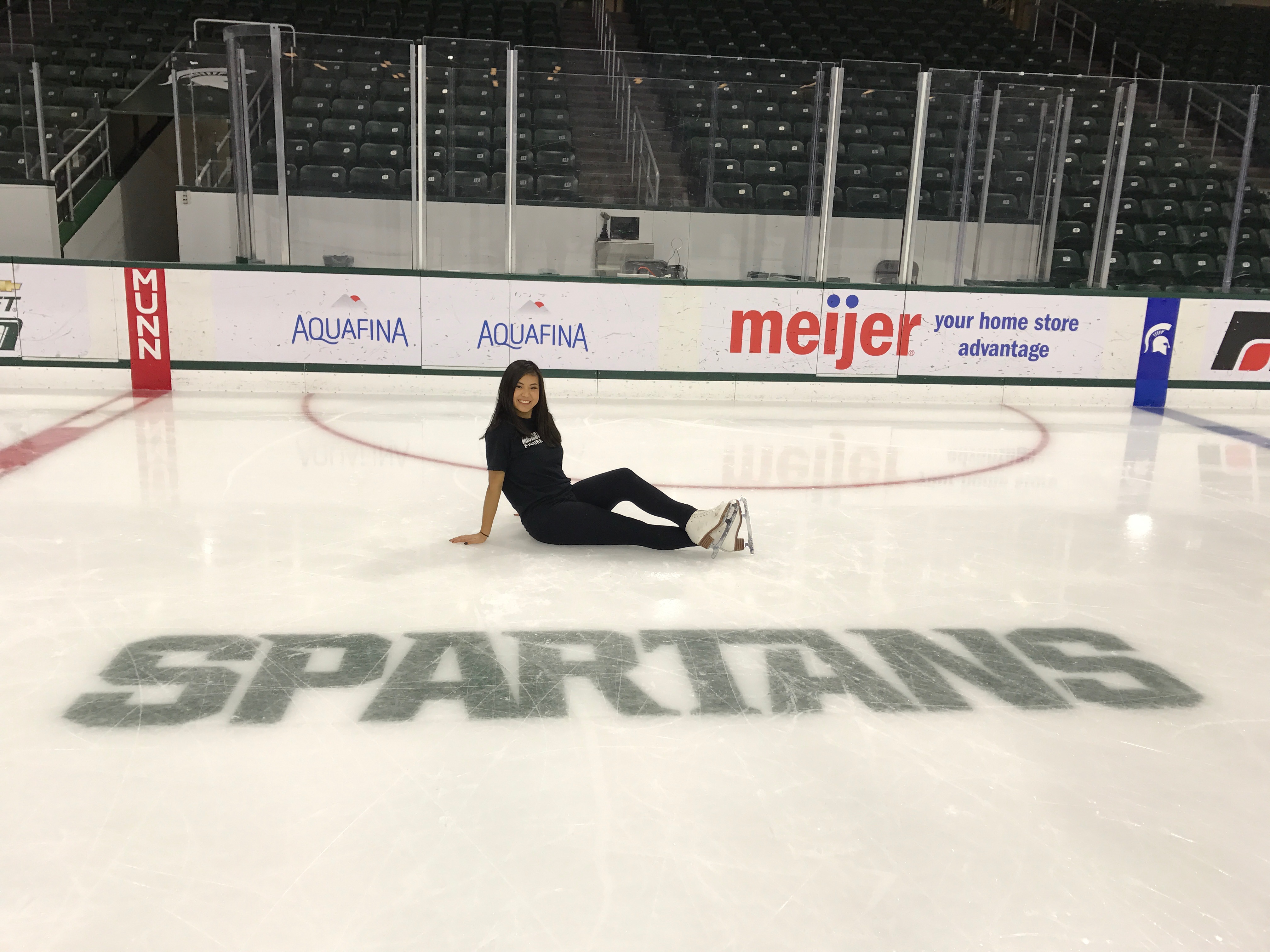 Angie Yao poses for a photo at Munn Ice Arena during practice on the campus of Michigan State University. Yao has been on the figure skating team for two years and the synchronized skating team for one. (Photo courtesy of Angie Yao) 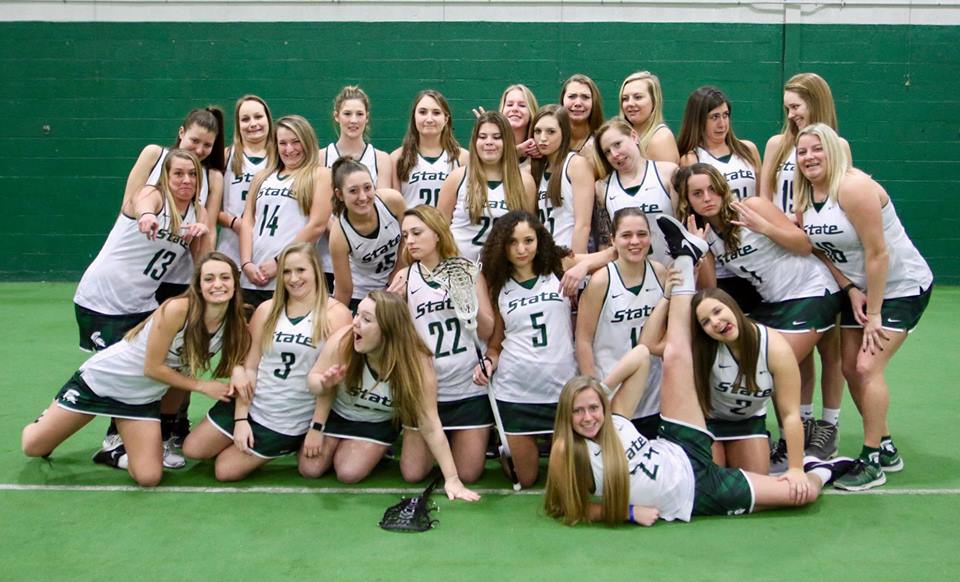 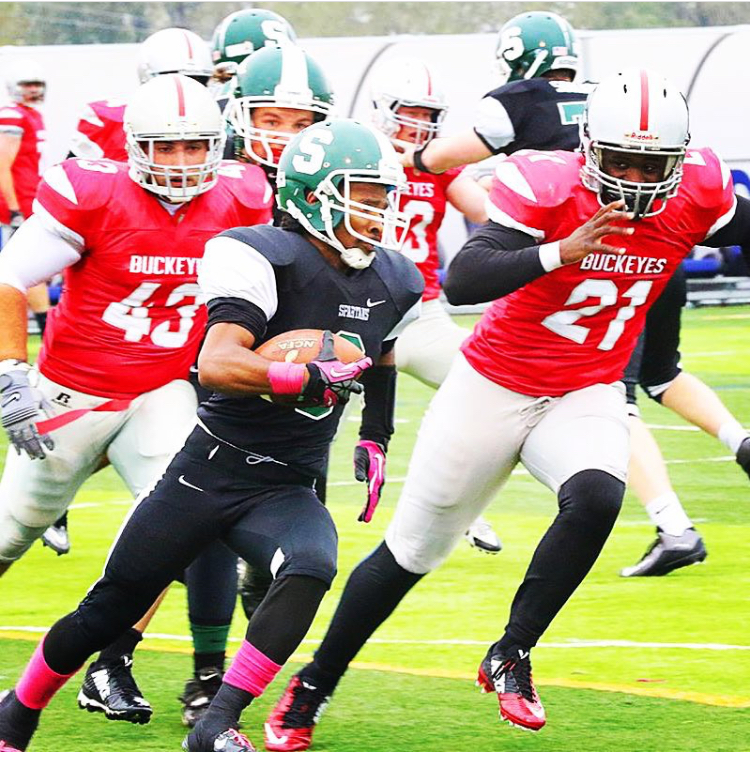 DJ Perry Jr. evades Ohio State defenders in a game this past season. He serves on the executive board of the club football team. (Photo courtesy of DJ Perry Jr.) 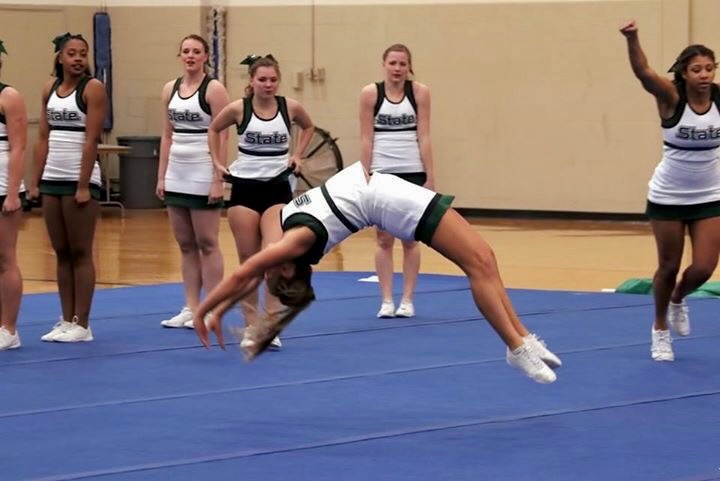 Kelsey Daldine performs a routine during a competitive cheer and stunt meet. Daldine travels across the country with the club to perform. (Photo courtesy of Kelsey Daldine) 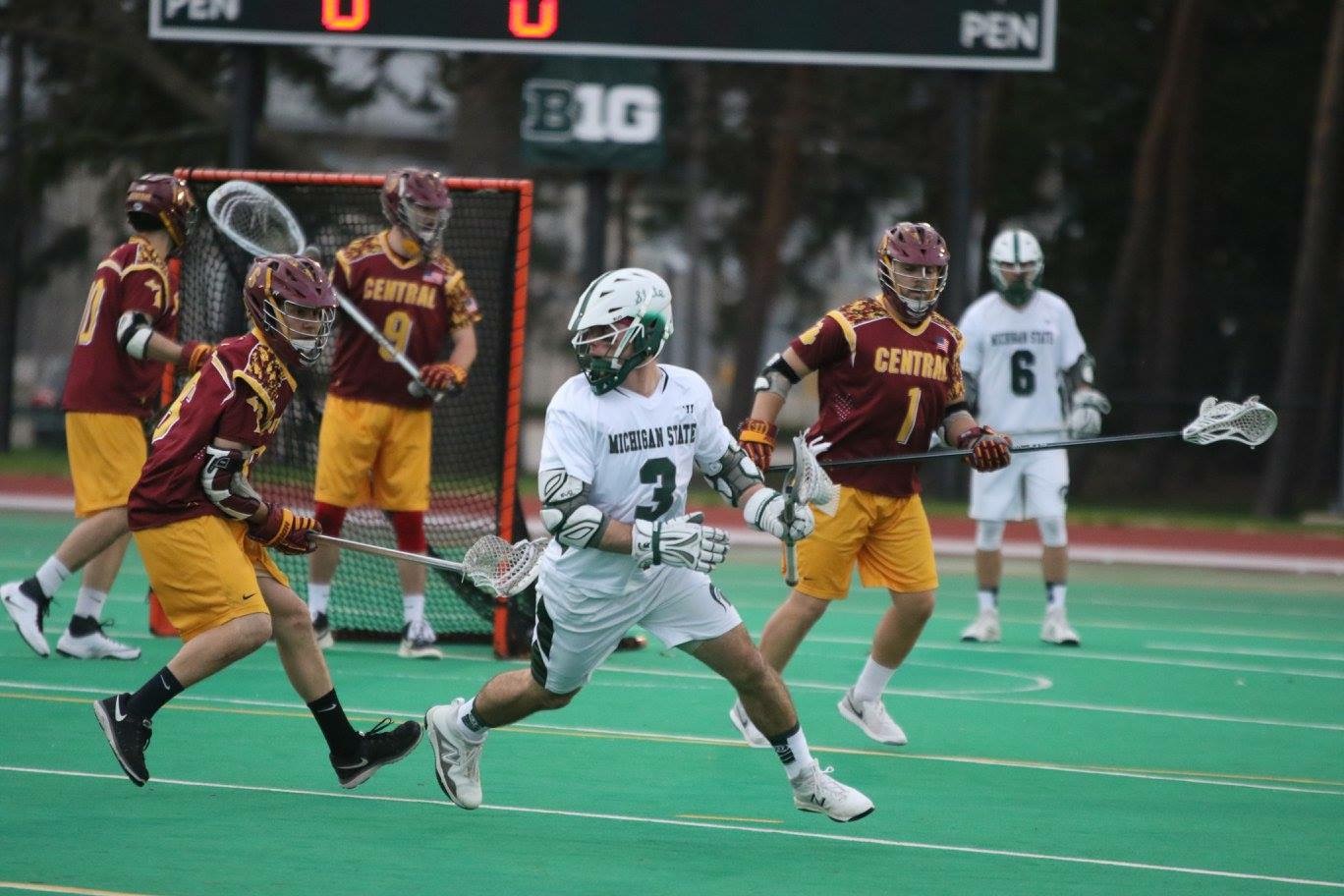 Jess Todd, No. 3 in white, evades Minnesota defenders during a men's club lacrosse game. Todd has been a member of the team for four years. (Photo courtesy of Jess Todd)

There are thousands of student-athletes who participate in NCAA-sanctioned sports on hundreds of campuses across the nation.

Some are on scholarship, many receive help from college academic support personnel to stay on top of their coursework, and most have their their athletic travel expenses covered.

And then there are the thousands of student-athletes who participate in club sports.

“Sometimes I do find myself a little behind because I skate four days a week. I don’t know, when I’m not at the rink I try to get all my homework done as fast as I can.”

Club student-athletes typically do not receive sports-related scholarships, have no special academic assistance and pay out-of-pocket for their travel expenses. Yao, a native of Buffalo Grove, Illinois, said she often feels overlooked.

“I’m at practice all the time and don’t have time for work,” Yao said. “We have morning practice at 5 a.m., so during the day I’m super tired all the time. Teachers don’t really care, either. I have practice Monday and Sunday nights until 11 p.m. so then I have to scramble at night to get stuff done, and that’s hard.”

At Michigan State University, there are 53 club sports programs — from as big as football and basketball to as small as quidditch and kendo. These programs serve as outlets for students to continue — or find — their passion for sport.

However, one of the biggest problems club sports athletes run into during their time as students is travel, said Ellie Schramm, a member of the women’s club lacrosse team at Michigan State. Not only do some students pay out of pocket for travel for tournaments and games, but many are forced to miss school and make up work they wouldn’t have had to otherwise.

“Every year we either travel to California or Florida, and this year we’re going to Florida for a tournament,” Schramm, a senior food science major from Columbus, Ohio. “We’ll play four games down there. That requires us to miss about two to three days of school. We have that going for us, and then in the spring we travel to places around Ohio, Kentucky. We’ve gone to Wisconsin before, Indiana, places like that.”

For philosophy and political science senior DJ Perry Jr., having a commitment to stick to — like being a captain and serving on the board of the newly formed MSU club football team — actually helps him stay organized.

“It’s not much of a time constraint,” said Perry, of Detroit. “Personally, I feel like it’s helped me be better. I’ve played football since I was 4 years old. So I always had a set schedule with my days. I’ve been able to use that and build my schedule (help with) time management.

“It forces me to be a little more responsible.”

Kelsey Daldine, a kinesiology senior from Clinton Township, Michigan, says her time on the competitive cheer and stunt clubs at Michigan State have increased her organizational skills.

“For me it has a positive impact because if I didn’t have set practice times and travel times, then I wouldn’t (be as good with time) management as I am,” she said. “So it kind of sets a schedule of what I need to do every day.

“Some people look at it as scary and overwhelming, but I look at it more as structure — which is good for me.”

Jess Todd, a journalism senior from Massachusetts, recalled a time when traveling to Baltimore for the Michigan State men’s club lacrosse tournament threw a wrench into his weekly routine.

“I kind of had an ‘oh, crap’ moment and had to run around on Tuesday and get everything done that I needed to in order to finish my news package,” Todd said. “I wound up skipping a class or two because I needed to. You just have to know that this stuff is coming up and you’ve got to prepare for it.”

“I trained this past year harder than I’ve ever trained before for this season,” Perry said. “And I had all that completely taken away from me because I got hurt. But being a captain and being on the (executive) board, I still had to be there and I couldn’t miss out on things just because I was hurt.

“Dealing with that, that takes a mental toll on me. It makes me want to go sit down and do nothing. But I still have this obligation to this team, I’m a still a part of this team, so I gotta do what I gotta do. There were times when I wanted to go do my work or see a friend, but you have to have dedication for it whether you’re playing, coaching, watching, cheering. If you’re involved in it, you have to be there dedicated to it, just like everybody playing or coaching.”

When a student-athlete on an NCAA-sactioned team gets injured, they may have an entire team of medical professionals to help them with diagnoses, rehabilitation and in some cases, financial expenses for surgical procedures.

“Whatever healing or rehab you need to do, you’d go through (the student health center) or your own primary care physician,” Perry Jr. said of club athletes. “The team is completely separate from that. But we do sign wavers like most teams. We’re pretty much on our own.”

At a Big Ten university with more than 50,000 students like Michigan State, there are plenty of athletes across multiple sports.

And, even at a Big Ten university with a significant sports culture, club athletes can sometimes feel left out, Todd said. Instead, varsity sports often get most of the attention.

“There’s kind of a stigma attached to the word club, as much as you’d like to avoid it,” Todd said. “But when they hear it people assume it’s an intramural thing where they do it for fun. But there definitely are teams at different schools, especially here, we take this stuff pretty seriously. Even though the word club has to come in front of it because we’re not a NCAA team doesn’t mean we’re any less serious.”