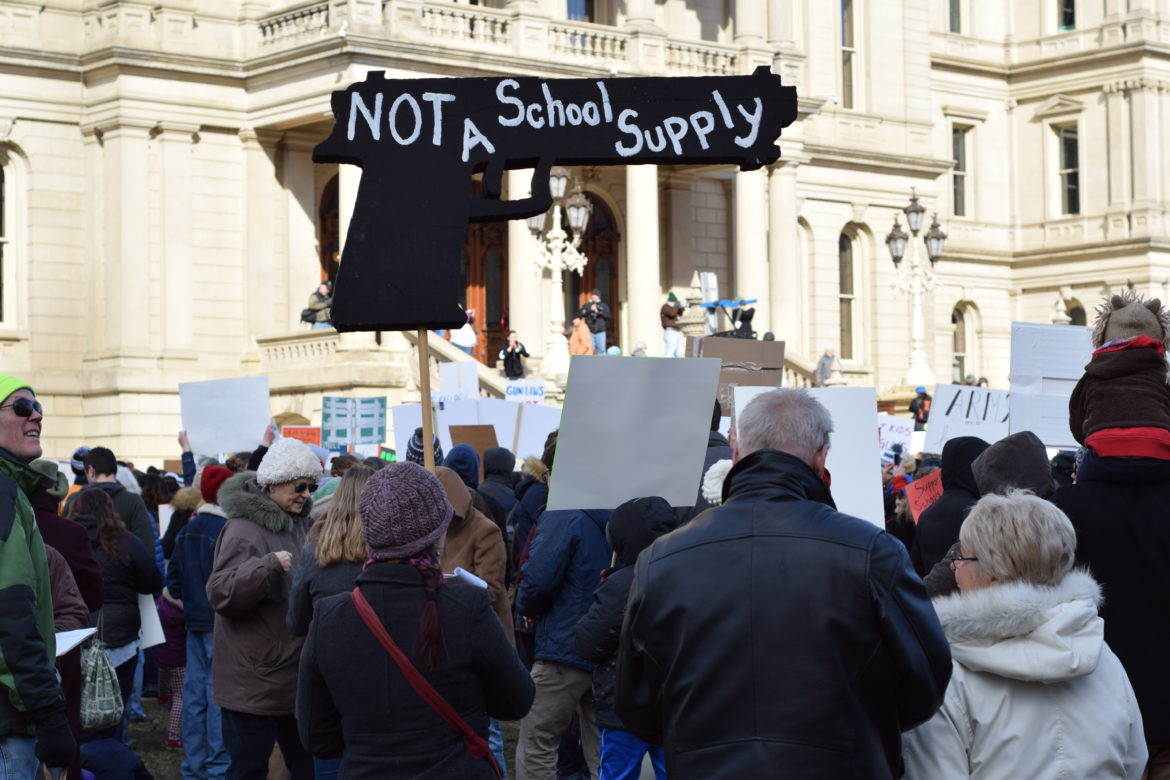 Thousands of people attended Lansing's March Four our Lives on March 24, in wake of the Stoneman Douglas High School mass shooting in February, that killed 17 people.

Thousands of people marched from the Hall of Justice to the State Capitol in Lansing, Michigan to show support for the Stoneman Douglas shooting victims on March 24.

The event is part of a larger wave of demonstrations that brought thousands of participants in the March for Our Lives to the streets of Washington, D.C., to voice their opposition to gun violence.

The main march – organized by a group of students and survivors of the shooting – took place just blocks away from the Capitol Building, but the movement’s impact permeated far past the nation’s capital. Hundreds of sibling marches were organized in cities across the country, including in Lansing.

“I thought it was a really good idea not only for the people in Lansing, but worldwide,” said Lansing resident Amir Franklin. “The only way to stop shootings and things that matter to us, is by having people come together and support the same issues so that our voices can be heard.”

Just like the national march in Washington, D.C., Lansing’s March for Our Lives rally was led by high school students, including Cydney Jenkins, a 14-year-old from Farmington Hills, and Michael Flynn III, a former Lansing Catholic football player who knelt for the National Anthem during a number of games in 2016 in protest of inequality and violence against African Americans.

Lisa Barker, a Portland, Oregon, resident visiting Lansing with her family, said she was amazed by the determination of the student organizers of the march to spread their message.

“I thought it was really cool actually that some of the younger generation was taking a stance on what they thought was really important to them,” Barker said.

Barker said that while the march itself was good to see, she hopes something positive will stem from it.

“I just don’t really know what they really accomplished from it, but I was happy to see that everybody came together and did what they did,” Barker said.

Speakers and protesters in the march were lobbying for legislative action to take place to reform the United State’s gun laws, which allows people in most states to purchase and carry firearms as long as they have a permit.

At the rally, Jenkins addressed to the crowd:

“We are here so there is never a child being slaughtered in a school ever again. Not in a movie theatre. Not in a concert. Nowhere in the U.S. we will see innocent people slaughtered as such  large scales. Never.” Speakers at Lansing’s March For our Lives rally voiced their frustrations to the country’s gun laws.

Megan Kramer, an employee at the Radisson Hotel in Lansing, said that while she supports the message of the March For our Lives and believes there should be a reform to the country’s gun laws, she doesn’t think guns should be banned all together.

“People react in such extreme ways, like one or the other,” Kramer said. “There’s one side rooting for almost no guns and then there’s one side protecting their rights all together. There needs to be more room in the middle, like more grey area.”

The perpetrator of the Stoneman Douglas shooting was armed with an AR-15 semi-automatic rifle. Kramer said an example of a temporary compromise in regards to the issue of gun control could be prohibiting the use of semi-automatic assault weapons, such as the one used in the Parkland mass shooting.

“I would say the grey area would just be banning AR-15s. There needs to be a larger push for just one move at a time. It’s not going to be just an all guns or no guns kind of thing,” Kramer said.

With a growing number of mass school shootings happening in the U.S., some debate has been raised as to whether or not teachers should be armed with firearms themselves to protect students from such incidents.

“I don’t agree with the idea to have teachers have guns because I think it will just create more chaos,” Franklin said.

Franklin said she believes tighter security in more schools across the country is necessary, however.

“There should be more strict security when it comes to our school systems,” Franklin said. “There needs to be people with metal detectors and things of that nature, because anybody and everybody shouldn’t be able to be let in a school because these are our children and children are the future.”

Kramer, however, said better results will come if changes are made in government, not schools.

“It shouldn’t happen at the school level, necessarily, it should happen at the federal level to implement new policy and basically amend the second amendment,” Kramer said. “If we just armed security guards and make that more normal for schools, then it’s going to become normal. It makes school a less safe environment for kids.”