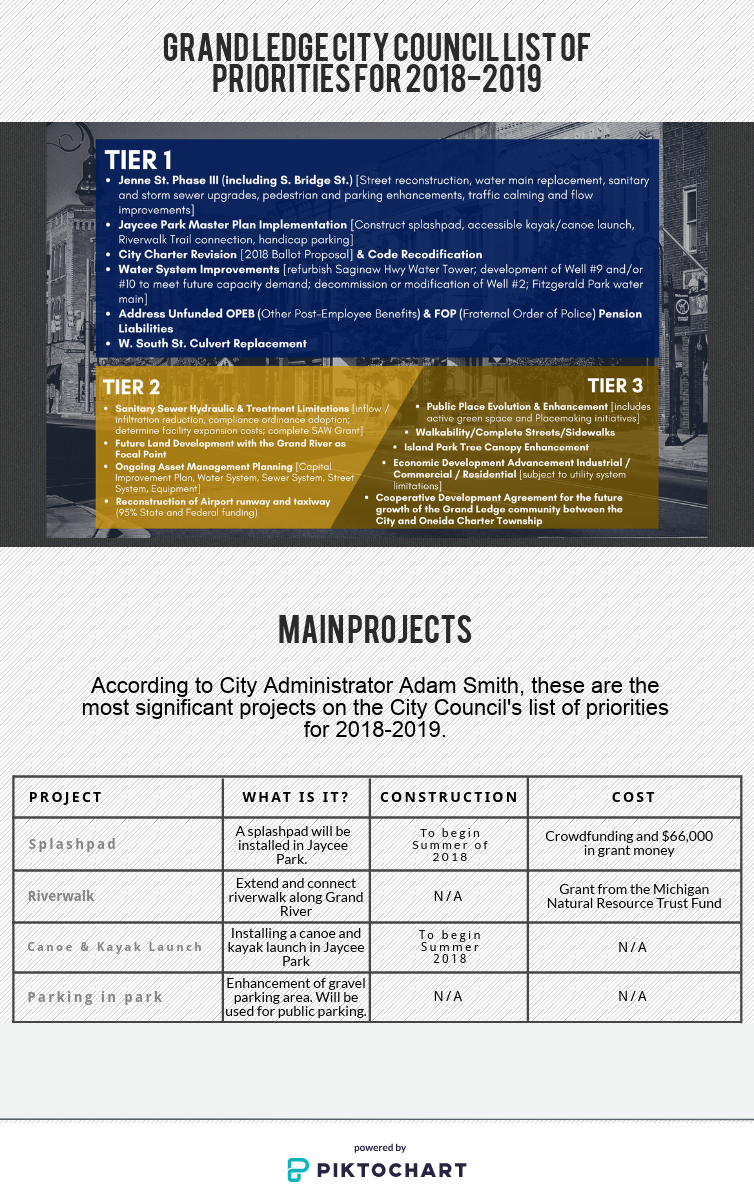 A list of priorities composed by the Grand Ledge City Council will bring in members of the community through a large park project that’s being referred to as the Jaycee Park Master Plan.

Jaycee Park, one of the many recreational areas in the City of Grand Ledge, will undergo several updates and construction work beginning this summer. The master plan for the park, originally set forth in 2013 with a construction start date of summer 2018, was officially adopted at the council’s Jan. 8 meeting earlier this year.

According to the Grand Ledge City Council website, “Jaycee Park is 5.92 acres of pristine park land, situated along the Grand River.”

Adam Smith, the city administrator of Grand Ledge, talked about the City Council’s routine in choosing which projects to prioritize during the two-year periods.

“There are a number of workshops that the council holds in which they develop these priorities, and it is typically done in the latter part of the year, so they may be adopted at the beginning of the year,” Smith said.

Smith said the city received a grant through the Department of Natural Resources to fund this specific plan.

“The Jaycee Park Master Plan implementation – those specific items are tied into a partnership with a grant through the Department of Natural Resources,” he said.

Smith said the 2018 – 2019 priority list was first generated in 2013 in partnership with the community, but also represents the council’s plan to keep in compliance with federal and state requirements.

According to the Grand Ledge City Council’s list of priorities for the 2016-2017 year, the Jaycee Park implementation and drinking water improvements were on the second tier.

This year, both the Jaycee Park Master Plan and the water quality improvements are on the first tier of the list of priorities.

The official Parks and Recreation Master Plan said the projects were based on several goals, like involving the community, building a “common ground among the City of Grand Ledge residents and stakeholders in addressing the future recreational needs” and supporting the implementation of improvements for universal access to city parks.

In the master plan, 79.60 percent of Grand Ledge residents surveyed said enhancing existing parks is most important for Parks and Recreation in the next five years and 85 percent said they would support funding for parks such as Jaycee Park and Oak Park.

“City Council is always encouraged and interested in the fact of the public, but it also represents other items relative to compliance and timing with federal and state resources and regulations,” Smith said.

Of all of the projects listed for development on the priority list, Smith said that the Jaycee Park Master Plan was one of the most notable because its progress has already begun.

Smith said that details within the master plan are still being worked out. For instance, the city has yet to select a general contractor for construction in the park, and the construction timetable must be solidified.

Smith said that the goal is to have amenities in the Jaycee Park Master Plan accessible to the public by the end of the summer.

“In an ideal world, those will be accessible in late summer 2018,” Smith said.

In his role as public services director for Grand Ledge, Larry LaHaie said that he advises the Grand Ledge City Council on certain projects that he thinks would benefit the community. In his opinion, the most important work to be done concerns the implementation of the Jaycee Park Master Plan.

“It would be the work in Jaycee Park – the Splashpad and the trail connection and the kayak launch,” LaHaie said.

LaHaie talked about the city’s goal of having the Splashpad completed by late summer. Like Smith, LaHaie expects that goal to be attainable.

“I expect it will be happening this summer, yes,” LaHaie said. “Spring into summer. I expect that to be a three-month project.”

LaHaie also talked about other elements of the master plan. He said there is a plan to connect two walkways in Jaycee Park to make a trail that’s more continuous.

“If you’ve been out there, there’s a walkway that goes along the Grand River that right now it’s got kind of a tenuous link to another walkway that extends down M-100 out to M-43 and along M-43,” LaHaie said. “There’s a missing segment in there, if you will, that will be built there in Jaycee Park that would be more or less continuous than it is right now.”

Mayor Kalmin Smith said he and other members of City Council try to engage with residents through the City Council meetings and through listening to community concerns when it comes to certain topics and projects.

“It’s a small town. People walk into the office all the time with questions,” he said. “Most people know where I live, but it’s really, it’s very seldom you run into angry, irrational people.”

Mayor Smith said there are usually “very few” members of the community go to the City Council meetings.

However, he said residents can watch every meeting broadcasted on television three times a day and they are also livestreamed on Facebook.

“We’ve got a great staff and you can see from the meetings the council members, they’re all friendly people who work together,” he said.

Mayor Smith also said it’s important to serve the Grand Ledge community and ensure they’re aware of what is happening.

“If it’s well-run and if the people who run it communicate what they’re doing really well and are open to input from the community, things really go easily,” he said.

Mrs. Bennett, who preferred to not have her first name used, said she has been a resident of Grand Ledge for years.

She said she usually picks up the newspaper in City Hall to learn more about the City Council and the projects going on in Grand Ledge, like the Jaycee Master Plan.

“Usually everything is on the front page. I mean, of interest,” Bennett said.

She said she has never been to one of the City Council meetings, but that she still hears about what is happening through other forms of communication, like newspapers.

“I think they’re (City Council) doing a really good job of that,” she said.

Bennett also said she thinks the Splashpad was a good idea for the community.

“I thought that was a really, you know, good thing,” she said.

Terrance Augustine, who owns Flour Child Bakery with his wife Beth Augustine, sits on the Downtown Development Authority Board for Grand Ledge.

Augustine said a lot of the projects on the City Council list of priorities affect his family directly, primarily the reconstruction of Bridge Street, which is the street Flour Child Bakery is located on.

“The plan is to take the parallel parking and put angled parking back in so we can fit more people,” he said. “So, that’s pretty exciting for us.”

He said the city plans on reconstructing the parking lot located behind the bakery as well, which would be beneficial to their business since parking seems to be an issue.

“The other thing that we’re really looking forward to is a culvert bridge that’s out by Beagle (Elementary) School,” he said.

Augustine said he is also excited for the Splashpad being built in Jaycee Park because his kids will be able to use it.

“I’m really excited about the Jaycee Park one because I was one of the first ones that, we created the big master plan,” he said. “I used to run the farmer’s market in town and the whole idea was to try to find a place we could do the music in the park.”

He said he thinks the Grand Ledge City Council does a good job at listening to the community and that the Splashpad is an example of that.

“That was a citizen-driven priority,” he said. “Basically they started fundraising and they started a GoFundMe page, and eventually the city was able to write a grant.”

Grand Ledge resident Ruth Creyts, in contrast, said she has not heard a lot about the priority list or the details of the Jaycee Park Master Plan. As owner of The Salvage Yard Antiques store in the downtown area, she said that she has heard mostly about construction of the Splashpad, a detail within the park’s master plan.

“The only information I’ve heard on the Splashpad is through maybe articles in the paper and on the Grand Ledge Community Facebook page,” she said. “That’s pretty much how I’ve heard of it.”

For Creyts, the Splashpad is a family-friendly addition to Grand Ledge. While she said that it’s good for residents, she also said that she’d also like to see the Grand Ledge City Council focus on businesses within the community.

“My daughter’s older, so I don’t think I’m going to use it,” Creyts said of the Splashpad. “I think it’s good that they’re focusing on residents and making it more family-friendly, but as a business person and a retail person, I do think there needs to be more focus promoting businesses in here.”

Creyts also had suggestions for the Grand Ledge City Council.

“I guess if I had to say it to the City Council, it seems that they need to make it in the wintertime sidewalk-friendly with the snow, getting it cleared off faster for the businesses,” Creyts said. “We run into problems with putting it up on the curb and then the city comes and puts some up on that pile.”