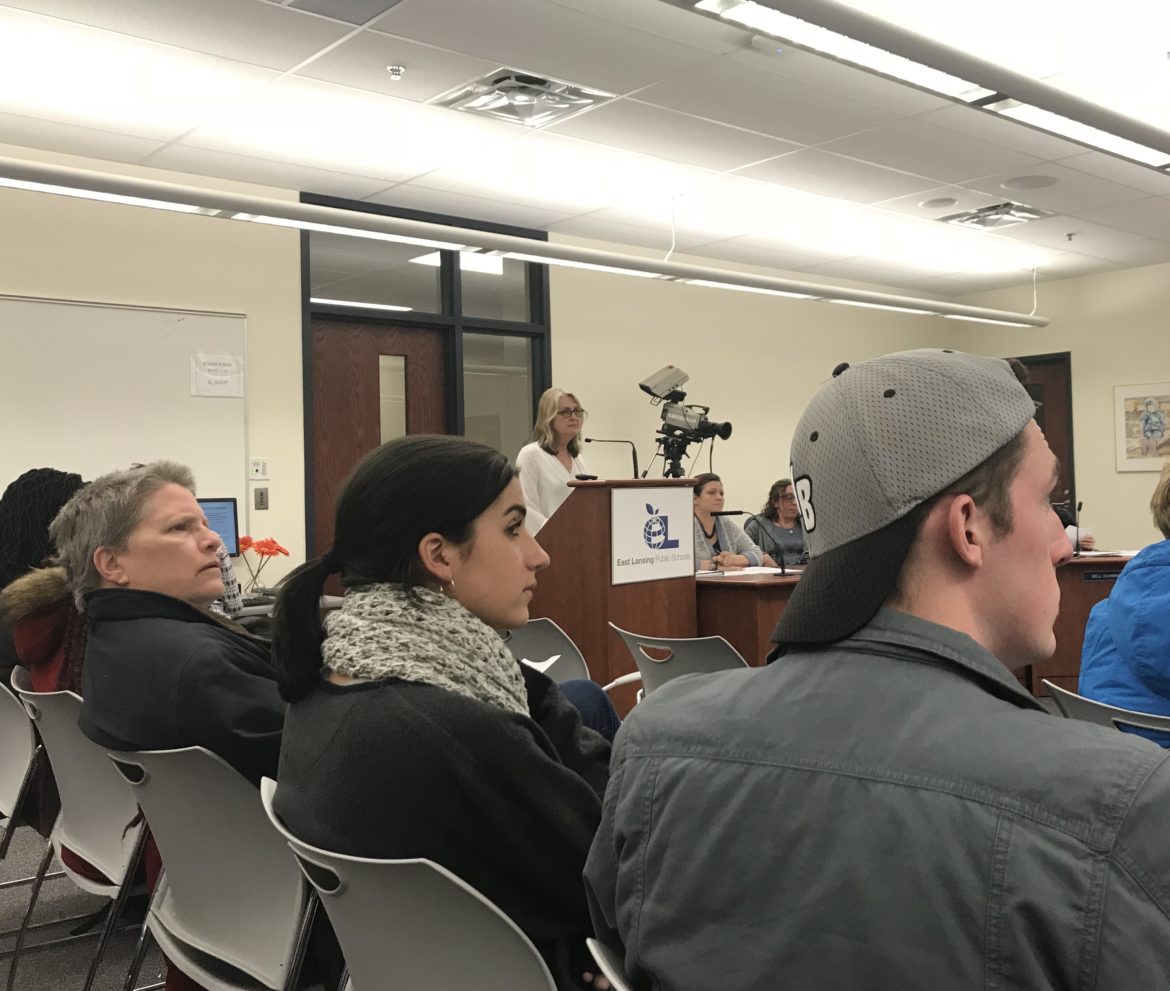 Students, faculty and community members listen in the crowd of the East Lansing Board of Education's March 26 meeting. At this meeting, the board discussed security upgrades.

Less than a month after students participated in a national walkout for gun control, East Lansing School District will see new security upgrades.

At the elementary schools, an audio and visual buzz-in system was installed in the buildings during spring break, Superintendent Dori Leyko said. The district’s technology department will conduct training for office staff. The district will also work with administrators to plan consistent communication with elementary school families.

At the middle school, Leyko said the district has preliminary plans to upgrade the main entrance. But before officials can move forward with that, the district must gather more input from middle school administrators and staff.

As for the high school, Leyko said “it’s a whole other ballgame.” A safety and security meeting was held on March 27 to discuss possible upgrades.

“With the design of this building and the number of used entrances, the high school is a much more complex building to secure,” Leyko said. “We will likely be looking at short- term solutions and long-term solutions that may require some modifications to our current entrance, but again, more information will come.”

Following the Parkland, Florida, shootings, East Lansing’s school board unanimously approved a resolution opposing guns in schools. Trustee Nichole Martin, who is a liaison on the Mental Health Advisory Committee, said the East Lansing School District committee wanted to thank the board for its decision.

“They felt like with the board’s resolution, the leadership helped with guidance for supporting students to do things that they chose to do,” Martin said. “They felt like the resolution sparked the ability to empower students when they came up with the idea.”

Martin said the middle school walkout had five speeches that focused on school safety, was led by seventh and eighth graders and was very well-organized. Students even painted a banner reading, “you are loved,” that they sent to Parkland.  At the high school, students sold shirts, registered to vote and had the option to contact their representatives to express their gun control concerns.

“Really well done,” Martin said. “When you allow kids to speak, they really do rise to the occasion. That’s always kind of my mantra.”

Board of Education President Kate Powers also received community input following student gun control efforts. She attended the District Parent Council meeting, where citizens encouraged parents to talk with their children about guns in the home.

“There’s a very high percentage of children that are shot and killed by their peers in homes where there are unlocked weapons,”  Powers said.