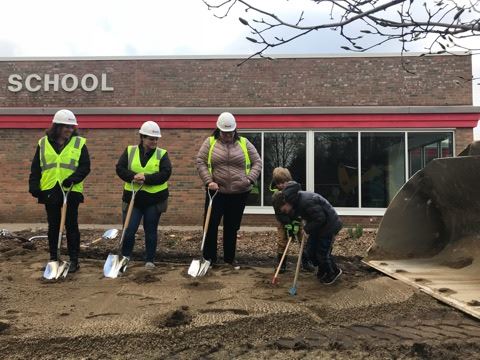 The East Lansing Board of Education, and other members of the community, break ground at Red Cedar Elementary on April 9. Around $10 million is being spent on renovations.

East Lansing’s school board officially broke ground on Red Cedar Elementary, the first of six schools in the district set to undergo construction on April 9. The building will reopen in the fall.

Community members, city officials, school officials and children attended the event, including Ruth Stump, president of the Red Cedar Community Association, a group that helped promote the reopening of the school.

She said Red Cedar Elementary is “the nucleus of the neighborhood.”

“We’re very much in favor of having the school back in operation again,” Stump said. “It has always been a very unique school.”

Stump said the international population surrounding the school and influences from Michigan State University made Red Cedar a diverse environment.

“That really provided an international education for our kids, and Red Cedar was very welcoming and open for kids of all varieties,” Stump said. “It’s a special place.”

East Lansing resident Liz Schweitzer, who is also a part of the Red Cedar Community Association, also spoke highly of what she considers an “icon” in the neighborhood.

“All three of our kids went here and they had friends from all over the world,” Schweitzer said. “I really respect the values that they required here at Red Cedar as a result of that diversity experience.”

The school construction projects are being funded by a $93.77 million bond issue approved last year. Around $10 million is being spent on Red Cedar’s renovations.

“The community showed, especially during the school bond vote, that this was something that is a priority for them,” said East Lansing City Councilmember Aaron Stephens, who also attended the ceremony. “And I think our school board is doing an amazing job in making that a reality.”

Superintendent Dori Leyko said school officials actually broke ground on the project in March, but thought the warmer weather in April would be more suitable for a ceremonial event.

“We felt like this was an opportunity to bring our neighbors and community together to celebrate our first milestone,” Leyko said.

In the summer, there will also be a ribbon-cutting ceremony and a tour of the renovated building.

“Our neighborhood is so ecstatic that this place is going to open again,” Schweitzer said. “It’s a focus for the community. We think it really identifies with the values of our neighborhood.”