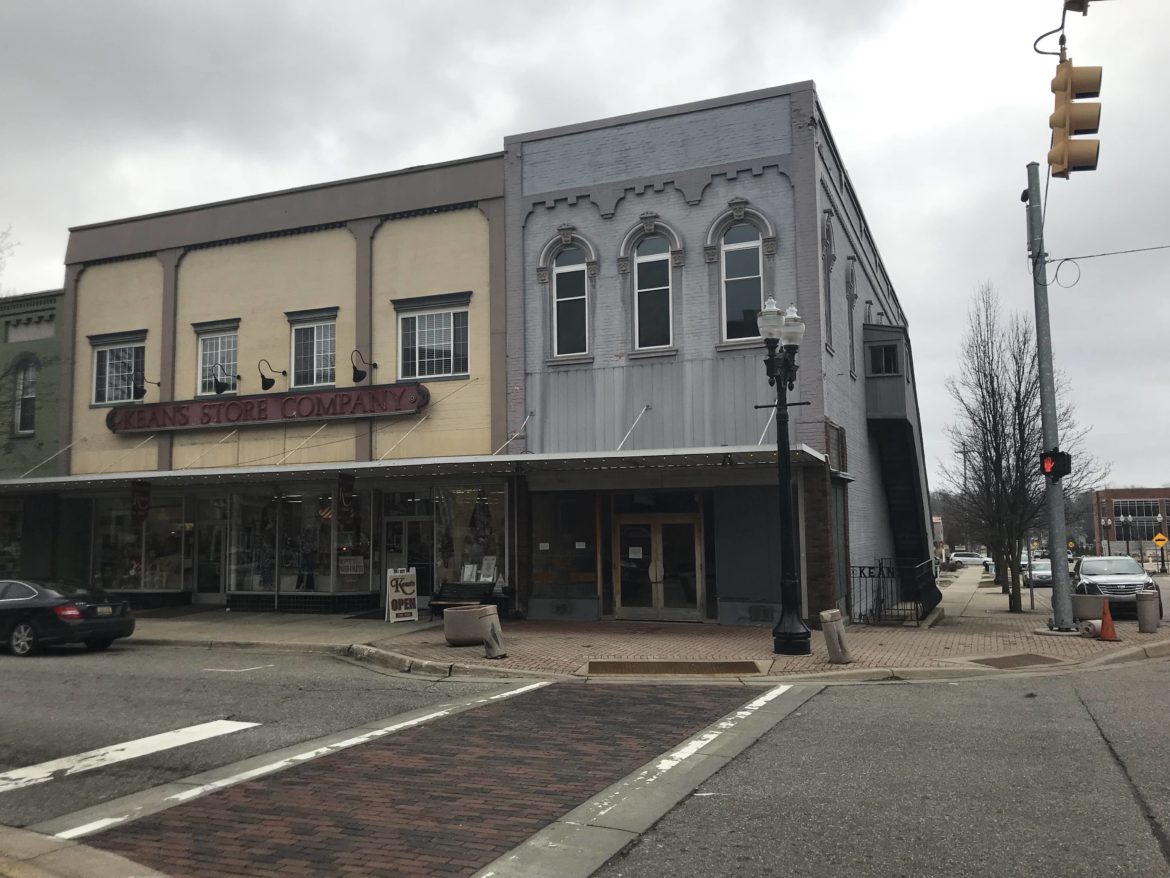 Although the proposal hasn’t been approved yet, The Building 402 Project is set to start construction in the summer of 2018. The project is the renovation of Building 402 of South Jefferson Street, which was previously The Baja Grille. The Baja Grille closed its doors after an electrical fire in June of 2015, according to the Lansing State Journal.

Teresa Wren is the owner of Building 402 and Kean’s Store Company. Kean’s was also affected by the fire of 2015, as it is adjacent to the old Baja Grill/Building 402.

Wren has high hopes for Kean’s during the project, even during construction.

“It will cause more foot traffic and more excitement because whenever there’s something going on, we’ll have more people in here. They all want to know what’s going on,” said Wren.

“I don’t think any of the construction would block the sidewalk to where someone couldn’t get in our door.” Building 402 located next to Kean’s. Photo provided by Addie Pyatte.

The renovation of the building will include two new apartment units on the upper level, space secured for an independent restaurant on the first level and commercial space in the basement, according to the Wren Project Proposal Request.

“People waiting for tables will be shopping in here. They’ve already informed me that they are going to have beepers that extend like a block long and they can wait for their tables. It’ll be great for us. Plus, it’ll bring people from out of town,” said Wren.

The two new apartments will also be good for Kean’s, said Wren.

“If I get some really nice renters in there they may bring some people into town and they’re always going to come to Kean’s because this is part of the entertainment down here.”

In a historical district square like Mason, renovating historical buildings can be challenging. In 1982, the City of Mason established the Historic District Commission to protect the historical heritage of Mason in designated areas, according to Mason’s website.

The Mason Historic District Commission reviews plans for construction, alteration, moving, exterior changes, signage, or the demolition of all buildings in the historic district. Building 402 located next to Kean’s. Photo provided by Addie Pyatte.

While the project has not been officially approved just yet, Mason City Administrator Deborah Stuart said that there is a high likelihood of approval from the state.

“We got a letter of interest saying that they were basically interested in the project, but there’s a few more things we need to do,” said Stuart.
The proposed project will cost just under a million dollars and requires some unique criteria due to its historical nature, according to Stuart.

“While there are some additional criteria to maintain that historic nature in our downtown, it actually insures that the property values stay where they are and grow because that’s really what makes us unique compared to other communities. There’s some additional loops, for example in this project because of the funding type we had to go through our state historical preservation office and they had to sign off, and they’re very supportive of the project. They didn’t have to ask for any changes which is unusual. They’re supportive of what the proposed project is,” Stuart said.

The State Historic Preservation Review Board (SHPO) is a board of members appointed by the governor and are professionals in architecture, American history and historic preservation according to the MSHDA website. Cultural Resource Management Specialist of the SHPO, Brian Grennell said the board reviews projects when they receive federal funding. Grennell also said that the Building 402 Project did well in its review. “In this case we had a historical architect who reviewed it and he said they’re actually doing a good job. The work has to meet the Secretary of Interior’s standards; they are standards that are put out by the National Parks Service. So, that’s what we comment on, specifically if it’s going to be an adverse effect or if it won’t be an adverse effect and in this case it’s not. It’s going to be a good thing,” said Grennell.

Established in 1865, Mason celebrated its 150th anniversary in 2015, according to the city of Mason’s website.

The historical buildings are important to the square’s appearance, according to Shaun Sodman, owner of the downtown ice cream parlor, The Daily Scoop.

“It gives Mason a unique look, definitely. It’s historic. Everyone comments on how Mason is a cute town and such.”

Sodman also thinks the developers will do just fine at maintaining the history of the building as long as they stick to the code.

“They’ve got a lot of things they have to follow. There’s a pretty strict code, so I’m assuming they’ll stick to it,” said Sodman.

Considering the close proximity of the project to other businesses in the downtown square, it is possible that the construction could affect these businesses. However, Sports Stop owner Kevin Schaefer doesn’t believe the project will produce any negative effects, unless it affected parking near his shop.

“Depending on where they put all the construction equipment, it could affect the parking across the street for sure,” said Schaefer.

Since building 402 has sat vacant for about three years, the community member will most likely be excited to see the project begin, according to Michigan State UniversityConstruction Management Professor and Program director, Tim Mrozowski.

“I think the community would love to see some activeness there. I’m sure that they’d be very supportive of work in that building,” said Mrozowski.

“When you think about Mason, it’s one of those communities that has a very nice, pleasant downtown because of the older architecture. A project like that that helps them retain the theme of the city would be of course very beneficial.”

It’s important for communities with historic districts to maintain their buildings to keep their individuality, according to Mrozowski.

“It helps them create and identity and a theme. In the U.S. we don’t have as strong of culture of historical preservation as they do in other areas, so I think we’re preserving our history and our culture,” said Mrozowski.