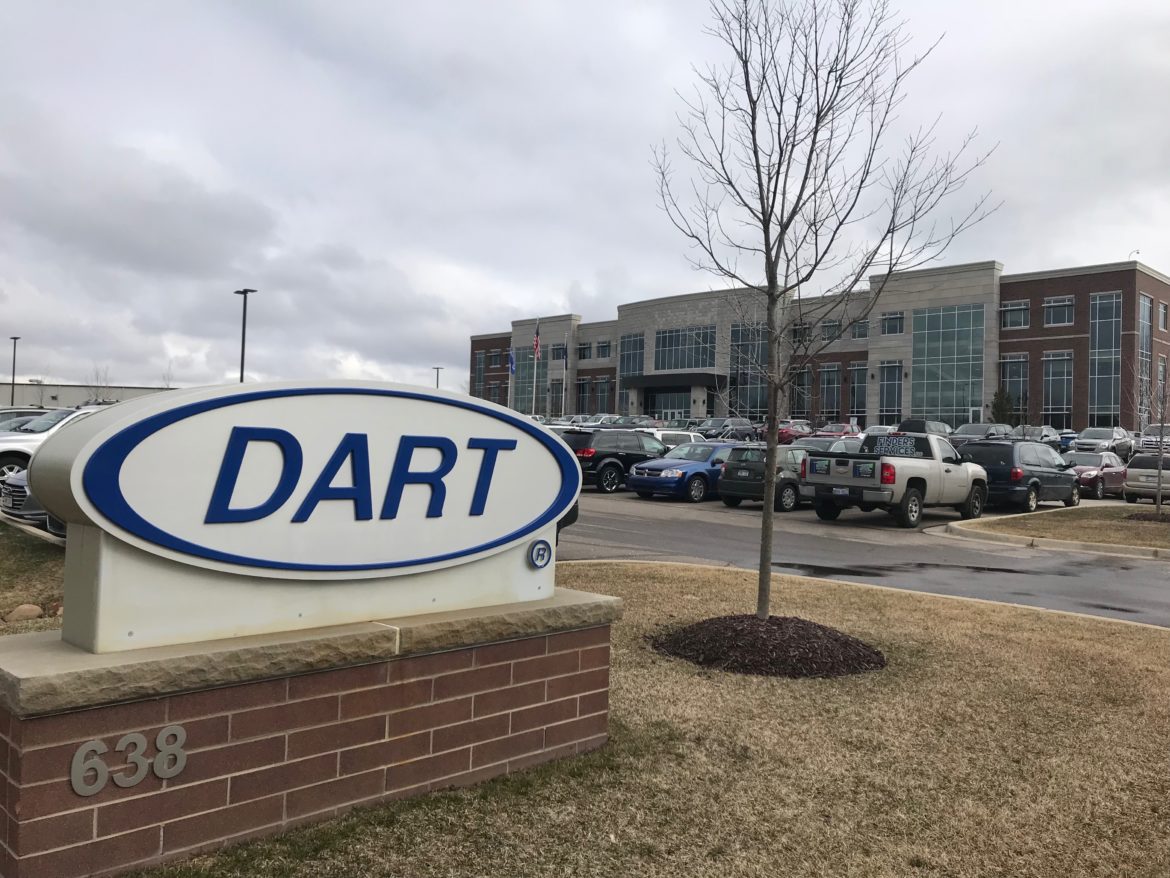 The Dart family business that started close to 100 years ago continues to grow in the city of Mason and all over the world.

Dart Bank and Dart Container Corporation are related to one another through the same family but from different lines of the family, said Mayor of Mason Russell Whipple.

Dart Container Corporation was developed in Mason and has continued to grow as they start to expand internationally.

Mason City Administrator Deborah Stuart said, “They’re an international corporation with businesses all around the world … with their headquarters being located here, they’re very active with volunteer work and many employees live here in Mason.” Whipple said, “Dart Container started out as more of a general machinery kind of company and they worked their way into Styrofoam cups … obviously they hit it really well, they’re probably the biggest Styrofoam cup maker in the world, you can go anywhere in the world and tip a (Styrofoam) cup over and it says Mason, Michigan on it because they’re Dart cups and they make almost all of them here.”

Having a company as big as Dart Container Corporation is a big stepping stone to growing a city such as Mason.

Associate Professor of Community Development at Covenant College, Russell Mask said it can create driving wage jobs to bring more people to that city will help the city if they decide to buy a house and pay property wages which can help the city provide better services for the residents.

Waltz said, “It helps the people in Mason support their families, impacts the housing market where many of the employees live in the Mason area and as we’ve grow we’ve seen the housing come along with many neighborhoods. Also many of the employees consume goods and services in the area by grocery shopping or just grabbing a bit to eat which can really help the local business here as well.”

In cities that have larger companies it can sometimes be a challenge to deal with all the people coming in and out.

Mask said, new jobs mean new people and that could lead to new construction especially on the roads, can cost more on schools with an increase in more children, but it is certainly not the case everywhere.

With over 1,000 customers around the world, Dart Container Corporation serves for hospitals, universities, schools and many local businesses, said Waltz. While not everyone may use Dart Container Corporation’s services, residents certainly understand what they’ve done for the community.

Mason resident Shaun Sherwood said, “I don’t ever go there or use them for anything … I don’t use Styrofoam cups, I try to use glass products but I know they’re there and I know they’re big in our community and they’ve brought a lot of jobs and it’s really kind of helped our community a lot.”

Dart Container Corporation has done a number of great things to the Mason and Ingham County area in terms of donations, said Waltz.

“We have a long history of employees donating time to things such as Relay For Life and bake sales. We donated the land where the Angel House is … we’ve done many product donations for school related events by bringing in cups, plates and silverware for them to use, we sponsor the Ingham County Fair … also very charitable as Dart Container has donated around $55 million to the Dart foundation and we’ve also donated hundreds of thousands of dollars to the Mason Schools so that they can bring in new tablets and laptops for all the kids to have during the school year.” Being generous outside the office is a key to a successful business as is keeping a safe and friendly work environment.

Dart Container Corporation employee Collin Martin said, “It’s a very family friendly company, it’s privately owned so they value like family values. The management style is different from any other company that I’ve worked at, the management’s not like held to a higher standard then everyone else, there’s just like an equal playing field so that really, I think, drives the atmosphere around here…I worked for Budweiser in Jackson and that was a family company too but the upper management held themselves to a higher standard so they wouldn’t do certain tasks. Here say Bob Dart comes in, he’ll still sign in, get a guest pass like everybody else.”

When a business is started by a family it takes a lot of hard work to make it successful, but it also requires communication between all the family members to make sure everyone is happy and getting along.

Family business expert at The Family Business Consulting Group, Drew Mendoza said, “You need to make sure you keep everyone happy because anyone can try to sell if they don’t get along. Your job as a CEO is to grow the business and ask what are our expected growth risk profitability and liquidity.” A business doesn’t become a family business until ownership is passed down a generation and maintaining a family relationship for future generations to run the company for years to come is critical, Mendoza said.

“You need to inform the in-laws what is happening with the company in the future because the children could be the new owners after they go to college and learn how to run a business, especially through the financial aspect. Keeping a family relationship is key by going on vacation and looking out for one another. You also need a well functioned board of directors surrounded by experts who can support one another but can also tell if the stuff they purchase is good or bad.”