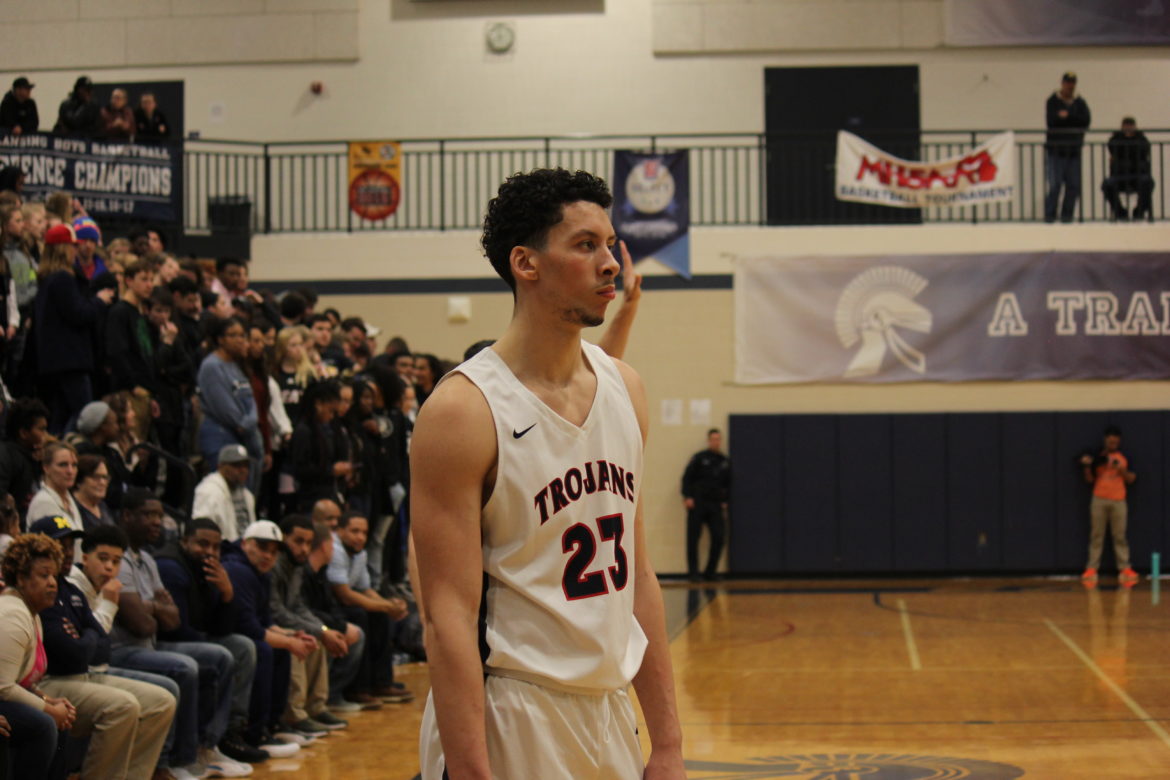 Most people who closely follow college basketball recruiting might have thought a top basketball prospect born and raised in Lansing  would choose to stay home and play under Tom Izzo at Michigan State University.

But Brandon Johns, a 6-foot-8 small forward at East Lansing High School, had other plans.

Johns loves his hometown, but he decided to commit to the University of Michigan. It was the path he wanted to take.

John said Michigan State’s program wasn’t lacking anything. He had a lot of respect for MSU’s coaching staff and university as whole, but said he felt like there was a “better opportunity” in Ann Arbor.

Michigan head coach John Beilein is getting a special kid and fantastic teammate, according to Brandon’s coaches.

“He is a phenomenal athlete, a phenomenal player and really understands the game,” said East Lansing assistant coach Sean McKinney, a senior at Michigan State University. “More than all, he is a really great person.”

The coaching staff for the Trojans will miss a kid like Johns, and the Michigan Wolverines should love to have him, McKinney. Listen to McKinney talk about Johns

John’s said his role on the Wolverines team next year will be similar to what his role is now at East Lansing: to be a scoring and versatile big man. This will give the Wolverines depth in the forward position next season if the team loses junior forward, Moritz Wagner, who is expected to declare for the NBA Draft.

Johns said he is ready to tackle Michigan basketball next season. Johns giving last minute instructions to the starting line up

Johns said he is excited about his future in basketball on and off the court. He said he just wants to “do his thing” in high school as well as college. East Lansing ended its season in a 58-55 quarter final loss to West Ottawa in March.

Johns — who was a finalist for the state’s Mr. Basketball award and was ranked No. 58 in ESPN’s list of top basketball recruits — said he wants basketball to take him “as far as it can.”

“In high school I want to be remembered here in some way or somehow — make a statement here,” Johns said. “In college I want to work as hard as I can to be the best I can be, try to have basketball take me as far as it can. My overall goal I guess is just to do my thing keep working, get better, keep progressing and become a better person in the process.” East Lansing senior Brandon Johns laughs with his teammates while he stretches before a game.