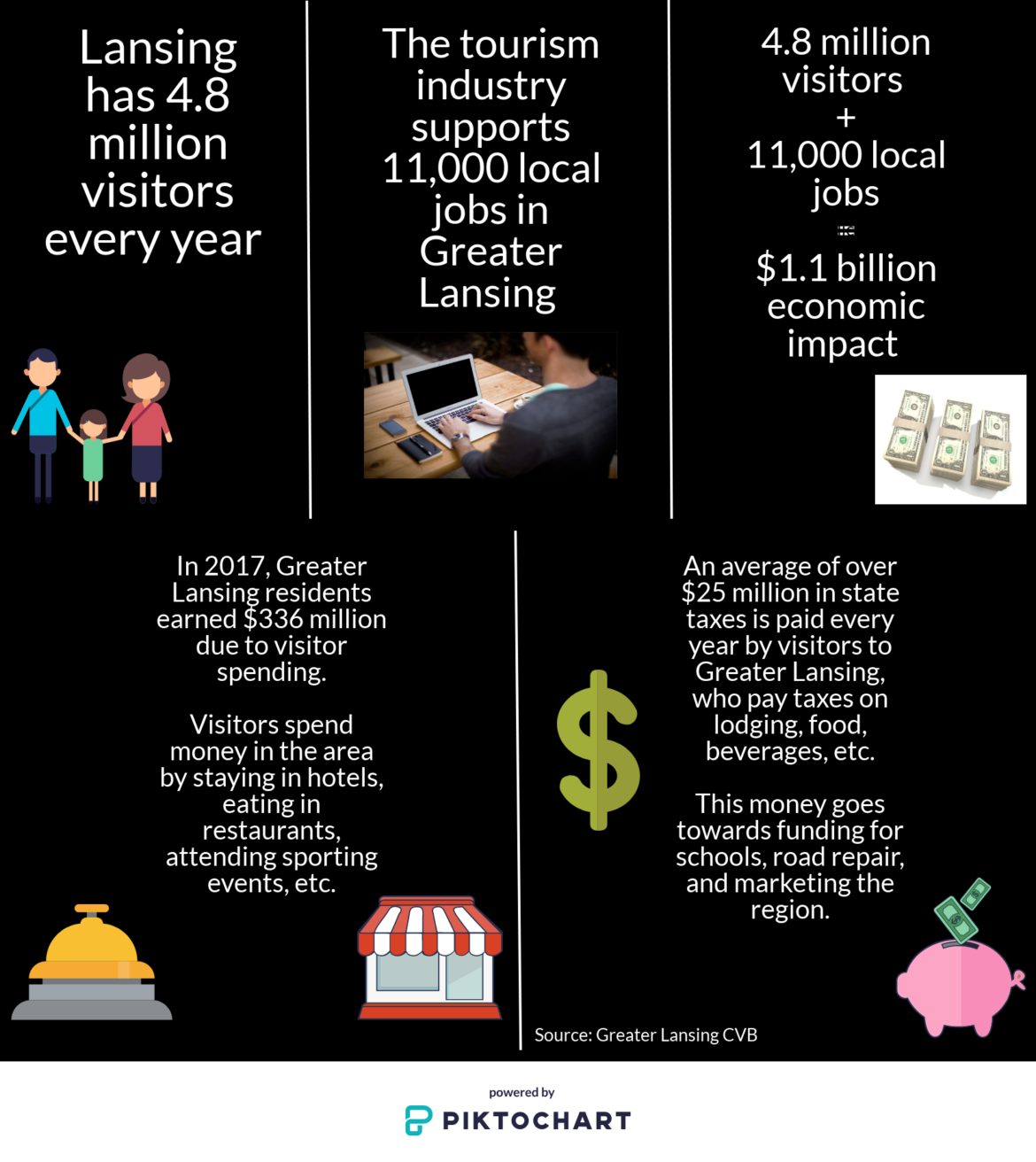 When it comes to tourism, you would think Lansing wouldn’t be too high on most people’s list of places to visit. Unlike popular tourist destinations like Los Angeles and Miami, Lansing isn’t that big. According to the 2016 U.S. Census, Lansing’s population doesn’t even exceed 120,000 people.

One could argue that if it weren’t for Lansing being Michigan’s capital city and home to Michigan State University, the city would be relatively unknown. But despite all of this, the mitten state’s capital city still sees its fare share of visitors.

Lansing gets 4.8 million visitors every year. When you add that number to the 11,000 local jobs in the Greater Lansing area that are supported by the tourism industry, it equates out to an annual economic impact of over one billion dollars, according to the Greater Lansing Conventions and Visitors Bureau (CVB).

“We probably have around 250 people flying in to Lansing everyday,” said Debbie Feeley, gate agent for Delta Airlines at Capital Region International Airport in Lansing.

Here’s an in-depth look at the importance of tourism to the Lansing community.

The result from that was a revenue intake of almost 7 million dollars and an economic impact of over 65 million dollars just from the Lansing Center alone in 2017. According to the Greater Lansing CVB, visitors to Lansing last year used over one million hotel guest rooms. Lansing’s annual ShutoCon anime convention has thousands of attendees every year, and brings many outside visitors to the region.

Brendan Dwyer, manager of marketing communications at the Greater Lansing CVB, said ShutoCon has an enormous economic impact on the Radisson and other hotels in the Lansing area.

“When you consider the amount of guest rooms in the Radisson, that event fills up that hotel and several others? in the region,” Dwyer said. “When those visitors come into town for those big events they spend a lot of money, and that’s ultimately the goal.”

Sarah Dysinger, sales coordinator at the Radisson, said the hotel doesn’t always host conventions as large as ShutoCon, but that is offset by the high number of smaller events held throughout the course of a calendar year.

“We do a large mixture of different kinds of events. We do conventions, we do conferences, we do weddings. So we pretty much have something going on every weekend,” Dysinger said.

Dysinger said a large portion of the revenue generated by the Radisson is due to associations or groups who travel into Lansing to hold conventions and events.

“A lot of our business is event-based and group-based. The larger conventions bring in quite a lot of overnight guests, so that takes up quite a bit of our hotels,” Dysinger said.

While Lansing gets visitors of all types, it isn’t a typical tourist destination. Unlike cities such as Orlando or Chicago, that have popular places of interest travelers can visit, tourism in Lansing isn’t largely predicated on transient visitors or short-term vacationers.

“We do have the transient vacationers and stuff but not as large as a portion of our hotel is taken up by them, it’s quite a bit of business travel and groups,” Dysinger said.

The hotel industry plays a huge role in generating revenue in the Greater Lansing area, despite the city not having a lot of high-end, luxury hotels that one would normally find in a larger city.

“If you really think about the type of hotels that are in the Lansing area, just looking at those hotels it kind of gives a profile of the type of market it is,” Singh said. “We really don’t have any luxury hotels because Lansing doesn’t support that market. The highest level in terms of scale we probably go up to is maybe a four-star hotel, so you would think of the Marriott in East Lansing, or the Radisson or the Kellogg.” What makes Lansing a tourist attraction?

The statistics clearly indicate that Lansing is an adequate destination for visitors. So what is it about Lansing that allows the city to attract so many visitors?

Jim Edelman and Tom Daldin, host and producer of the Emmy-award winning PBS show, Under the Radar Michigan, both said they believe one of the main reasons why Lansing’s tourism industry is booming is due to it being the capital city of Michigan.

“Obviously for Lansing, it’s the state government. It brings a lot of people who come in to see the state capital and to see monuments. I went there with my folks when I was a kid, so that’s big driver of tourism there,” Daldin said.

Since Under the Radar Michigan’s series premiere in 2010, Daldin and Edelman have explored cities all over Michigan, including Lansing. Edelman, who visited the state capitol building for the first time when the show first featured Lansing, said he believes capital cities are tourist destinations for vacationing families.

“I think there’s a whole subsect of the population – that’s part of the summer vacations with the kids, especially in a driving culture. You hit these states and you hit all the capitals,” Edelman said. Lansing’s Home & Garden Show in March had over 20,000 attendees over a four day period.

Another large tourism driver in Lansing is Michigan State University. The university brings thousands of students into the Lansing area, and when parents travel in to visit their kids, they are spending money in the city by eating in restaurants, staying in hotels, etc.

Daldin said the presence of Michigan State University has aided the development of downtown Lansing over the years and has made the area more vibrant due to the amount of young people the university attracts.

“The fact that there’s a major university right there also lets a lot of creative energy and forward motion to that area,” Daldin said. “A lot of young people, as you know, are connecting with cities in downtown, so there’s a real vibrancy that is happening now in downtown Lansing because of the young people that are doing that and because of the university that is there.”

The impact the 4.8 million annual visitors to Greater Lansing has on large businesses including the Lansing Center and the Radisson Hotel is evident in the millions of dollars they generate yearly solely due to tourism. But Edelman said that impact is felt by smaller businesses in Lansing as well.

“One of the things that amazes me is – we’ve been on the air for eight years, and it’s seen the businesses that we featured early on change and morph and grow,” Edelman said.