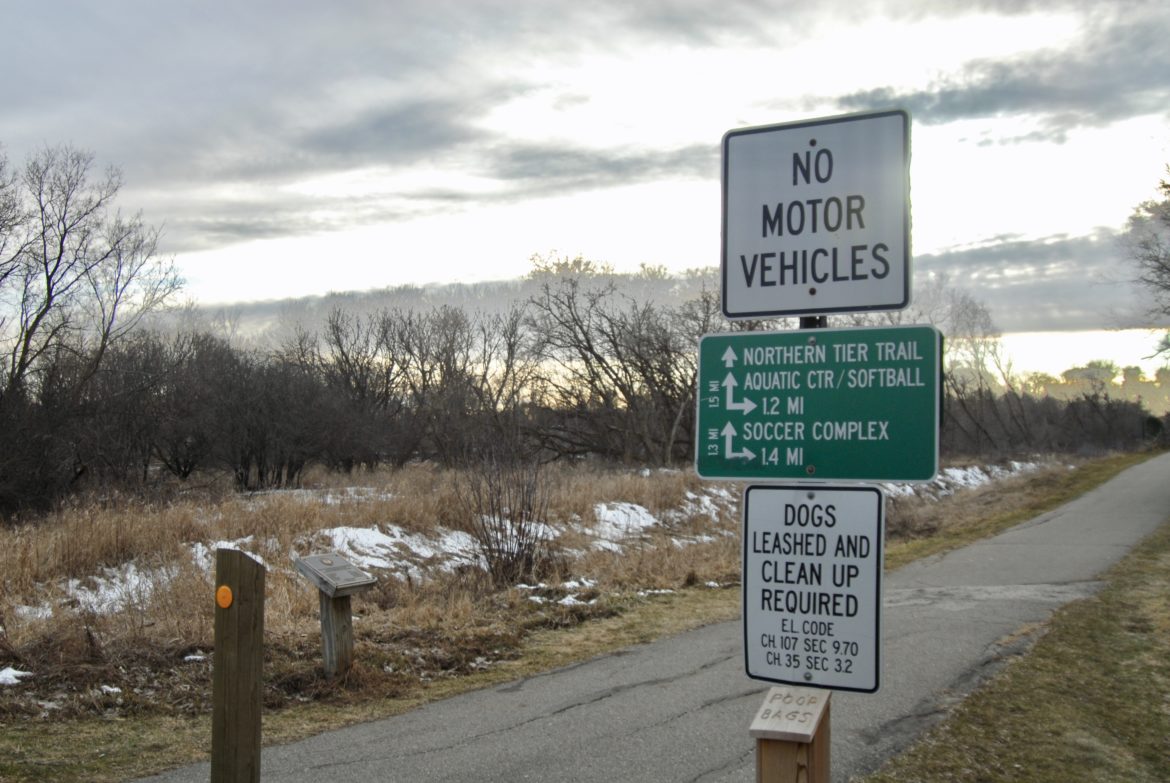 Kacie Kefgen brings her kids to Harrison Meadows Neighborhood Park almost every day and runs nearby trails three times a week. Kefgen, who lives in a neighborhood near Northern Tier Trail, is one of many East Lansing residents who regularly take advantage of park and recreation sites in East Lansing. “We can see how many people use the trail from our house,” said Kefgen. “Even in the cold part of the winter, especially on the weekends, you will see people running and walking their dogs.”

While many residents enjoy the local parks and trail systems, maintenance of these areas is a shared responsibility.

According to Tim McCaffrey, director of the East Lansing Department of Parks, Recreation & Arts, the majority of park maintenance is the responsibility of the city organization, but volunteer work plays an important role.

“We work real closely, in fact, the city organization spearheads volunteer efforts with some members of our community,” said McCaffrey.

Volunteer efforts include workdays organized through the Environmental Stewardship Program that seek to promote greater community involvement in park upkeep and restoration.

“We restore the natural areas to what we envision, based on history and satellite images and whatnot, that they used to be,” said Heather Surface, the environmental stewardship coordinator for East Lansing.

Charles Nelson, a community sustainability professor at Michigan State University who specializes in park and recreation resources, said that aside from financial and maintenance benefits to the city, park volunteer work can benefit local residents. According to Nelson, healthy community volunteer programs adapt to each volunteer’s needs and capabilities and gives them a sense of ownership.

“You don’t give volunteers the worst jobs you can think of,” said Nelson. “You give them things that fit their needs and what they have to offer you.”

Surface also said that workdays allow residents to feel greater ownership of local parks and develop an understanding for how parks function. Surface said around nine people attended the most recent community volunteer workday at White Park on March 10, although the number of participants fluctuates from month to month. A pile of brush cleared at White Park.

Anna Herklotz, who has lived in a neighborhood near White Park for ten years, said she has not participated in the park volunteer program, but plans to lend a hand this year in clearing out invasive species at White Park.

“I’m a big walker,” said Herklotz. “So I love that this place is here.”

According to McCaffrey and Surface, community volunteer work in local parks primarily consists of clearing out invasive species.

“The definition of an invasive species is that it is non-native and also that its introduction is causing or is likely to cause harm, whether it’s to the environment or to the economy or to human health,” said Erin Pavloski, a regional invasive species coordinator for the Ingham Conservation District.

According to McCaffrey, East Lansing has worked to create several inventories of local parks detailing invasive species and improvement plans.

“We’ve decided that over a period of time, we’re going to attempt to really do some clearing of invasive species and do our best to try to bring in native type of growth in those natural areas,” said McCaffrey. Many of these improvements are being funded by alternative funding and grants, such as the Michigan Natural Resources Trust Fund, which has provided East Lansing with over $2.5 million toward local parks within the past two decades.

Amid recent discussions of potential budget cuts for the city of East Lansing, measures to reduce city funding for park maintenance programs have been discussed.

“As far as budget cuts go, the city organization has continued to reduce its labor workforce and one of the things that we’ve attempted to do as we continue to reduce our workforce and even as we experience budget cuts for park maintenance, we’ve looked for alternative ways to get things done and one of them is park stewardship, which is a volunteer program,” said McCaffrey.

According to McCaffrey, proposed cuts for the 2019 fiscal year would not significantly reduce park maintenance funding, but that could change come 2020. “It’s going to be a tough set of choices for us as a community to figure out what we’re willing to cut back on until we can figure out the revenue side,” said Kefgen. “There are no good perfect solutions.”

According to Herklotz, if budget cuts increased the need for community stewardship in local parks, many residents would step up to the plate.

“I’m sure volunteering would increase and I think there would be a pretty strong presence of it in this particular neighborhood because people are committed,” said Herklotz.

Although volunteers from the community can only do so much, Nelson said community efforts to maintain parks are always important.

“If you think about your local park and recreation agency, if you volunteer with them, they will find a good spot for you,” said Nelson. “And indeed, every volunteer helps.”