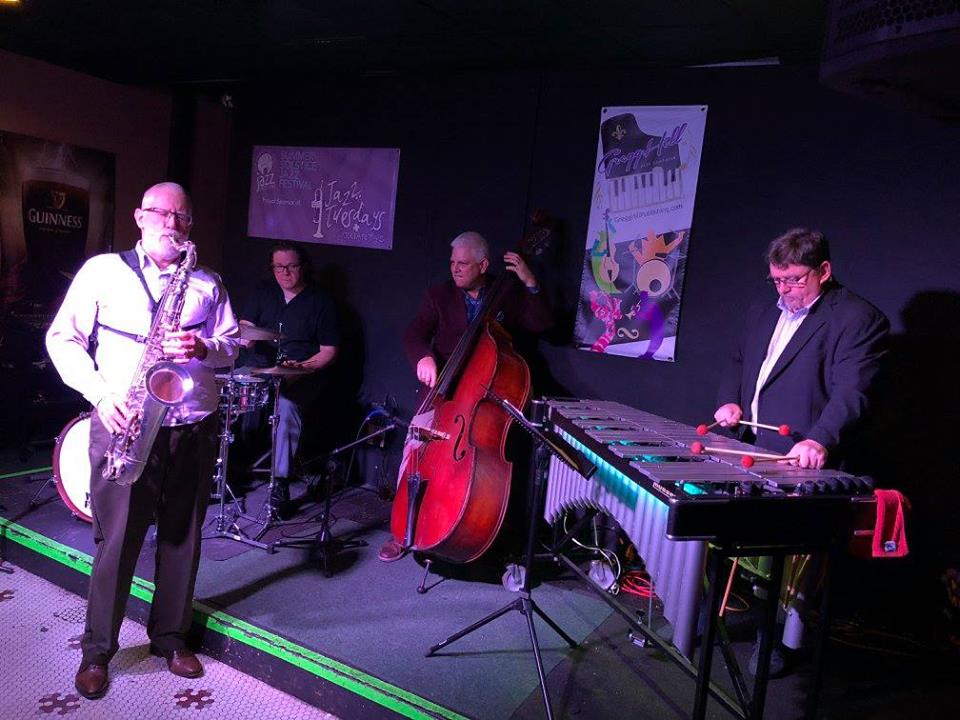 Got a case of the Tuesday blues? The Lansing-area music scene may hold the perfect antidote to get you out of your funk.

One popular Lansing venue for live-music pays tribute to one of the classic music genres every Tuesday night.

Moriarty’s Pub, better known as “Morts,” on the corner of East Michigan Avenue and South Homer street, hosts weekly “Jazz Tuesdays.” Acts from all over Michigan take the stage there.

“I don’t have an official position at Mort’s, but I’ve been hosting a jazz series there on Tuesdays for three and a half years,” said Jeff Shoup, who is also the resident drummer on Tuesdays. “It’s been a runaway success.”

The venue focuses on jazz standards, while “throwing in some funky ‘soul jazz’ for good measure,” he said.

Shoup hosts the show, books the acts and plays drums with the guest artists. A typical Tuesday scene at Moriarty’s, as guest fill the pub for live jazz. In the audience is Gregg Hill (far right), a primary sponsor of Jazz Tuesdays.

“From the musician’s perspective, we’re trying to create a mood and a vibe,” he said. “We try to draw the audience into our performance.”

Sandra Billingsley, a former DeWitt resident, enjoys the intimacy of the venue. Even now that she lives in Hastings, she travels more than an hour to attend Jazz Tuesday’s.

“Everyone there for the show is attentive and not too loud,” Billingsley said. “Not many places have live jazz anymore, so this is where it’s at. We even came all the way from Hastings last Valentine’s day.”

After the featured set, a “sit in” style jam session takes place during the second half of the evening, allowing musicians, including students, to intermingle on the stage.

“It is really fun and affords great networking opportunities,” said Ian Levine, a patron and drummer at Jazz Tuesdays. “I have met several musicians via the session with whom I have gone on to establish working relationships.”

After hearing about Moriarty’s from musician friends, Levine quickly got hooked on Jazz Tuesdays.

“I am a regular attendee,” he said. “Over the past four years, Jeff Shoup has built a close knit community of jazz players and patrons.” “It’s gone from being a jazz session of local interest to one that is now known regionally and that even attracts nationally recognized performers.”

“We really appreciate the support and couldn’t do it without them,” he said.