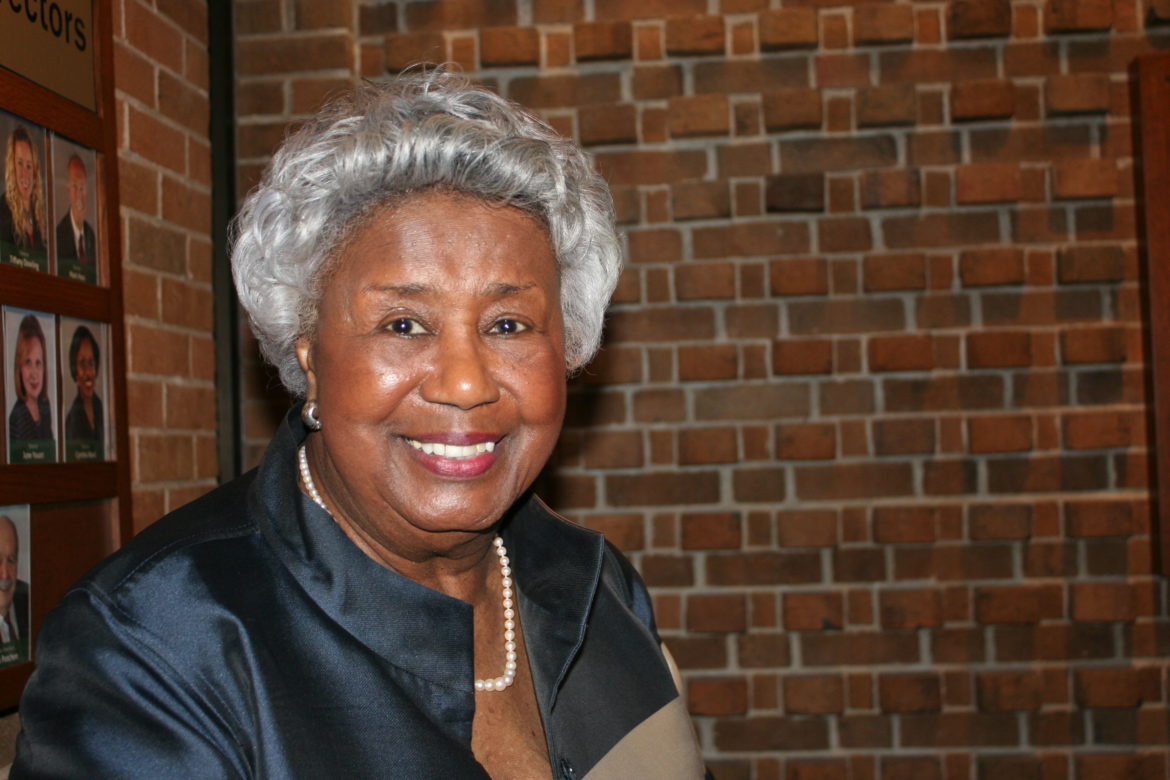 Dr. Eva Lois Evans was honored for the lasting legacy she will have on the Lansing School District.

The Lansing School District’s welcome center will soon embrace a new name in honor of a woman who dedicated much of her career to the capital city and its citizens.

Dr. Eva Lois Evans is being recognized for her leadership in the district and at a national level with Alpha Kappa Alpha—the first African American Greek sorority. Her most memorable work within the community ranged from her implementation of diverse educational programs, to her advocacy for the education of minority students.

Diana Rouse, an Alpha Kappa Alpha member and recent retiree, was one of two women asking that the district honor Evans at a school board meeting on Thursday, Feb. 8. Rouse, having invested more than 40 years in the Lansing School District, followed in Evans’s educational footsteps. She held many of the same positions in the district and said Evans’s influence played a major role in her own success as a leader in the community.

“She really took me under her wing,” Rouse said. “Now it’s kind of a philosophy I have, ‘each one, reach one.’ That’s what it’s all about, as far as giving back. It’s bringing up that next generation.”

Mia McNeil, who gave the presentation alongside Rouse, is Lansing’s Delta Tau Omega chapter president of Alpha Kappa Alpha. Evans’s work as the 24th international president of the sorority helped McNeil establish leadership tactics she continues to use.

When McNeil moved to Lansing to assume this position, she discovered that Evans—having earned her master’s and doctoral degrees from Michigan State University—was a member of the Delta Tau graduate chapter. McNeil said she finds the role additionally gratifying knowing the chapter she oversees is home to one of her mentors.

Why the Welcome Center? The welcome center is new to the district. The board defined it as a central location for students and families, offering information on programs and opportunities. The Lansing Welcome Center aims to unify the community.

Rouse and McNeil emphasized that they consider the Lansing Welcome Center the ideal location to bear Evans’s name. They said the center is a shining light in the community, which is only fitting for a woman who is “not only a pillar of this community, but a shining light of the state.”

While Evans holds many prestigious honors—she is a member of the Michigan Women’s Hall of Fame, an Athena Leadership Award-Winner, recipient of the Crystal Apple Award for the state of Michigan—this was a special honor.

“We all went through this process of trying to brainstorm what would best represent what Dr. Evans has been to this community.” McNeil said. “We all figured that anything dealing with education, or the arts or giving back to the community is something that she would likely want to see her name on. So, we are crossing our fingers, as we have an excellent opportunity here to do just that.”

Others helped by Evans’s legacy

“When I’m involved in things, I never think about it as ‘leaving a legacy. But, in retrospect, it must.” — Dr. Eva Lois Evans.

Other women in the room said they had been moved by Evans’s work. Yvonne Caamal Canul, superintendent of the Lansing School District, sat on the board during the presentation. She listened as McNeil and Rouse described a woman who was not only their  companion, but a woman to whom Canul said she had her own emotional attachment.

“I mean, if you look in the history of women mentors that you’ve had, as a woman in a leadership position, she’s like right at the top of my list. My mom, then Dr. Evans,”  Canul said.

Coming to the district as a teacher in 1974, Canul recalled working alongside Evans on numerous occasions. She watched as Evans played an essential role in the start-up of diverse programs and in the creation of collaborative centers for educational partnership and communication. Canul’s own mentor was a leader to many. Canul said that when she was informed of Alpha Kappa Alpha’s intentions, her response was one of immediate agreement. In the eyes of Canul, alongside others like McNeil and Rouse, this was the highest tribute they could muster for a woman they felt merited the utmost appreciation.

The board approved Alpha Kappa Alpha’s request, and on Wednesday, April 4, the welcome center’s current name will be no more.

Evans said she was surprised and grateful to learn that she would be honored in such a unique way.

Evans will remain permanently present in the heart of Lansing. To all that knew her, they seemed to agree that’s where she belonged.