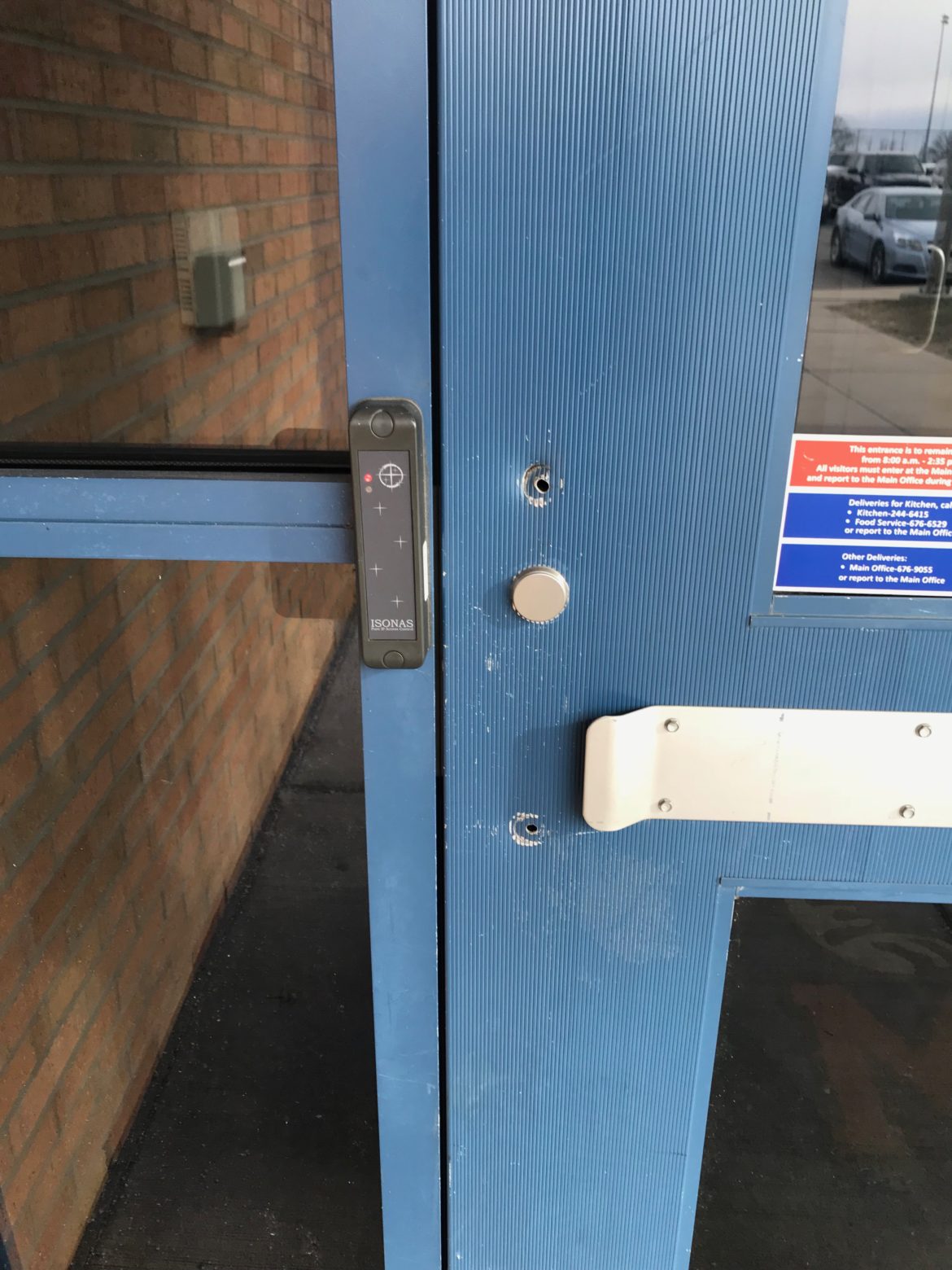 Key scan on the doors outside of the Mason High School that allows you access to the building. Photo by Ian Kress.

What seems like an increase in school violence attacks may not be the case due to the media but that still hasn’t stopped schools in Mason from protecting the students.

While Mason has had a few instances where precautionary measures were needed to be taken, the six schools have never had to deal with anything serious like what happened in Florida, said Superintendent of Mason Public Schools Ronald Drzewicki.

Parents are always going to show concern for their children, especially at school when there are so many other students. With the schools protected, the staff is talking with the students on what to do in any situation instead of spending more money for protection.

Mason Police Officer Jeremiah Budd, the school’s contact officer said, “It would be a long process to redue the security … it all boils down to funding, it could cost thousands even millions to bring in metal security detectors. We do weekly checks of each school, have security access key scanners and haven’t had any big problems.” Key scan on the doors outside of the Mason High School that allows you access to the building. Photo by Ian Kress.

Michael Dorn, expert in school safety at Safe Havens International said, “School districts are spending $45,000 on training for kindergartners and it hasn’t proven that it works with many injuries… people with training actually perform worse than those without training.”

Drzewicki said, “Our parents are always concerned about the safety, we’ve made an effort to reach out and have a talk with the kids about reporting anything and make sure they don’t say anything that could get steered the wrong way by someone who overhears what they say.”

The schools are going to make sure the students can protect themselves but sometimes parents are the ones explaining what to do in a severe situation.

A Mason resident, who asked that their name not be mentioned to protect the identity of themselves and the family, has two kids in Mason Public Schools one in elementary school and another in middle school said, “I talk to my kids about being safe and we even talked the other day about an active shooter, if something happens you try to take cover, listen to the teacher, but ultimately you gotta make sure you know what cover is. Something that provides ballistic coverage so you can’t take any you know shrapnel or like a stray round, hide underneath a table, flip it over, like an interior closet something like that.”

The recent school shootings have caught the country’s eye in a big way but it’s not something new as it’s always been happening and used to happen more.

Dorn said, “Basically we’ve had shootings since 1891, there was just no media … there was twice as many in 1970 from 1992 as there are now and we have more students in K-12 now. Israel is the only place with safer schools and the picture in the U.S. isn’t true.” Teachers are the ones in charge of a classroom and if something were to happen they would be the ones protecting the students. That brings the question up to whether or not they should be allowed to carry a gun.

“It’s not typical a recommendation in the U.S. … very few suggest that be an option but if someone is shooting and you can stop the bad guys without hitting innocent people then it might be an option,” said Dorn.

Said Budd: “I think it’s a great idea, I know a lot are against it, personally if someone was thinking about acting out and then become aware that teachers could be carrying a gun then that might stop them … It shouldn’t be required because to protect everyone is a big responsibility with students and other faculty in the area.”

The same Mason resident who asked that their name not be mentioned said, “Absolutely, with the right training on a voluntary basis … the teachers have to want to and I think there should be some advance training, maybe a screening process and make sure the teachers are totally prepared to carry and they’re willing too.” Map of Mason High School and Mason Middle School. The middle School is 1.1 miles from the police station. Photo from Google Maps by Ian Kress.

School attacks in many cases are a result of people feeling suicide effects as most planned attacks are from people with high risk for suicide, Dorn said, one of the best ways to prevent these is to look for any behavioral patterns in students and talk with them to see if anything is going on especially at home, parents fighting or a death in the family can result in these actions. Map of The Mason police department and Mason High School. The distance between the two is 0.9 miles. Photo via Google Maps by Ian Kress.