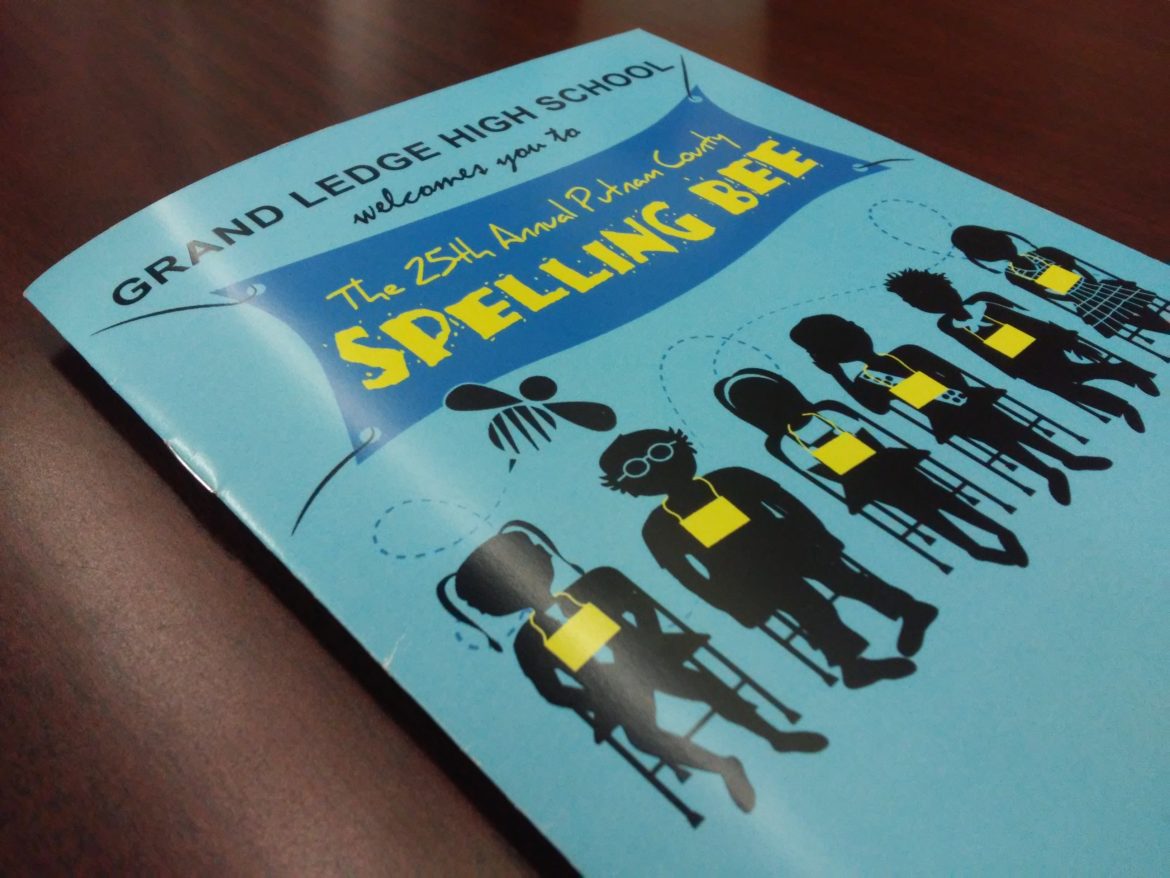 A program for "The 25th Annual Putnam County Spelling Bee," which ran at Grand Ledge High School from March 22 to March 25.

Students participated in multiple performances of “The 25th Annual Putnam County Spelling Bee,” which ran from March 22 to March 25. The PG-13 musical comedy, conceived by Rebecca Feldman, saw a Broadway run in 2005. In the show, “An eclectic group of six mid-pubescents vie for the spelling championship of a lifetime,” according to the school’s Grand Ledge Musicals website. Before its run at Grand Ledge High School, “The 25th Annual Putnam County Spelling Bee” was originally conceived by Rebecca Feldman, with music and lyrics by William Finn.

Tonya Rice, producer of “The 25th Annual Putnam County Spelling Bee,” said that the process of putting on such a production is complex and time-consuming.

“First of all, they have to get the licensing, and then they start putting out the parts so the kids figure out who wants to be in it, and then there’s all the auditions and the practices,” Rice said. “The director handles all of that.”

As a producer, Rice oversees multiple aspects of the production alongside director Tracy Clark and several other staff members. Many of the parents of the student performers assist them.

“On my end, I have to make sure that the auditorium’s set and we have parents ready to come and help us,” Rice said. “The concessions and the program are kind of a big deal, putting that all together, and making sure tickets are done.” Outside of the Grand Ledge High School auditorium, banners with the names of fictitious spellers from Putnam County’s previous spelling bees line the wall.

Sherri Irwin, mother of show cast member Justin Irwin, said that the theater productions required a lot of dedication from her son.

“Four days a week, and he also is in swim,” Irwin said. “So that’s on top of it, then grades and schoolwork, so he’s very busy.”

Irwin said that the process is ultimately worth it, especially since the students receive a lot of support from their parents and teachers.

“They have a great producer and the music teacher – they’re very involved and they dedicate a lot of their time putting this together,” Irwin said. “A lot of the parents do too, with building the sets and trying to make it economical for the production.”

Rice said that these productions occur semi-annually, with a larger production in the fall and a smaller one in the spring. Rice also said that “The 25th Annual Putnam County Spelling Bee” was especially unique in that it had numerous elements of improvisation work.

“Probably like, 20 to 30 percent of it is improv,” Rice said. “Every time I listen or watch, there’s something different. And the words are different – like every night, there’s totally different ones. Each cast has their own little take on things.”

The improv portion of the show, which also uses participation from members of its audience, was a highlight for several attendees.

“I think they did a great job at the improv and making up some of the lines,” Irwin said.

Grand Ledge High School student Emma Rodeman said that the play’s notorious reputation for being humorous made her interested in it in the first place.

“My teacher does costume for it and she said it was really funny,” Rodeman said. “She told us a couple of jokes and I was like, ‘I’m in.’”

“I wanted to see my friend,” Karianne said. “I’ve never heard of it, but I heard it was funny.” Inside the Grand Ledge High School auditorium, viewers wait for the show to begin.

Rice, who’s been part of Grand Ledge High School theater department for five years, said that she has seen numerous theatrical productions come to a close. She described what that feeling was like and how the spring production acts almost as a send-off to graduating musical theater students.

“They usually hang out together and they’re all smiling and they’re hugging and it takes a long time to leave, to go home, ‘cause they’re wanting to stay and be together,” Rice said. “For seniors, it’s their last show. So they spend a lot of time before the show and after the show – kind of like a family.”