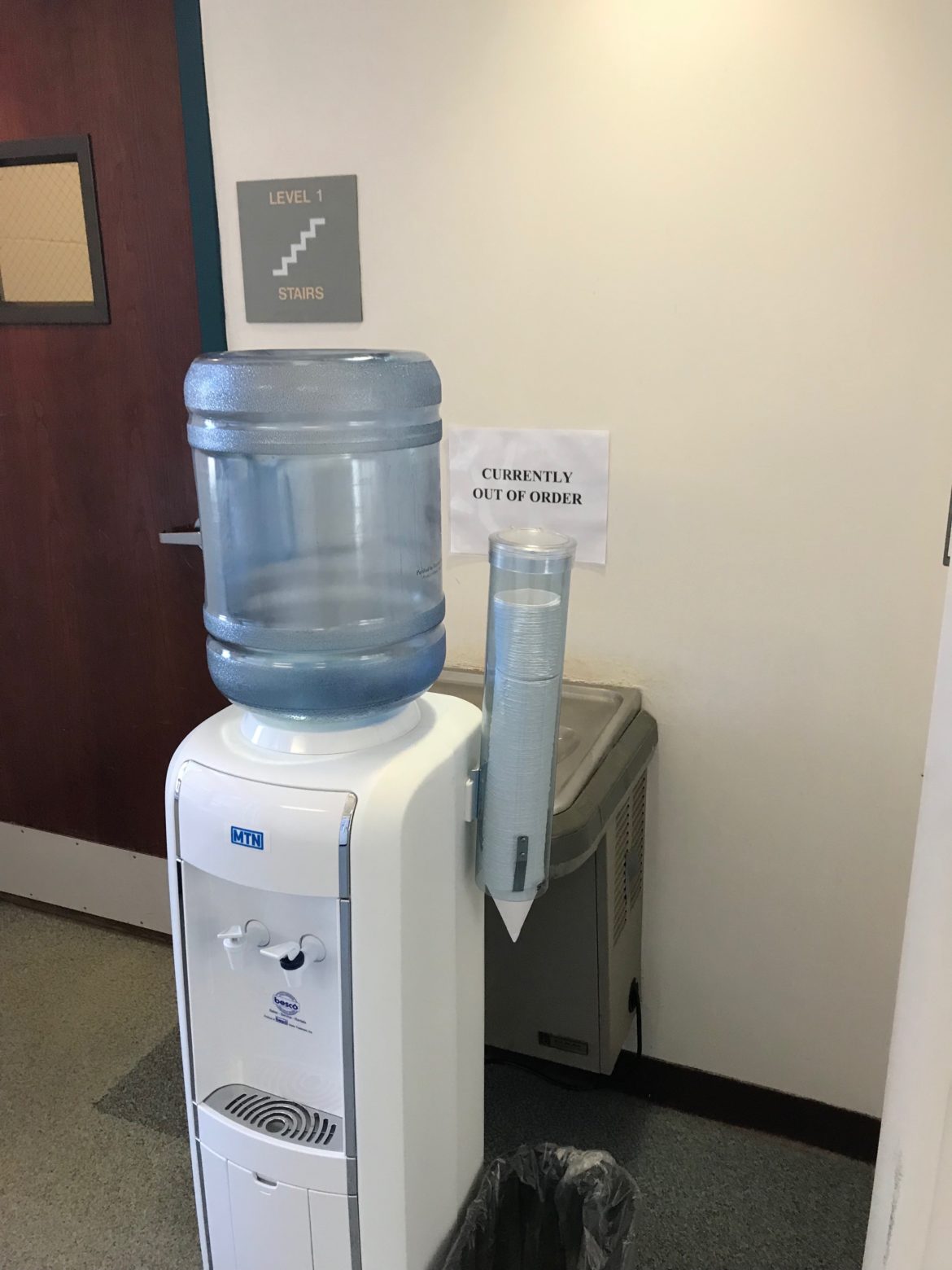 Water cooler in the Hilliard Building blocking access to the water fountain after elevated copper levels were found in water. Photo by Ian Kress

After recent tests, a few Ingham County government facilities have found elevated levels of copper in the water. All of the buildings are located in Mason.

The Hilliard Building, Ingham County Courthouse and Ingham County Jail all tested for elevated levels of copper in their water. But in the jail’s case, depending on the test, some were high and some were low, said Mason City Administrator Deborah Stuart. Ingham County Courthouse is the biggest landmark in the city of Mason. Photo by Ian Kress.

The buildings weren’t forced to test the water, but acted wisely to make sure the quality was up to par.

“Just to be clear, none of their tests are required so it’s not a compliance issue, it’s that they were proactively testing to determine what their water quality was,” Stuart said. “The challenge is, we’ve tested the water going into the building and there’s no copper … so it’s an issue within the facility.”

Thomas Voice, expert in environmental contamination, water treatment and industrial waste at Michigan State University said, “Copper can elevate in the water due to the plumbing copper pipes the water flows through and when it sits in place to long.”

A key problem that can lead to elevated levels of copper is the water sitting in the pipes for too long and not being used enough, so it’s recommended to run the water first before they are used.

“We recommend people run the water, if it’s not sitting all day then it’s not a big problem,” said a health officer at Ingham County Health Department, Linda Vail. Stuart said, “A year ago, the school tested high in copper and they ended up switching out a lot of their fixtures, drinking fountains into different types of drinking fountains and they ended up doing some flushing of water on Mondays because the building sits empty for the weekend and they’ve been able to manage it with out any high copper testing.”

Rick Terrill, facilities director for Ingham County and works in the Hilliard Building on East Maple in Mason said,”Typically the direction it’s been given is that you run it for 30 to 60 seconds and that gets the water through the lines and the levels were below the action level when you did that.”

According to Vail and according to Minnesota Department of Health, action level is required if the level of copper is larger than 1,300 micrograms per liter in ten percent of tap water.

Stuart said, “What we’re finding is that it’s a lot of what we believe are facility issues and so water is sitting too long in the pipes, they’re not getting used enough. For example, a lot of water fountains aren’t used as much any more and so when you pull the water at the beginning, its been sitting in that water fountain for a long time which has a lot of copper.”

Just to be safe, the county buildings have taken a safe approach to avoid people from drinking the water and have placed water coolers in front of them instead.

“As a precautionary measure we brought in water coolers until we can work with the health department and determine a long term solution… we have them on all three floors in this building, we have them at the Mason courthouse and the other facilities here in Mason that the county owns,” Terrill said. Water cooler in the Hilliard Building blocking access to the water fountain after elevated copper levels were found in water. Photo by Ian Kress.

Despite the elevated levels, copper isn’t a big threat to the human body and is actually a required mineral.

Copper is required in the human diet and as long as you aren’t drinking it all the time can benefit from a little bit of it, Vail said.

Stuart said, “Copper is nothing like lead, we’re talking about potential stomach ache, things like that if you were drinking a lot of it. It’s not permanent damage… it’s just if you get a lot in your stomach and most people aren’t drinking the first glass of water from every drinking fountain.”

This isn’t something that has been a big problem before but a big reason for that is, the facilities didn’t need to test for copper in the past.