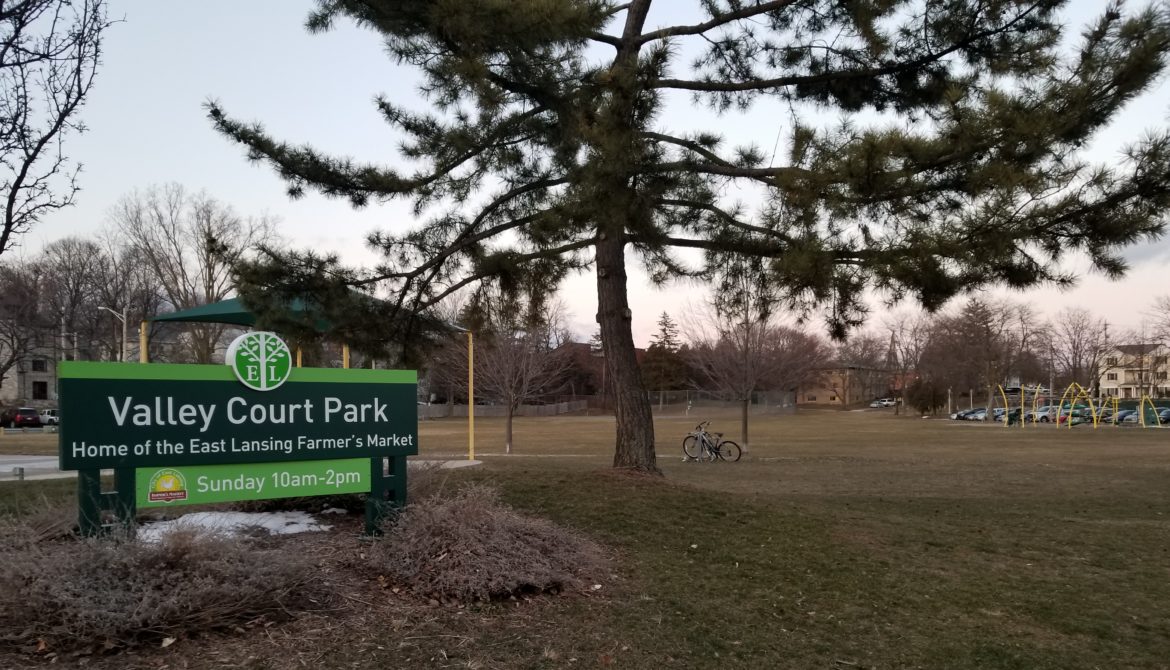 Valley Court Park where the East Lansing Farmers Market will take place during the summer and the fall.

The East Lansing Farmer’s Market is a government-run entity that has had issues with religious groups and organizations in the past. “I don’t know if you want to go as far as to say there was a church spiritual function as opposed to a public function. They were representing the church vs/ the general public. What we’ve tried to do in situations of that nature is have honor. I mean, I don’t see it as a church and state issue,” said Tim McCaffrey, the director of the City of East Lansing Department of Parks, Recreation & Arts.

Separation of church and state is a right that is given to all who live in the United States by the 1st Amendment in the Bill of Rights.

The full text of the 1st Amendment to the United States Constitution which present the idea of separation of church and state. Graphic: Andy K. Hahn via Google Docs.

“Well, so today it’s almost that that term (separation of church and state) is not really used very much anymore in terms of court opinions,” said Frank Ravitch, professor of law at Michigan State University and Walter H. Stowers Chair of Law and Religion. “They used to talk about separation of church and state as being a high an impregnable law, but that has really changed since the 1980’s and 90’s; it’s really an issue by issue question. In some areas like school prayer there’s still a pretty strong wall of separation. In other areas like government aid there really isn’t (any separation).

The term separation of church and state has lost some of its merit and is interpreted in a different way then it used to be.

“So I would say to define it i would have to say its kind of a contextual law its a law that’s level depends on the context in which it is being applied, but its really not it’s more of a metaphor that is used in common discussion then it is a real legal term.”

“The situation is really complex there is three different possibilities there, one is that you look at the federal free exercise clause which is not a church state element. It is the freedom to practice your religion free from governmental interference,” said Ravitch. “They probably would lose under that because of a case called Employment Division v. Smith which says that if a law is generally applicable there’s no duty to decree an exception to it, and sense the towns anti discrimination policy is generally applicable they probably wouldn’t win that.”

Because the farmers market have not interfered with anyone’s freedom to practice their religion they have not violated the free exercise clause of the first amendment.

“So they would turn to the establishment clause, the problem there is that the city is not establishing any sort of religion they’re enforcing an anti discrimination provision that they have in there city policy. Now there is a questions as to whether or not it’s a proper enforcement and application of the anti discrimination provision, that’s an open question,” said Ravitch.

The arguments that can be made against the establishment clause vary case to case and from court to court what they will look at for different arguments so it depends on the court as to whether the argument is enough to open a case.

The farmer’s market opens June 3 and runs through Oct. 28. The market manager, Karla Forrest-Hewitt, said that the people who attend the farmer’s market are mainly families from in and around East Lansing that come to shop and browse the produce as well as to mingle with friends.

The farmer’s market has an average of 24 vendors whose produce varies from organic fruits and vegetables to other seasonal items, as well as organic meat vendors, fish vendors, bakeries, and a popsicle stand.