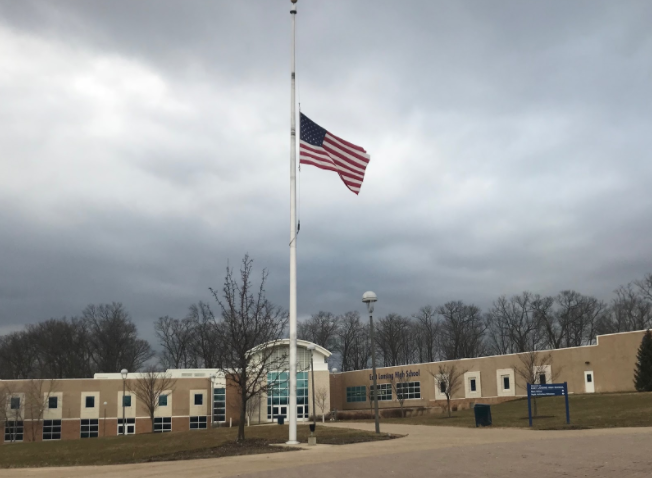 Flags were lowered on Feb. 15-19 in honor of Parkland shooting victims.

Students in East Lansing plan to stand up, or rather walk out, for what they believe in, and they hope the world watches.

March 14 marks one month since the mass shooting at Marjory Stoneman Douglas High School in Florida. To commemorate this, students in the East Lansing School District are planning a student-led walkout to protest for gun control. Flags were lowered on Feb. 15-19 in honor of Parkland shooting victims.

The walkout, according to East Lansing school board member Nell Kuhnmuench, will start at 10 a.m. and be 17 minutes long, one minute dedicated to each individual who lost their life in the Florida school shooting.

Kuhnmuench fully supports the student protest. She said she thinks young people play an important role in this issue.

“I think they have been far more articulate than most of us, and clearly Congress and others in power are not listening to adults,” said Kuhnmuench. “Maybe they’ll listen to the children.”

The high school walkout is being planned by the Students for Gender Equality and the Black Student Union school groups.

East Lansing High School student Danny Kaplowitz is one of the organizers. He said the students at ELHS, as well as students across the nation, are done being silent, and he hopes his country will listen.

“We are far too often the victims, and we, too, have a voice,” he said.“It is easy, too easy, for adults and lawmakers, who live lives far removed from these scenes of terror, to abdicate their duties in keeping us safe.”

“We will stand up and advocate for ourselves, for our lives and our right to feel safe in our country.”
— Student Danny Kaplowitz

MacDonald Middle School students plan to participate in this event as well. East Lansing parent Lisa Rutkowski has children participating at both the middle school and the high school. She said there is a parent organizer for the middle school’s walkout.

Though the protest is student-led, Superintendent Dori Leyko said she and the East Lansing Police Department are working with students to support their efforts and ensure safety throughout the event.

There are students choosing not to participate in the walkout, as well. Leyko said the school will provide an alternative for students who do not wish to participate.

Kaplowitz said he does not expect everyone in the East Lansing schools to agree with his perspective, but said he values the diversity of thought that opposing views bring. However, he also said he believes this message is one worth sharing.

Flags were lowered on Feb. 15-19 in memory of Parkland shooting victims.

Schools around the nation, are participating in a walkout on March 14, for 17 minutes in honor of the Parkland, Florida shooting and in protest of current gun laws. This prompted people to ask whether students, most of who are too young to vote, can lobby on Constitutional issues.

Dr. Terah Chambers, a school board member for East Lansing, said students could have the same impact as African-American student Barbara Johns, who led a similar walkout in 1951, which helped lead to the integration of schools in the Brown v. Board of Education Supreme Court decision.

“As a student you think like ‘oh who am I, I’m just one person’ but we have these examples of ordinary people doing extraordinary things because they felt passionately about it; you never know where the spirit of activism is going to take you.”
— Board Member Terah Chambers

Leyko and the board announced support in the Feb. 26 meeting for students and staff taking a part in the walkout.

Leyko said they understand the importance of providing the opportunity for students to let their voices be heard.

Kuhnmuench said she is drafting a resolution to oppose arming teachers in Michigan. That strategy was suggested in the wake of the Florida shootings. The board has adopted similar resolutions in the past, and in light of the recent school shootings she felt it would be a shame if East Lansing didn’t take a stand on the subject.

As part of its upgrade to several buildings, including Glencairn and Donley elementary schools, Leyko said security measures had already been budgeted as a top priority.

Emily Elderkin is a broadcast journalism major and Spanish minor at Michigan State University. She is proficient in Adobe applications such as Premiere, Lightroom, and Photoshop, as well as Final Cut Pro. She is also adept in many social media platforms. Her work has been published by the Spartan Newsroom and NBC affiliate in Grand Rapids WOOD TV8. She expects to graduate in 2020.

Shannon Line is a student journalist pursuing a career in broadcast and aspires to be a news anchor. Other broadcast interests include producing, editing and script writing. She has been on air since elementary school, but has become an active news reporter since high school. She is proficient in Adobe Photoshop and Premiere, and has produced with both Rundown Creator and Inception.