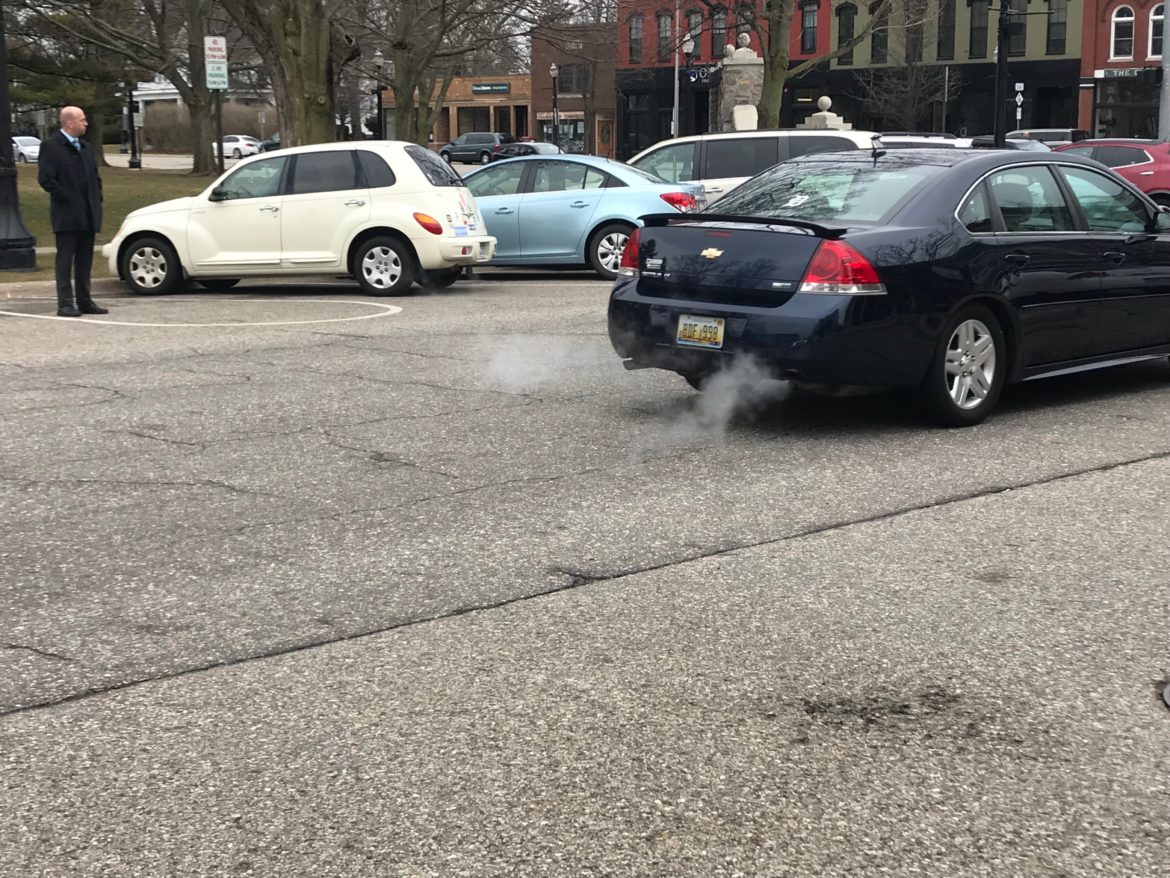 Car driving through Mason waits for car to pull out in front of them. Photo by Ian Kress

Parking in downtown Mason can be a struggle at times, especially in the summer with festivals the city holds. But mayor of Mason Russell Whipple said, “The best problem you can have is not enough parking.”

The downtown square has been a top attraction for Mason residents and as the city continues to grow, more people will be making their way downtown.

Mason resident Roger Arend said, “It’s busier than it was 50 years ago … more houses, more people, the streets are the same length, parks the same amount of cars with twice as many people so what’re you gonna do.”

The city has talked about the possibility of bringing in parking lots to downtown, but the issue with that is they would be used by employees. Whipple said, “The problem is the parking lots would be primarily used by employees, people that are going to park all day or for five to six hours, and that frees up some of these spots because they’re employees that park in these spots even though we only have a two hour parking limit … it’s kind of a double ended sword, if we come down here and start enforcing it hard and hit some customers then they don’t want to come to Mason anymore.”

Mason does have a couple lots for residents and employees to park downtown that are always available.

Downtown Mason brings in a lot of people with the businesses, but having apartments located on top of the buildings have caused more people taking up the spots downtown for longer periods of time. An overview of stores and other city buildings all in the downtown Mason area. Photo via Google Maps, by Ian Kress.

Amanda Palmer, who works at Kean’s Store Company downtown Mason said, “What’s getting to be a problem is all of these buildings have apartments that are all above them, so all of those people can park downtown some place, they still need a city lot pass but then when you come in and try to visit the businesses or anything like that all the spots can be taken.”

Mason doesn’t charge people who are just stopping by for a parking spot, they do have a two hour parking rule between the hours of 8am to 6pm that may not get enforced very strictly but still tries to help the environment.

According to a publication written by Donald Shoup who is a Distinguished Research Professor in the Department of Urban Planning at the University of California, Los Angeles and expert in the economics of parking, if on-street parking is crowded then that will cause traffic which will pollute the air more and waste energy while everyone tries to find a stop to park. Car driving through Mason waits for car to pull out in front of them. Photo by Ian Kress.

There’s a lot that goes on during the summer downtown Mason such as the Sun Dried Music Festival which is why it can be hard to get a parking spot on the main street throughout the summer, said resident of Mason Sue Ware.

It can be challenging to find a spot especially right in front of the place you need to be.

Whipple said, “There’s a bunch of parking spaces out there, but they’re not right in front… it just means that you got to walk across the street and a lot of people have been so used to being able to pull right up and park in front. Many times of the day, you pull up at seven in the morning, you can park in the front, come in and do your thing. If you get here at nine it starts to change and if your’re here at noon then all bets are off especially on a Friday.”

Parking on the street can cause some challenges for drivers having to pull out in front of traffic coming both ways but it’s important for them to communicate with one another and sometimes that means slowly creeping out to make sure no cars are coming, said Whipple.