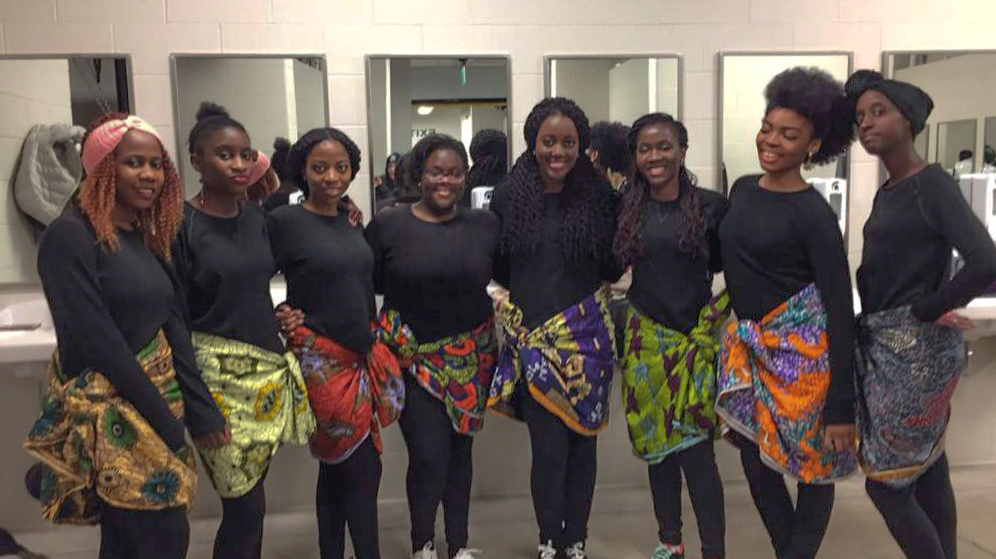 More than two months after nasty weather nearly ruined a celebration of their culture for a second time, African students at Michigan State University say the ill-fated experience was well worth the effort.

“There were so many times I wanted to drop out,” said Abii-Tah Chungong Bih, a student from Cameroon. “Up till the day we finally performed, I thought I’d completely wasted my time. But, now, looking back, I’m so glad I didn’t go through with dropping out.”

Three African freshmen at Michigan State University who wanted to connect with their new home found a way to do so by dancing at a football halftime show. Crafted by the university’s Spartan Marching Band and the African Studies Center, the Celebration of Africa was the featured show of the MSU vs. Maryland football game last November.

When Bih, Racheal Chris Nassimbwa and Chido P. Matsika found out that the show was looking for dancers, they signed up immediately. They felt that they had a responsibility to represent their continent, they said.

In a mix of rain and snow, performers came out into the field in droves, some carrying African flags, others donning African cloth. A drumline was led by Ben Ayettey, the artistic director of the Ghana Dance Ensemble. Members of the marching band performed with drums from Ghana comprised of antelope skin stretched

Nassimbwa said she was honored to watch the Spartan Marching Band perform with the drums from Ghana.

“I felt a connection seeing these students get into playing the drums,” said Nassimbwa. “First of all, I never thought I would see an African drum here, let alone a domestic student playing it.”

The spectacle celebrated the long relationship the university has with Africa, including:

The halftime show was a chance to celebrate those achievements. It also was a chance for the three to make a mark on their campus during challenging circumstances.

“Even though a lot of people left the stadium before the halftime show I was still impressed by the few who stayed,” said Nassimbwa, a freshman from Uganda.

The dancers were plenty nervous.

“I never thought the moment (the halftime show) would come,” said Matsika, another dancer from Zimbabwe.

It is not surprising. A performance that had been months in the planning, had been marred by problems one after the other.

No one performing had expected the weather to be so challenging on the last home football game of the year. It was one of the coldest game days for the school. The rain and snow that day worried the three dancers. The show already had been cancelled once before due to a thunderstorm warning.

Matsika and Bih remember how they had been warming up in the women’s restrooms for that game when they got the news. Abii-Tah Chungong Bih in the costume she wore for the halftime show.

“When we came out, it was like chaos,” said Matsika.

That was when the thunderstorm sent people running for shelter at designated safety areas. And while the football game resumed, it was too late for the halftime show to proceed.

“It was really upsetting,” said Bih. “It felt like all our efforts were for nothing.”

That wasn’t the only problem.

The halftime show was a full month of grueling practice sessions. The African dancers were given the chance to come up with their own choreography and select the songs. Two weeks into practice, the whole routine was scrapped and had to be completely redone due to copyright issues.

It wasn’t difficult getting into the routine,” Matsika said. “I think it’s a feeling all Africans can tap into. We hear the music and our bodies feel the urge to dance.”

The three found that the performance was a mashup of different music and dance styles from all over the continent. While it didn’t fully represent one style, Matsika thought it was a respectful blend of African cultures in a limited time.The three enjoyed dancing to the mashup.

“Africa’s such a huge continent,” said Matsika. “I knew going in that I couldn’t expect the show to only be about Zimbabwe’s music and dance.”

Bih believes that there is an underlying theme between all African dance and music.

“No matter what kind of African dance, we use all parts of our body. Our dance and music is a form of communication. We believe that every body part plays a role in telling a story to those who watch us.”

And the dancers felt the pressure to perform well.

“Some people have stereotypes about what Africa is like,” said Nassimbwa. “I didn’t want to be someone who messed up during it and just give that impression to people.”

Even the combination of snow and rain didn’t bother them when the halftime show, after a disastrous first try, finally came together. In fact, the weather made them dance even harder.

“I felt so charged up. I told myself I would not let the snow take the attention away from my dance. I wanted people to see just the dance. I wanted them to forget about the snow,” said Matsika. Chido P Matsika plays some African songs on her phone.

Each said they would be willing to go through all the practices, the cancellation and the snow and rain again.

“It was an experience that has definitely started my life here in Michigan State University on such a powerful note,” said Bih. “I’d do it all over again.”

Projects products by students enrolled in the Spartan Newsroom class (JRN 400) in the School of Journalism at Michigan State University during 2018.