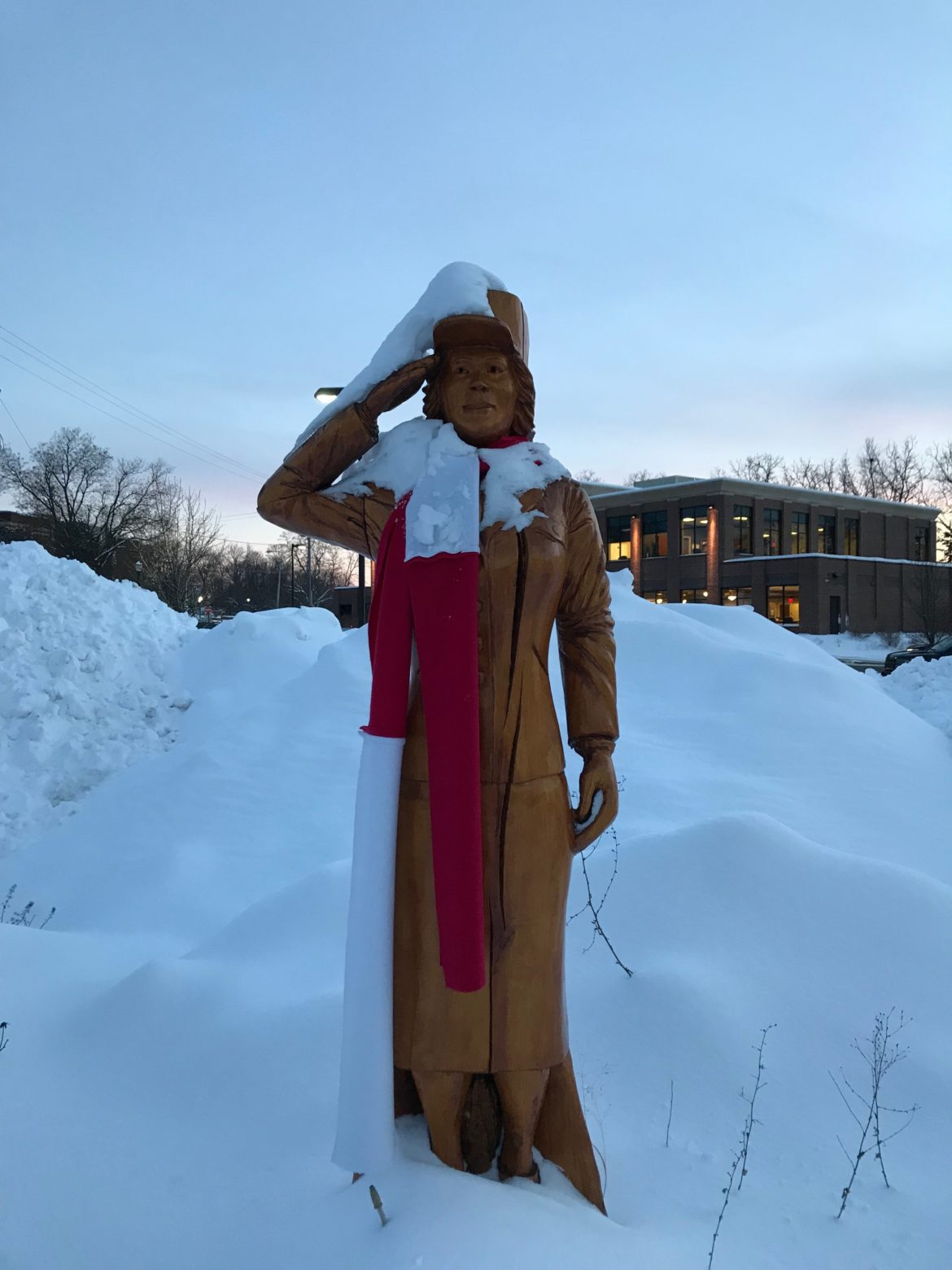 The only female war statue out of the eight located outside city hall. Photo by Ian Kress.

As you drive through downtown Mason there’s a good chance you’ll notice the war statues that are located right outside city hall and how they only add to the historical city.

The statues represent citizens of the Mason community that have served their time in past United States wars. The idea was thought of by the former post commander of the American Legion four to five years ago and took roughly a year to create, said current post commander of  Cavender Post 148 American Legion Leon Clark, who was on the Mason City Council at the time of the idea. The war statues located right outside Mason City Hall add to the history behind the city. Photo by Ian Kress.

Clark said, “I think the Legion did an excellent job with their choice. It offers inside history and is very educational … overall I think they’re unique and show the history to this community.”

Mason’s current mayor, Russ Whipple, wasn’t on city council at the time of the idea but as a resident of Mason for the majority of his life, thinks they’re very cool and something the city can be proud of.

Whipple said, “When they built the new city hall, obviously they wanted to build something that would be some what of a focal point in downtown, we weren’t even going to try and compete with the courthouse … but this is the city government building and so we want it to be something people would recognize and be proud of.”

Not everyone living in Mason quite understands the meaning behind the statues but can easily agree that it adds a cool touch to the city.

When asked about her thoughts on the statues Mason resident Brooke Search said, “I didn’t really know what they were about when I first saw them and honestly I still don’t even know what they’re statues of … I think it’s cool to keep that history alive in modern time like today.” The statues located right outside city hall can be seen while driving down West Ash Street. Photo by Google Maps.

Whipple said, “I don’t know any place around that’s got anything like that and they demonstrate our, at least I believe, our community’s support for vets and for the military and for the country. They span all the big wars … it’s really kind of cool how the guy captured his version of the essence of each solider you know the Revolutionary War solider and the Civil War solider … when you see it you know what war it’s from.”

If you drive through town in the winter odds are you’ll notice the scarves that are wrapped around all the statues, city council had no idea who put the scarves on them, they eventually took them off in the spring but someone put them back on this winter, Clark said.

Clark said, “There have been some complaints about the scarves, people said take them off because it was being disrespectful to those that served. City council however thought it was a nice touch.”

The third statue from the right happens to be the only female out of the eight. Assistant professor, a member in the Department of History, College of Social Science and expert in U.S. and Michigan history at Michigan State University, Roger Rosentreter said, “Women were not in combat all the way up until the Obama administration when he took away all of those restrictions.” The only female war statue out of the eight located outside city hall. Photo by Ian Kress.

Before former President Barack Obama made this decision, many women largely served, but for the most part served as nurses.

“There was a show called M*A*S*H that covered the Korean War and all the women in the show were nurses, I’m not saying that’s all they did but a good majority of them became doctors for the men,” Rosentreter said.

The statues have really caught the attention of many people passing through and the city only hopes to make it more appealing to the human eye.

“People pass through town all the time to stop and take pictures in the summer time and there are always cars parked outside city hall, the Legion did a really nice job with this,” Clark said, “we’ve been contacted by the local garden club about a little landscaping to be done in front of the statues.”