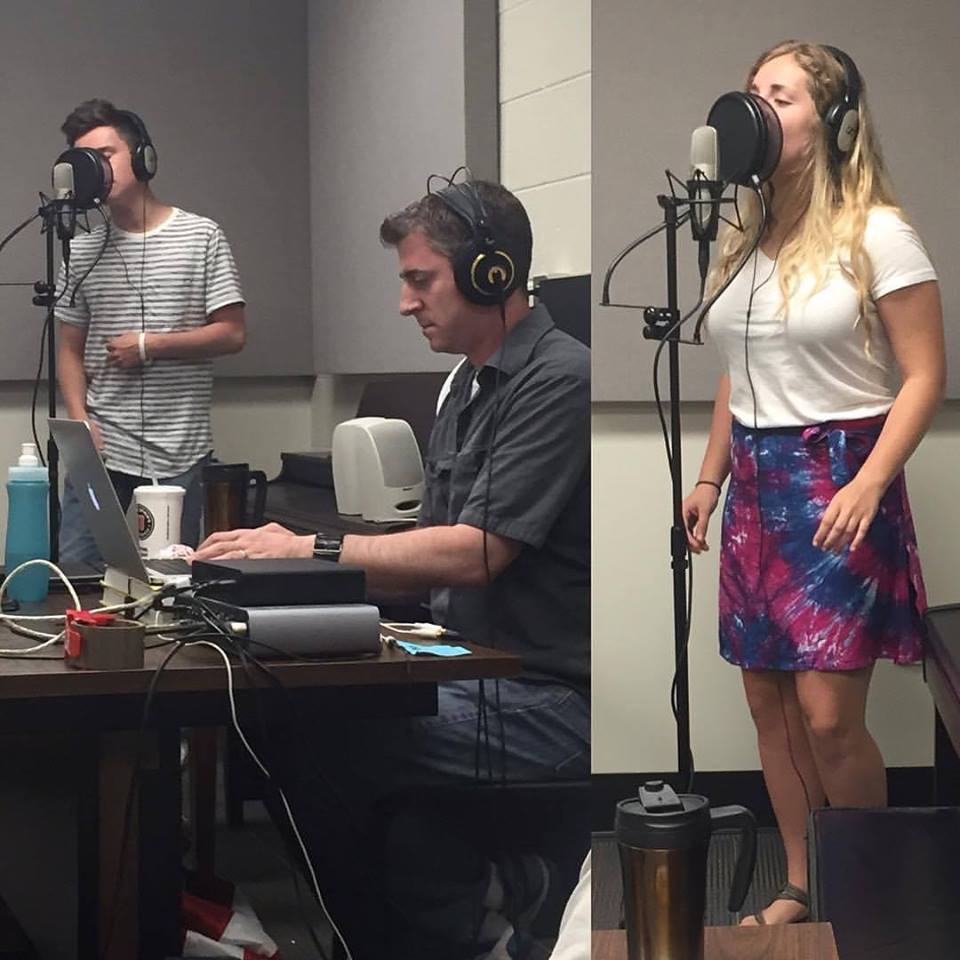 A member of "Noteorious A Cappella" and a member of "Chicapella" record their voice-lines for their arrangements in Brighton High School with an on-site recording rig provided by "Voices Only Productions.”

With more than $116 million in ticket sales, 2012’s hit movie “Pitch Perfect” is loved for its catchy songs, quirky characters, and perhaps most of all, its exploration of the world of collegiate a cappella.

Before “Pitch Perfect,” collegiate a cappella had never been showcased outside of its own platform.

While the film is clearly a hit, does it represent a cappella in real life?

Corey Slutsky, owner and founder of Voices Only, a West Bloomfield a cappella recording and producing company, says the movie is half accurate.

“The biggest deviation from real life was the riff-off scene,” said Slutsky.

The movie’s riff-off is a highly technical competition between groups where they quickly sing songs back and forth.

“That would never happen in real life, since it’s near impossible to spontaneously create a workable arrangement on the fly like that.”

Members of Michigan State University’s a cappella community agree that the riff-offs in Pitch Perfect are the most unrealistic.

“It’s something everyone in a cappella wants to do. It simply just isn’t that easy” said Brendan LaRose, a member of the all-male group, The Spartan Dischords.

Jamie Park, former member of the all-female group Ladies First, agrees: “It’s nearly impossible to come up with an arrangement off the top of your head.” The Spartan Dischords open for the January 18th Pistons vs Atlanta Hawks basketball game at the Palace of Auburn Hills.

Also questioned by the a cappella community is the rivalry between the groups in the movie.

“Maybe it happens in other schools, but I feel like there has never been any extreme animosity between the groups at MSU like the Treblemakers first had with the Bellas,” Park said.

There are many things that members of the community feel are accurately portrayed in the film. Among them is the setting at the International Championship of Collegiate A Cappella, an annual, multi-level competition that takes place in February and March and ends in New York for finals.

“This is a real event that happens,” said Selame Kedist, vocal percussionist, former contestant on NBC’s “The Sing-Off” and national a cappella consultant.

In the film, the Barden Bellas make their way through quarter- and semi-finals to finals at New York’s Lincoln Center, which used to be the venue for the real competition finals. All of these steps in the competition are true to the actual event. Soloist Jamie Park performs with Ladies First at the 2016 ICCA semi-final in Chicago.

“It was hard to find people to buy tickets to Lincoln Center and that baffles me because the actual venue was gorgeous,” said Kedist. “Now with the appearance of the movie, finals tickets sell out within two hours.”

The movie provided jobs by infiltrating the real-life a cappella community with the on-screen one, said Kedist, who worked with Deke Sharon, the music director for the films. Some of the singing was dubbed by real singers.

“The bass notes that Brittany Snow sings, those are from the vocal cords of Johanna Vinson. She’s a live female bass. For the Barden Bellas, they had an actual female beatboxer,” Kedist said.

Apart from the national competition, the movie’s biggest similarity to reality is the comradery within the groups, say real singers.

“I think the movie accurately depicts the closeness of all the groups,” said Jack Ernst, a member of MSU’s co-ed group State of Fifths. “We all hang out a lot outside of the actual singing. A Cappella has given me the opportunity to meet some of my best friends.” “It is an irreplaceable and world-changing experience,” said Park. “Making music alongside your best friends and seeing other groups doing the same thing in different ways is so eye-opening. Music brings people together in ways you would have never expected.”

LaRose agrees: “The men and women you create these experiences will leave an impact on you for the rest of your life.”

“I can say that some of the greatest individuals I have ever met in my life have been introduced to me by this community.”