John Coscarelli says living in DeWitt is like living amongst a big family.

Coscarelli, who owns Relli’s Italian Restaurant, has been a part of the DeWitt community for 22 years.

“Once you live here, you’re part of a family,” he said. “It’s a whole different culture. It’s different than East Lansing or Lansing, everybody knows everybody.”

Coscarelli said the people are always there for each other.

“When you need something, everybody kind of steps up,” he said. “When someone gets sick, people do fundraisers, they bring you food, they take care of you. It truly takes a village to raise a kid.”

One of the main events that rallies the community is DeWitt’s annual Ox Roast that occurs during the summer, organized by the Downtown Development Authority (DDA). This year’s will be the 73rd edition.

“For a lot of people, they identify DeWitt as the Ox Roast,” said DeWitt City Administrator Dan Coss. “It’s a festival that we shut the whole downtown down, close all the streets, there’s a food tent, bands, art festival, craft show, car show, the whole nine yards.”

“They do crafts and games for the kids, we bring in a DJ and stuff, and you see a lot of the locals come out,” said Coscarelli.

“Folks that grew up here, maybe moved away and came back, they still identify DeWitt as the Ox Roast,” said Coss.

That small-town charm is what the people of DeWitt like, and it’s what brings them back when they move away.

“I’m so happy to be back here,” said Ellie Hundt Sutherland, general manager of Sweetie-licious Bakery Café, who grew up in DeWitt before moving to Omaha, Nebraska for a brief period. “It’s never weird to be like ‘oh, I moved back home,’ it’s like ‘yay, I live in DeWitt,’ and I’m happy to be a part of the community. It’s funny, just having a new baby, and being excited to stay here and know this is where I want to be is great.

“It’s not a big town, but there’s enough here to make it worthwhile and the people are a lot of that,” she said. During what Hundt described a slow period during the mid-afternoon at Sweetie-licious, people were still filing in and everyone was interacting with each during their time in the store. Photo by Ben Clemens

Even people who don’t live in DeWitt, but work in the city, notice the sense of community around town.

This camaraderie doesn’t stop short with just the people, it expands between the business of DeWitt too. Tim Russell, owner of the Family Tree Café, could list up and down Bridge Street and Main Street the people and their businesses in downtown DeWitt as if they were his restaurant’s specials of the day.

“If I like something, I’m going to support it,” said Russell, despite if there’s possible competition. “A lot of the businesses that are part of the DeWitt Chamber of Commerce are looking at ‘how can we help attract more customers, more folks,’ down to the little hub of DeWitt in a way where DeWitt is a destination, whether it’s food businesses, or any of the salons, the chiropractors, various different businesses that are available.”

“It’s nice with the businesses themselves and the community that everyone’s really close,” said Hundt. “For the most part, everything that brings downtown helps everyone out, and nothing really crosses over too much. We have a good amount of events; the Farm Market, the Christmas Market, the Ox Roast, and all the businesses help or donate or help or do something with all those events.”

The Farmers Market and Christmas Market too are both initiatives by the DDA, allowing businesses to get to know each other.

Hundt said it’s common for the businesses nearby to recommend each other if customers are looking for something they don’t specifically have but another place does. Additionally, it’s not unusual for customers to double-dip in their purchases by bringing what they buy at one place to another while also purchasing from the place they moved to. 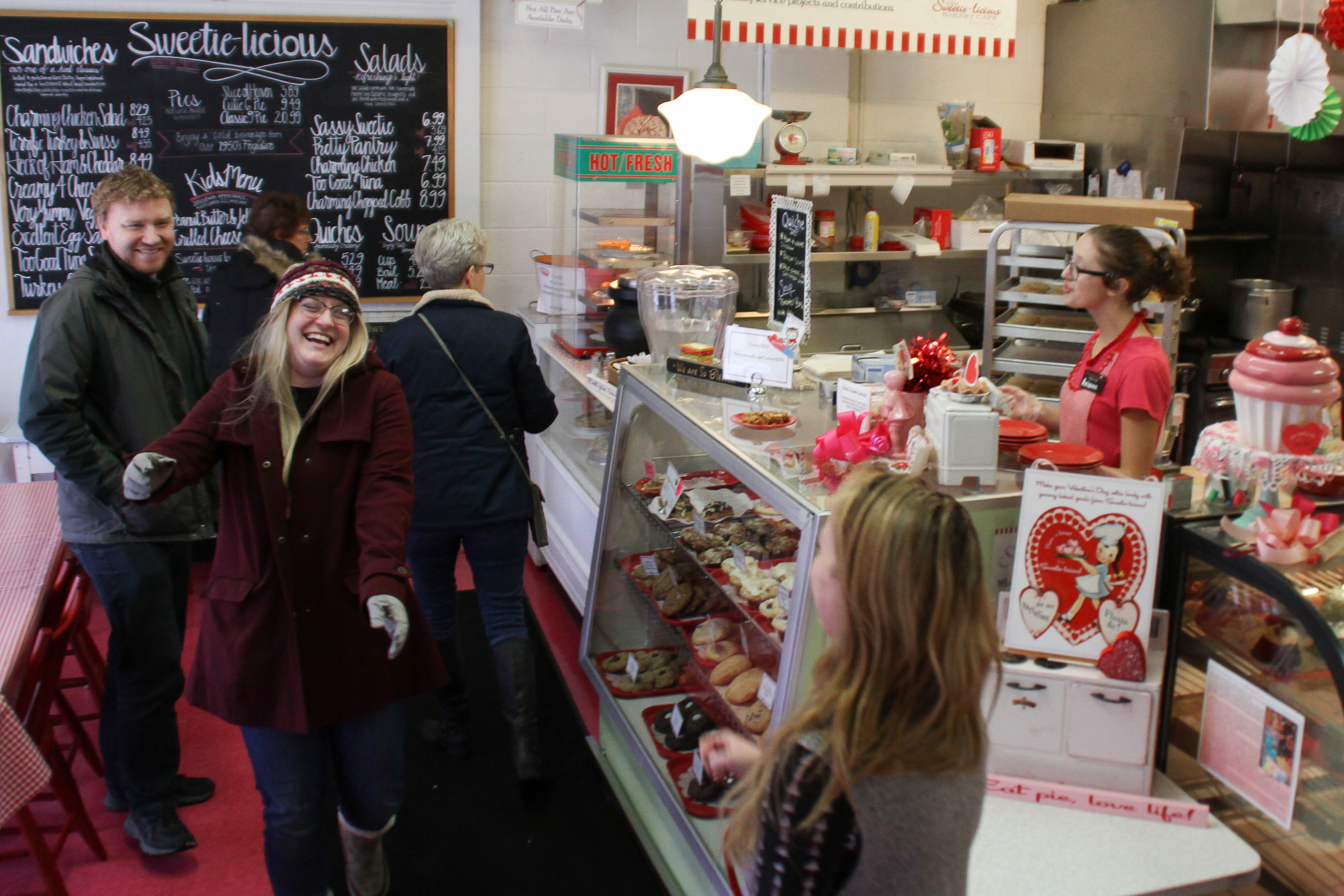 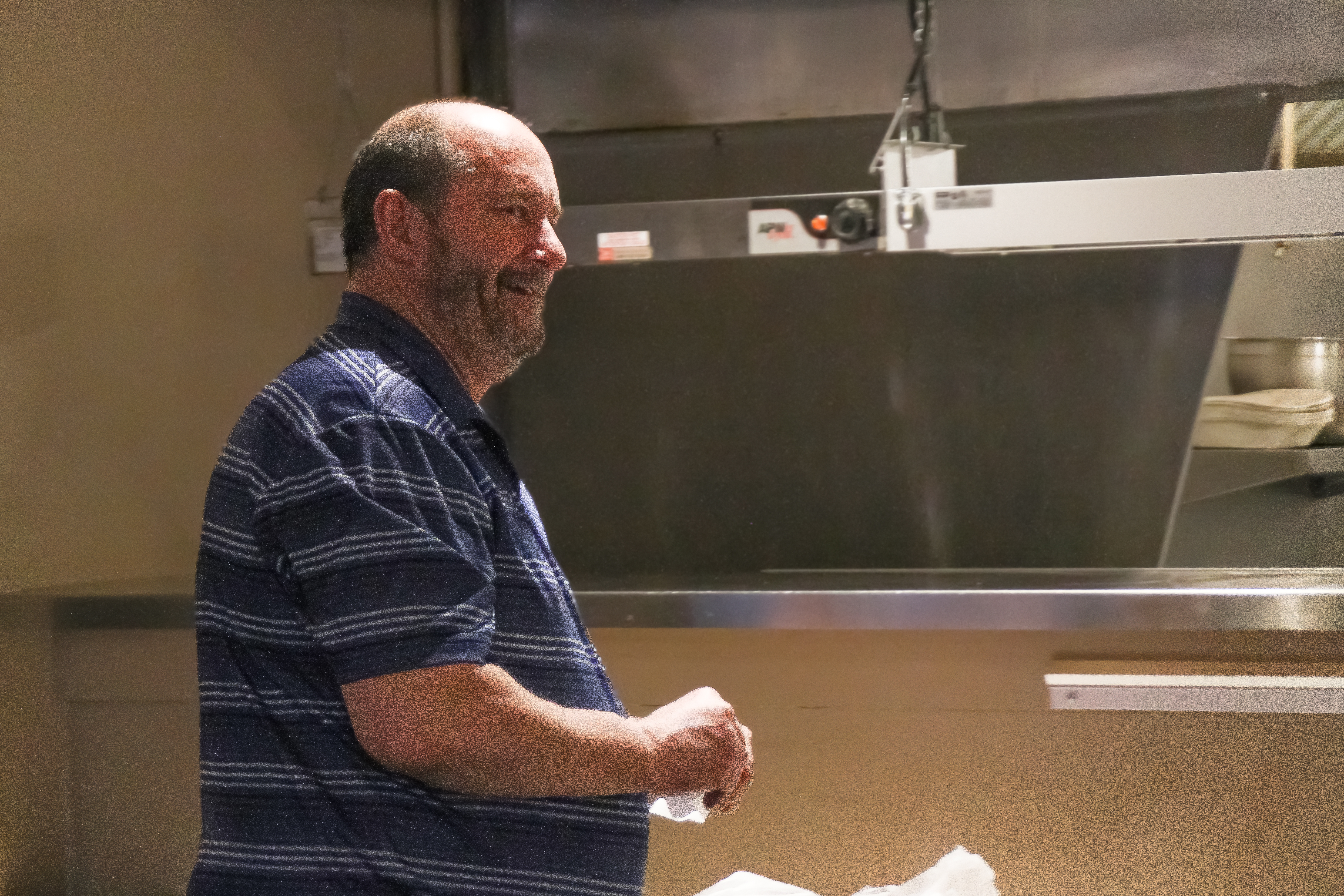 Tim Russell, owner of the Family Tree Cafe, said he has no problem with any added restaurant competition downtown, since it'll help make DeWitt a destination with more people coming overall. Photo by Ben Clemens. 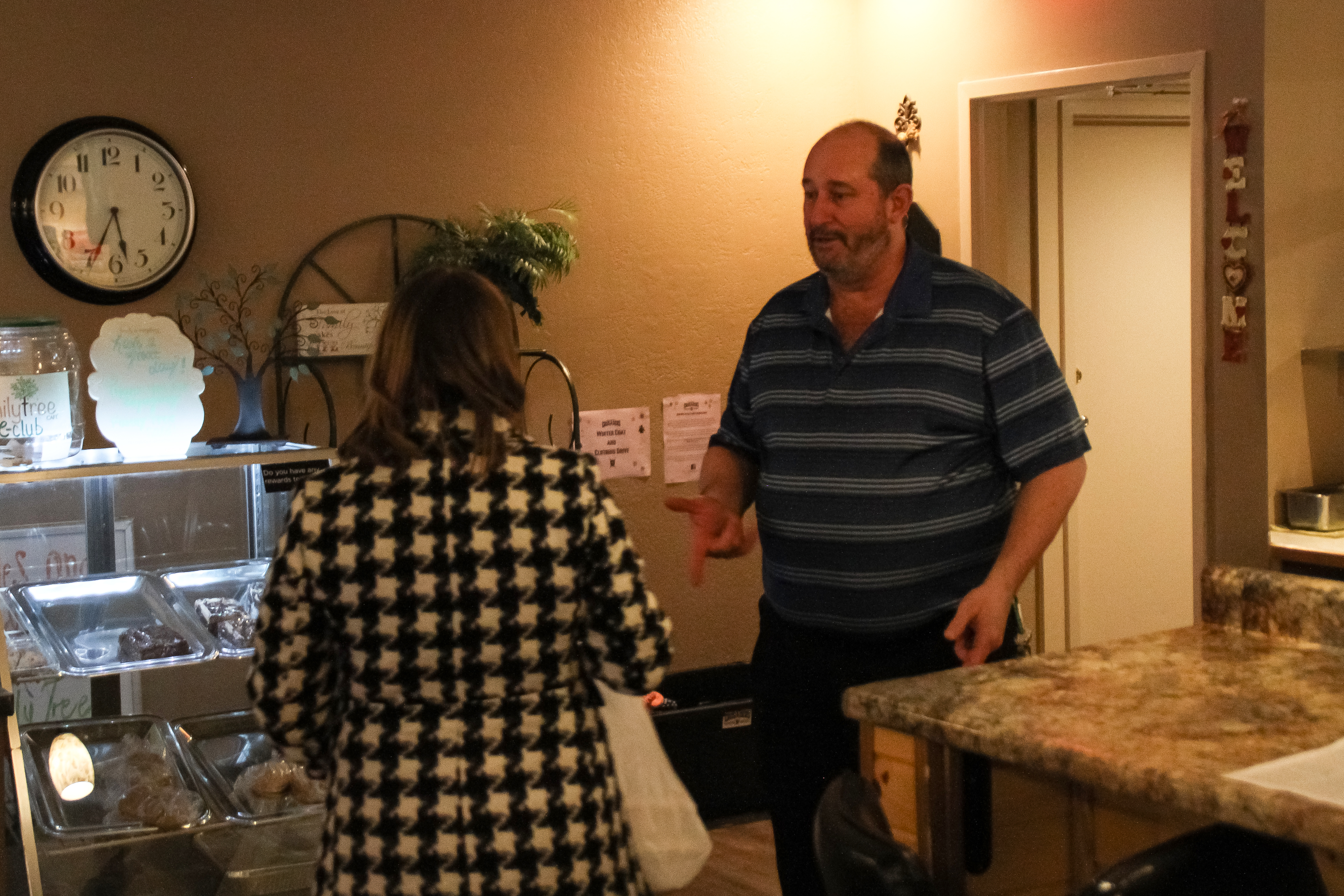 Russell's interactions with everyone in the store was nothing short of welcoming, having spirited conversations with all his customers, sit-down or take-out. Photo by Ben Clemens. 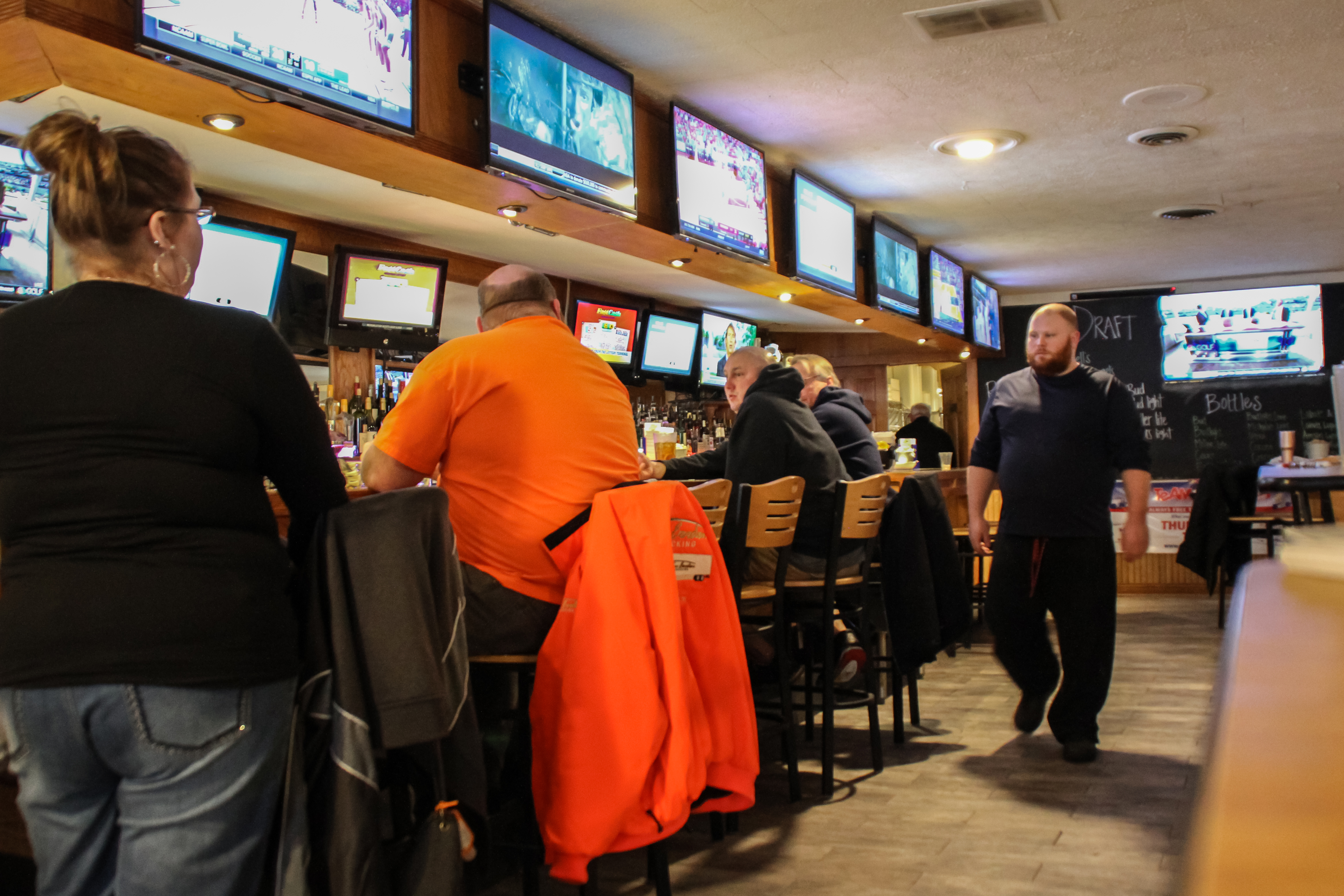 During lunchtime at Relli's on Super Bowl Sunday, everyone at the bar interacted with each other like it was a regular occasion. Photo by Ben Clemens. 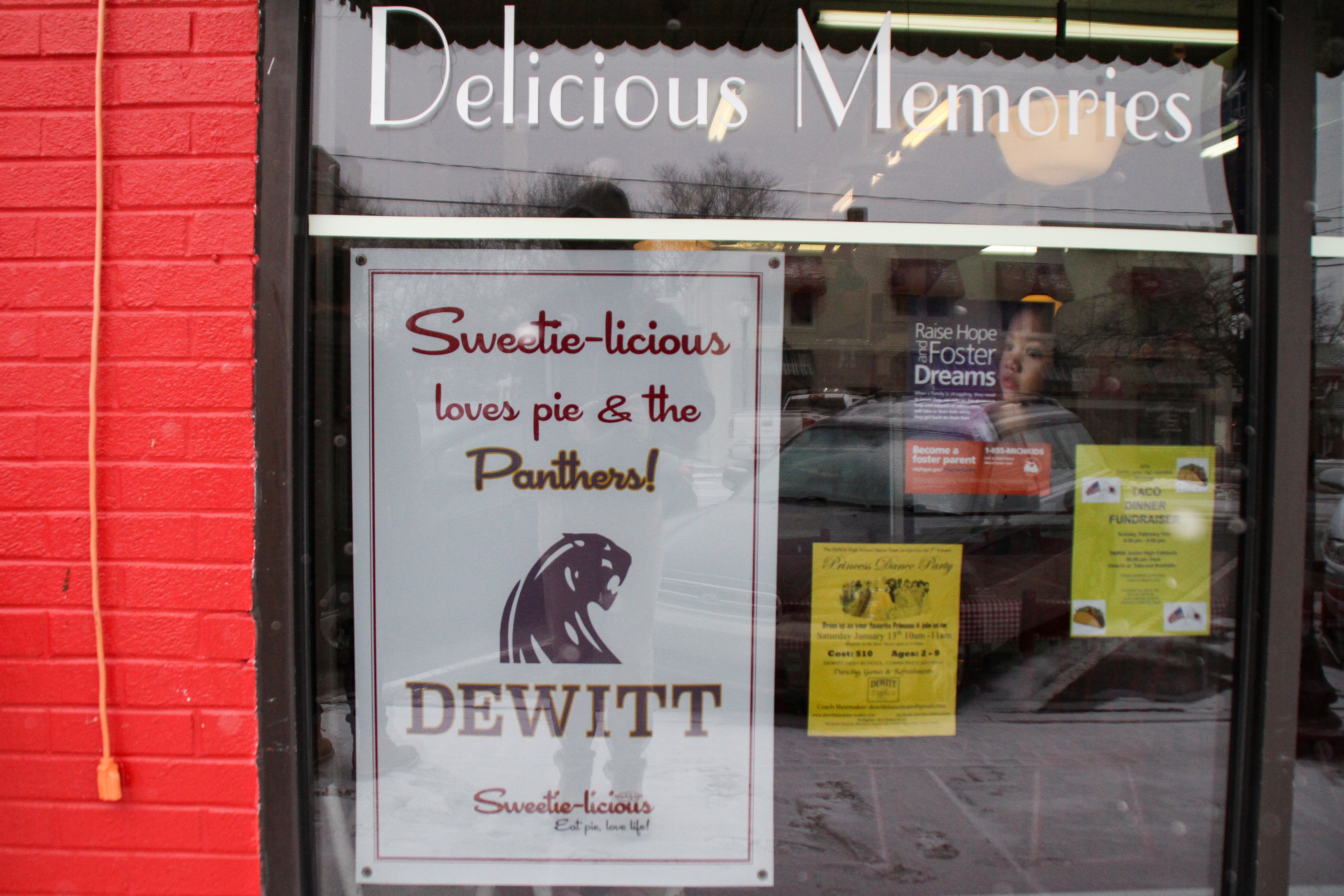 Hundt said Sweetie-licious gets many donation requests, but they like to keep what they do as local as possible. Photo by Ben Clemens 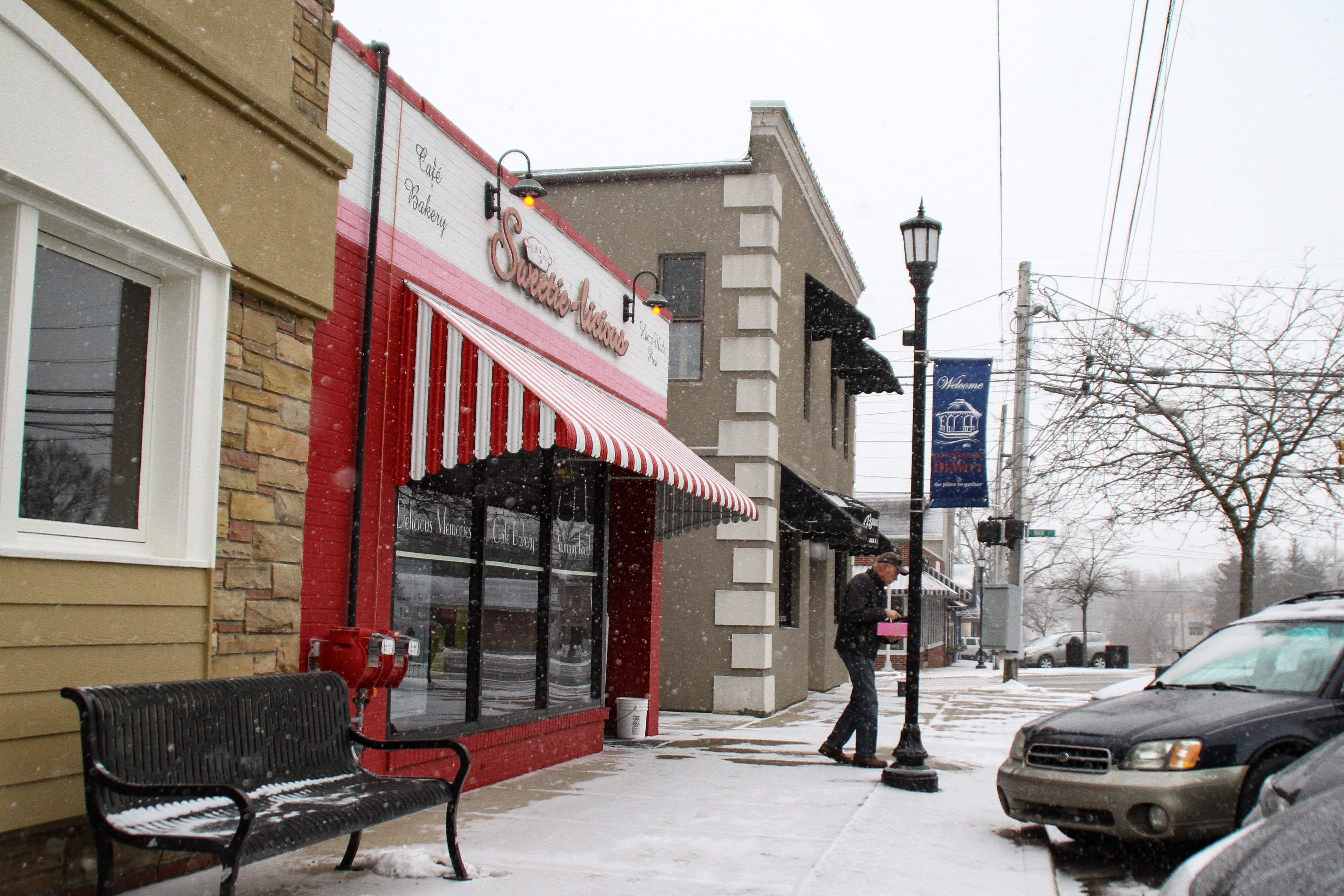 City Administrator Dan Coss said the city of DeWitt is planned so businesses all remain in downtown DeWitt, with residential development around it to "maintain that small-town feel.” Photo by Ben Clemens

“We don’t care, it’s just great for everybody to get people down here.”

“Everybody works together, it’s not cut-throat,” said Coscarelli. “It’s just a community, we all help each other. We all realize that if one guy does well, then it’s going to bring more people down here, and that’s good for everybody.”

Part of the work by the city government to keep businesses together and from expanding too much is done through the zoning of the town, keeping everything inside one area downtown.

“We have a central commercial core area, that we have, through our planning process, have opted to not expand,” said Coss. “Often times communities will expand and grow commercial corridors in those locations, we’ve opted to maintain our downtown district and stay as a bedroom community, with mostly residential development around that commercial core, and I think that helps preserve and maintain that small-town feel.”

On the topic of growth, there’s no hiding DeWitt’s community has expanded tremendously. From 1980 to 2016, the Michigan population rose by 7.2 percent, while the city of DeWitt has seen a 49.1 percent growth in population.

Yet, this growth is of little concern to the community in possibly breaking up DeWitt’s tight-knit nature, and most people welcome the newcomers.

“Whenever we have a new person it’s exciting,” said Ashley Pineiro, a senior at DeWitt High School. “We’ve spent the last 14 years of our lives with the same people in our classes. It’s expanding a lot so people are kind of accepting it.”

“Life goes on, progresses forward, things are apt to change,” said Russell. “So, try to work with it and make it a good thing. I haven’t seen anybody making a big deal about anybody else moving into the area. I think meeting new people is an experience, so why not enjoy it versus shun it or complain about it.”

Hundt said the city has been inclusive to new residents of the area.

“That’s never been the talk, like ‘oh we’re getting bigger, I don’t want other people coming,’” said Hundt. “I’ve never heard that from anybody, and I hear a lot being in here. For the most part it’s a really positive community.”