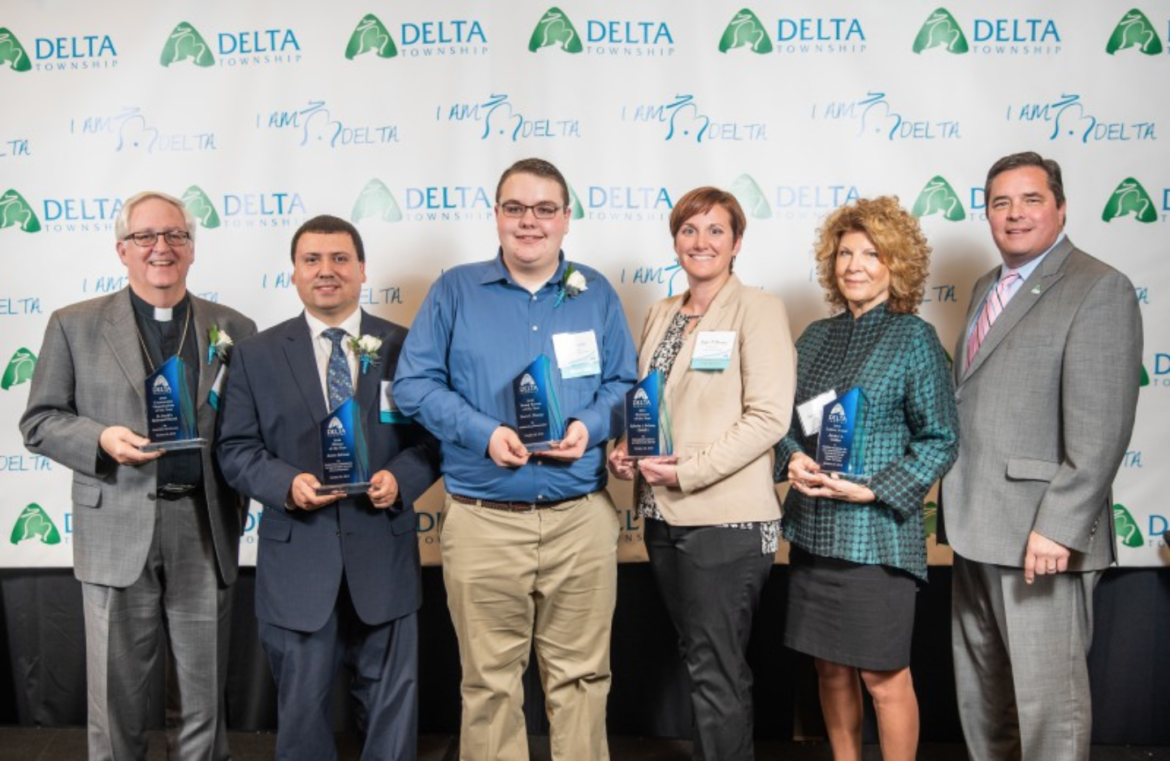 Award winners of the Delta Township Community Awards Ceremony on Oct. 25. Xavier DeGroat was awarded Citizen of the Year Award. DeGroat stands second from the left.

Xavier DeGroat began meeting with local leaders in 2009. He met with labor union officials, politicians and business executives around the city of Lansing and Michigan to educate them about autism spectrum disorder.

His goal: to create equal opportunities and an equal environment for those who are on the spectrum.

DeGroat, of Delta Township, has since created a foundation to continue his advocacy for people with autism. He is the founder and CEO of the Xavier DeGroat Autism Foundation, which he founded last year.

Autism spectrum disorder is a group of developmental disorders related to brain development that impact how a person perceives and socializes with others. This can cause problems in social interaction and communication.

Autism spectrum disorder can be identified at an early age. It can be tracked as a child grows up. A child will encounter many different interactions and relationships as they grow up. These relationships can help a child with ASD, and can prepare them for their future. This information goes through important stages in the life of a child growing up with Autism spectrum disorder.

Autism programs at this age focus on parent education and family goals, as well as the young child. There is no diagnostic test for autism spectrum disorder. Doctors have to look at the child’s behavior and development to make a diagnosis. ASD can be detected as early as 18 months; at age 2 a diagnosis from a professional can be considered reliable. Usually children do not get a diagnosis until much older.

Attending school full time allows children to further  develop social and cognitive skills. The goals at this stage for treatment focus on the individual, their skills and their ability to follow along with peers.

At this stage, children start to go through puberty. This,  along with social relationships, body awareness and increased independence are a few of the issues to address. Parents and caregivers begin developing a plan for the future and expectations in education and employment. Sometimes peer-to-peer programs are set up to help individuals. Peer mediation can help grow social interactions, group learning and tutoring during times of mild behavioral distress.

Adults with ASD, with the proper resources, can live a productive, independent and fulfilling life. How the individual was prepared for adulthood when they were younger also makes an impact on their development. As they grow older, the individual has to make transitions for health care, including insurance, and financial planning.

DeGroat was recently awarded the Citizen of the Year honor at Delta Township’s annual Community Awards Ceremony for his work.

“I felt successful and I felt honored,” DeGroat said. “I felt like the words I’m trying to get out there, that make a difference, are beginning to be out there. And this award was just a big, little start towards a whole entire scope of what I want to get done.”

“He’s a very focused and determined young man, committed and has a good heart,” said Clark.

About 1 in 59 children in the United States have been diagnosed with autism spectrum disorder, according to estimates from Centers for Disease Control and Prevention’s Autism and Developmental Disabilities Monitoring Network. The number of U.S. children diagnosed with autism spectrum disorder has been on the rise, according to data from the Autism and Developmental Disabilities Monitoring Network, a group of programs funded by Centers for Disease Control and Prevention.

The spectrum includes disorders that used to be separate. These include autism, Asperger’s syndrome, childhood disintegrative disorder and an unspecified form of pervasive developmental disorder.

There is significant effort throughout the world to raise awareness about autism spectrum disorder, what it is and what can be done to help. There are programs to help spread awareness like Autism Speaks. There is also research being done including on the campus of Michigan State University.

Courtney Venker, an assistant professor in Michigan State University’s Department of Communicative Sciences and Disorders, is doing research with children from ages 2 to 5 who have been diagnosed with Austin spectrum disorder. She thinks it is important that people with autism are helping to spread awareness.

Venker launched a new research project in January 2018. Venker said research is also really important to find what treatments are most effective.

“The project is to help better understand word learning in kids who are on the spectrum,” Venker said. “One thing that makes this project different is we focus on what does attract their attention, things that are big, brightly colored and patterned. Things that a lot of people would focus their attention on.”

“After I met the coach (Dantonio) that day, we became friends like immediately, like boom,” DeGroat said.

DeGroat also recently held an event at the Jack Breslin Student Events Center at which  Izzo and Dantonio spoke. Spartan Sports Support was an event that was meant to help bring attention and support to autism spectrum disorder. 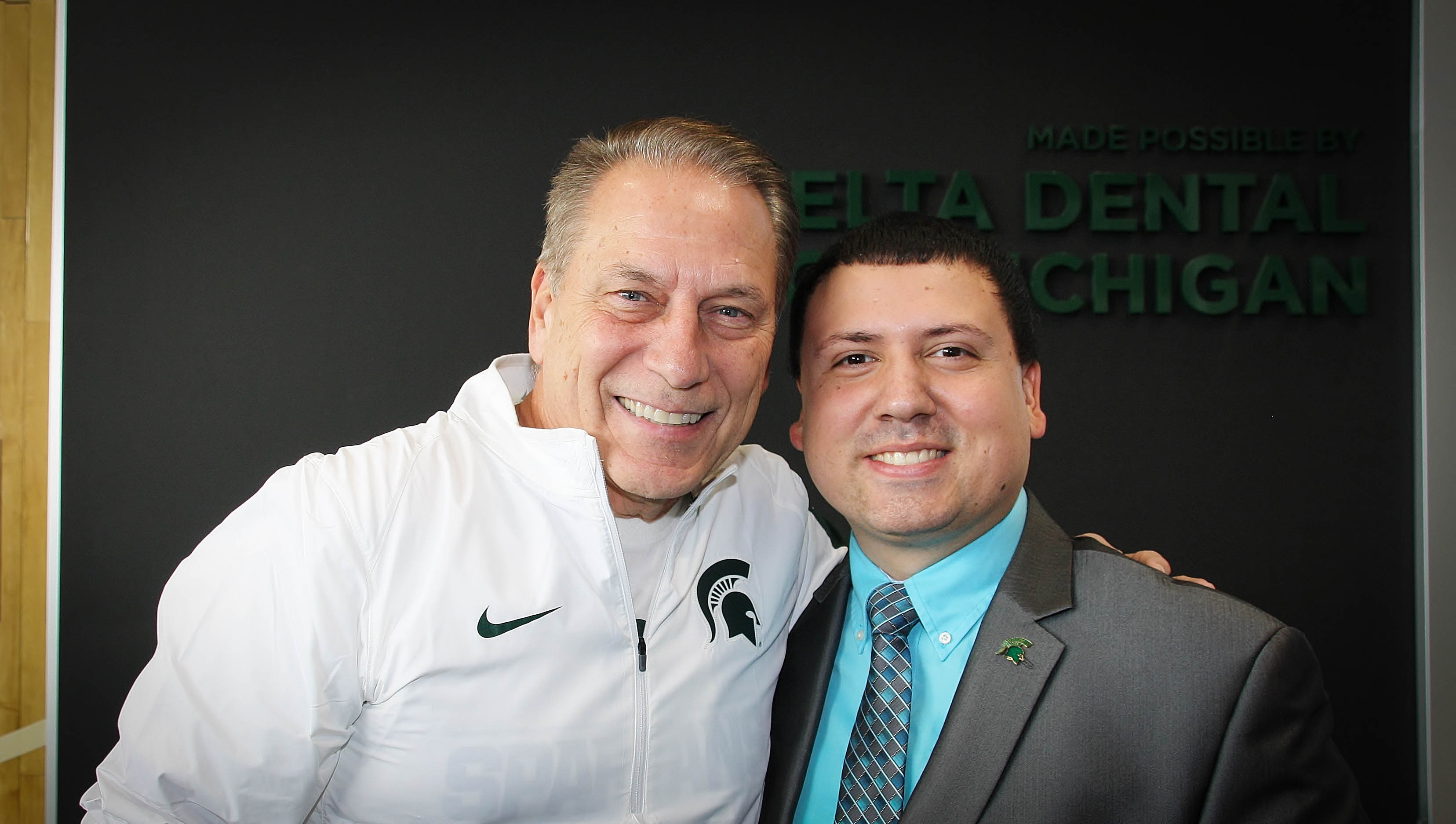 Tom Izzo, head coach of the Michigan State men’s basketball team, spoke at Spartan Sports Support. Izzo has gotten to know DeGroat through his advocacy, and spoke on how autism reform is something that is important to our society. Photo provided by Xavier DeGroat. 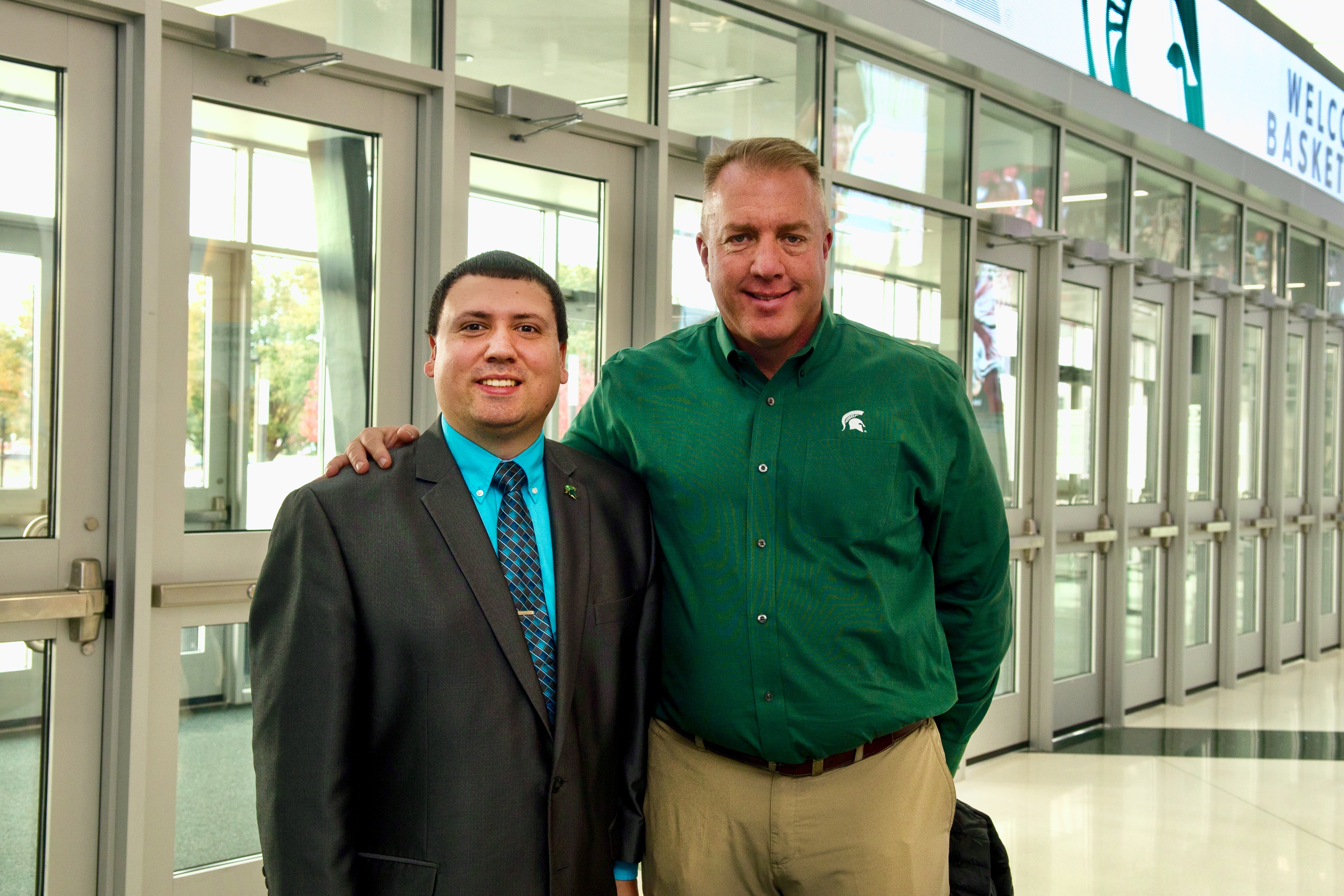 DeGroat also advocates for those with autism in education, financial troubles and the workforce.

According to the Autism Society, 35 percent of young adults between 19-23 with autism have not had a job or received postgraduate education after leaving high school.

DeGroat wants to continue his foundation in the future, continuing it either full time or as a hobby. He hopes to be able to work in the sports industry or in the government.

“He’s full of ideas, he has lots of great ideas about understanding and awareness,” said Clark. “He’s pretty sharp and I think he’s doing a good job.”

DeGroat was recently accepted into Michigan State University, transferring from Lansing Community College. He plans to start in the summer of 2019 and to study communication.

“My autism isn’t just a MSU thing,” said DeGroat. “Autism is a non-partisan, non right-wing, left wing issue. It’s something I can get U of M to support even though they are rivals of MSU.”