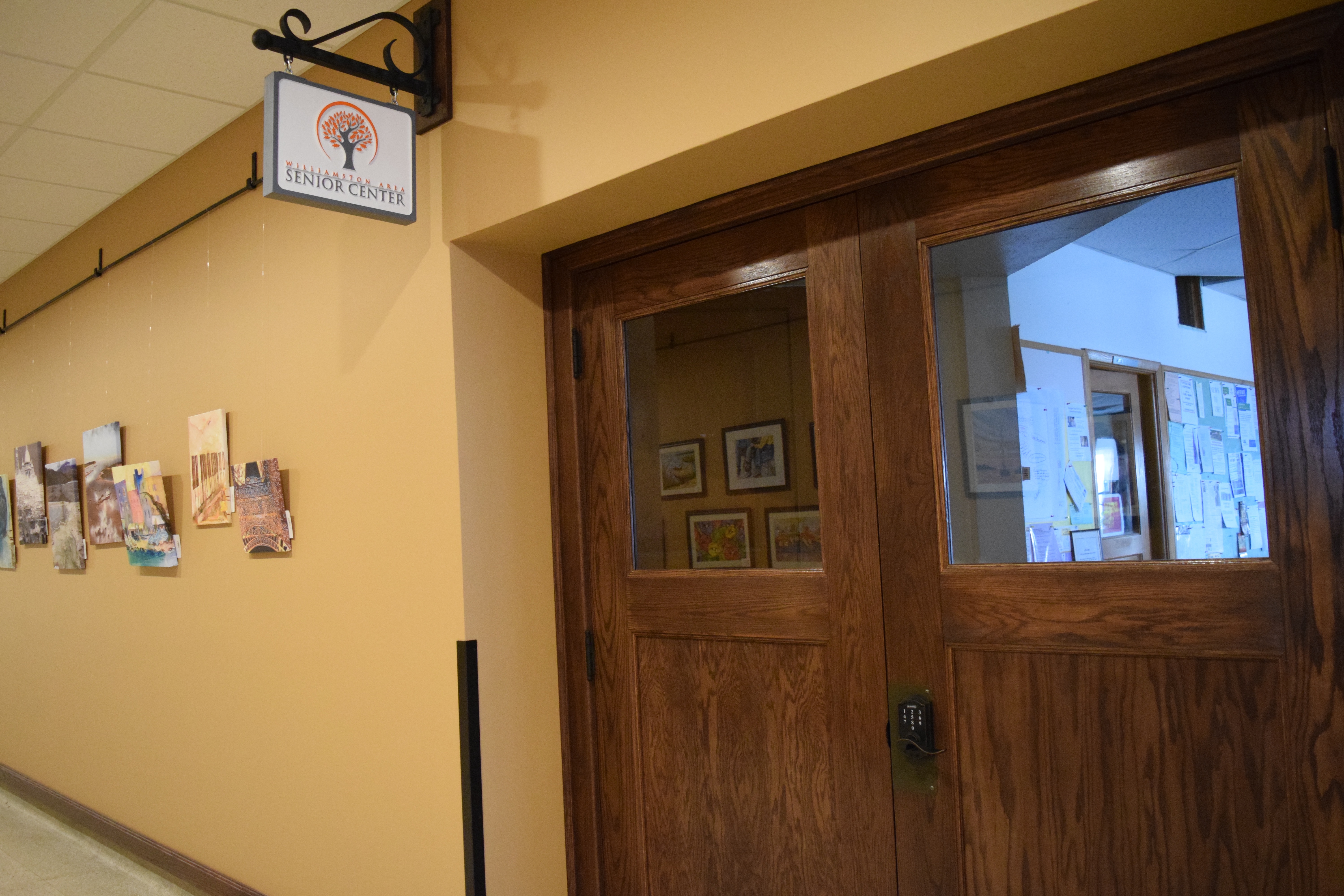 The senior center has been located in the building for over 20 years. With phase two, it will be expanded and a full commercial kitchen that is FDA approved will be added. Photo by Mattie Milne 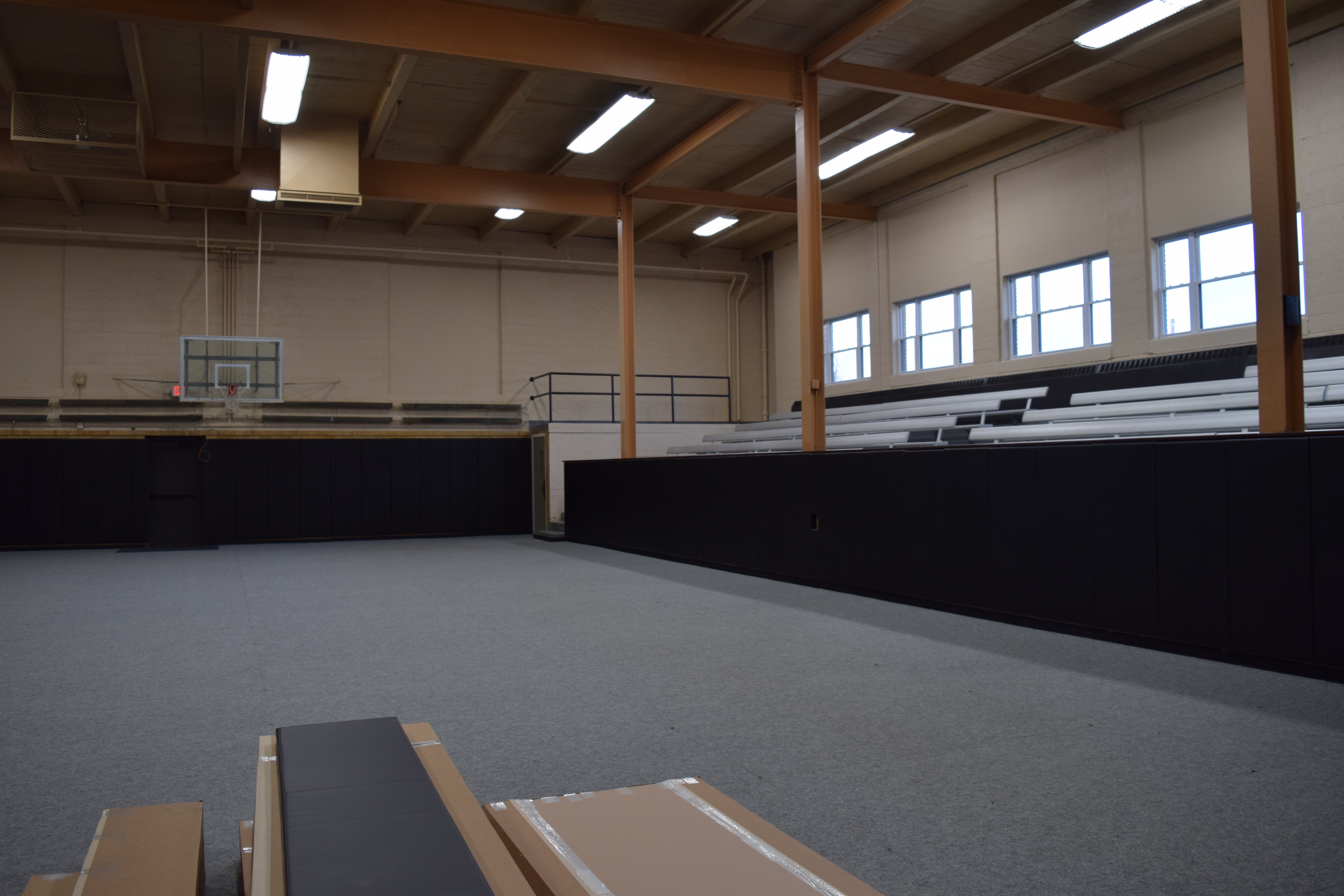 New pads, refurbished wood, and brand new flooring were installed in the gymnasium. Tim Baise said with the new curtain, lights and sound system, they hope to host concerts and plays. Photo by Mattie Milne 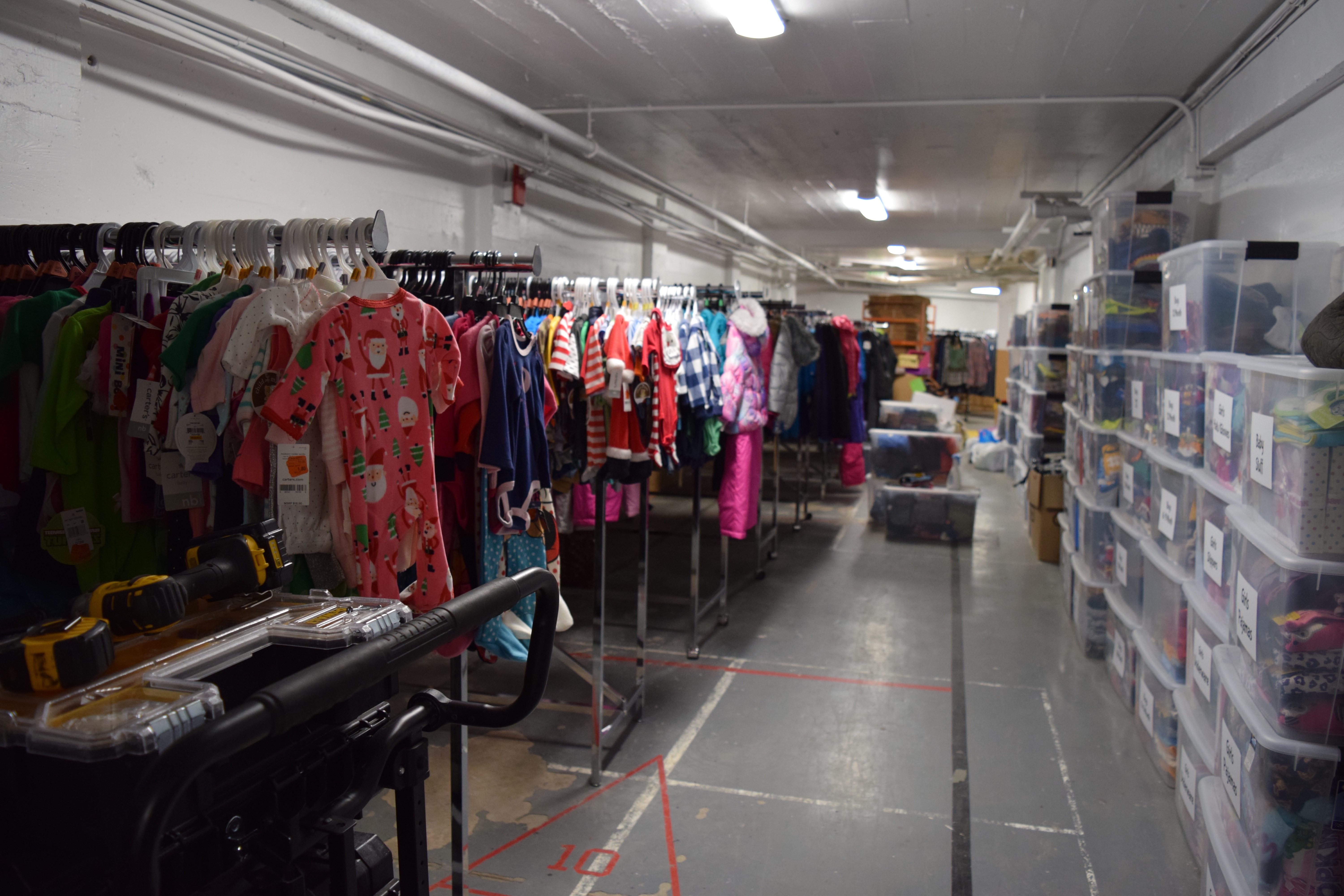 In the basement of The Commons there are rows of new clothing for those in need. Photo by Mattie Milne 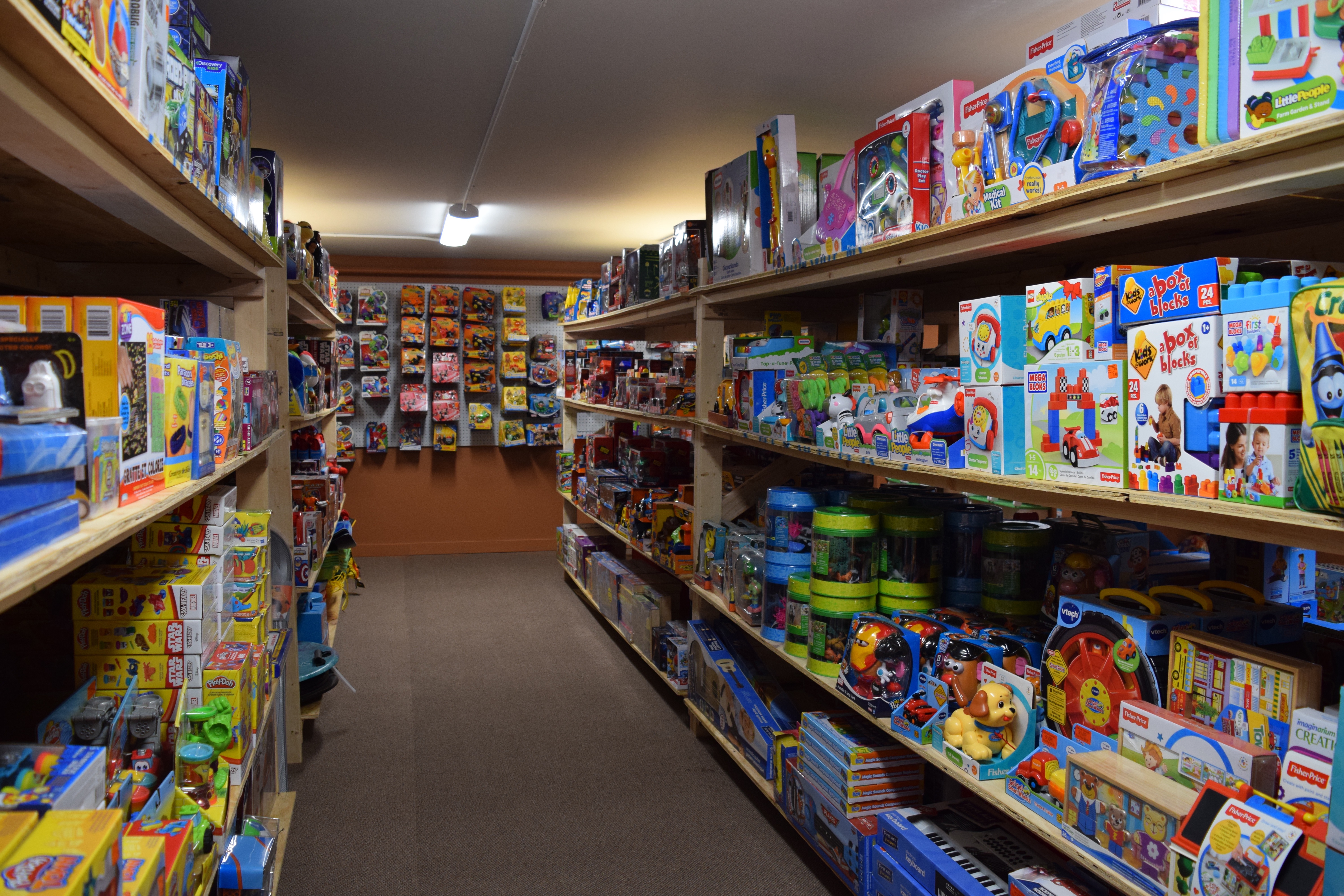 The Baises donate around 10,000 toys a year. Photo by Mattie Milne 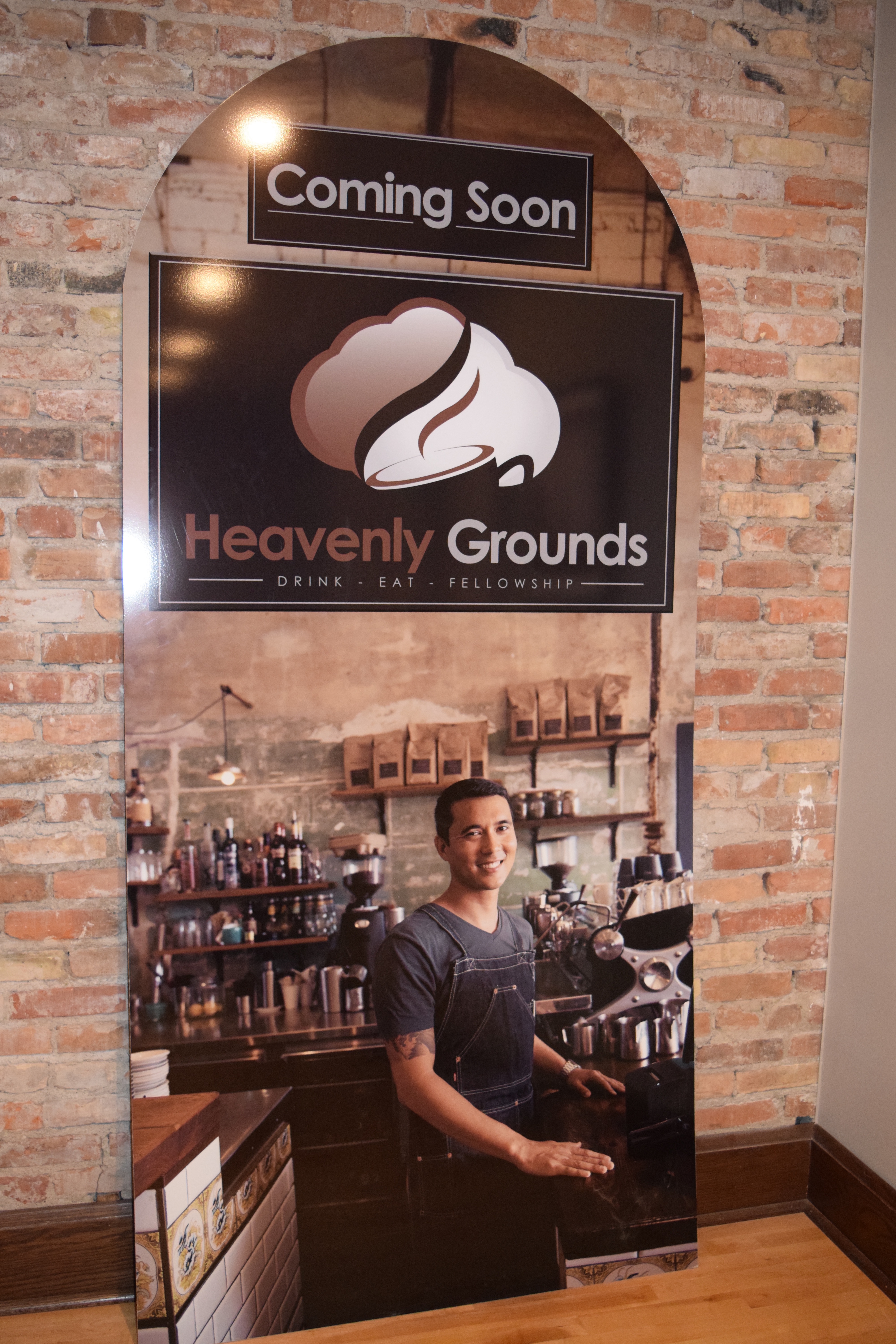 Phase two includes the addition of a drive-through coffee shop. The coffee shop will be run by Harvest House Ministries. Every dollar made will go into feeding the hungry and supplying goods for those in need. Photo by Mattie Milne 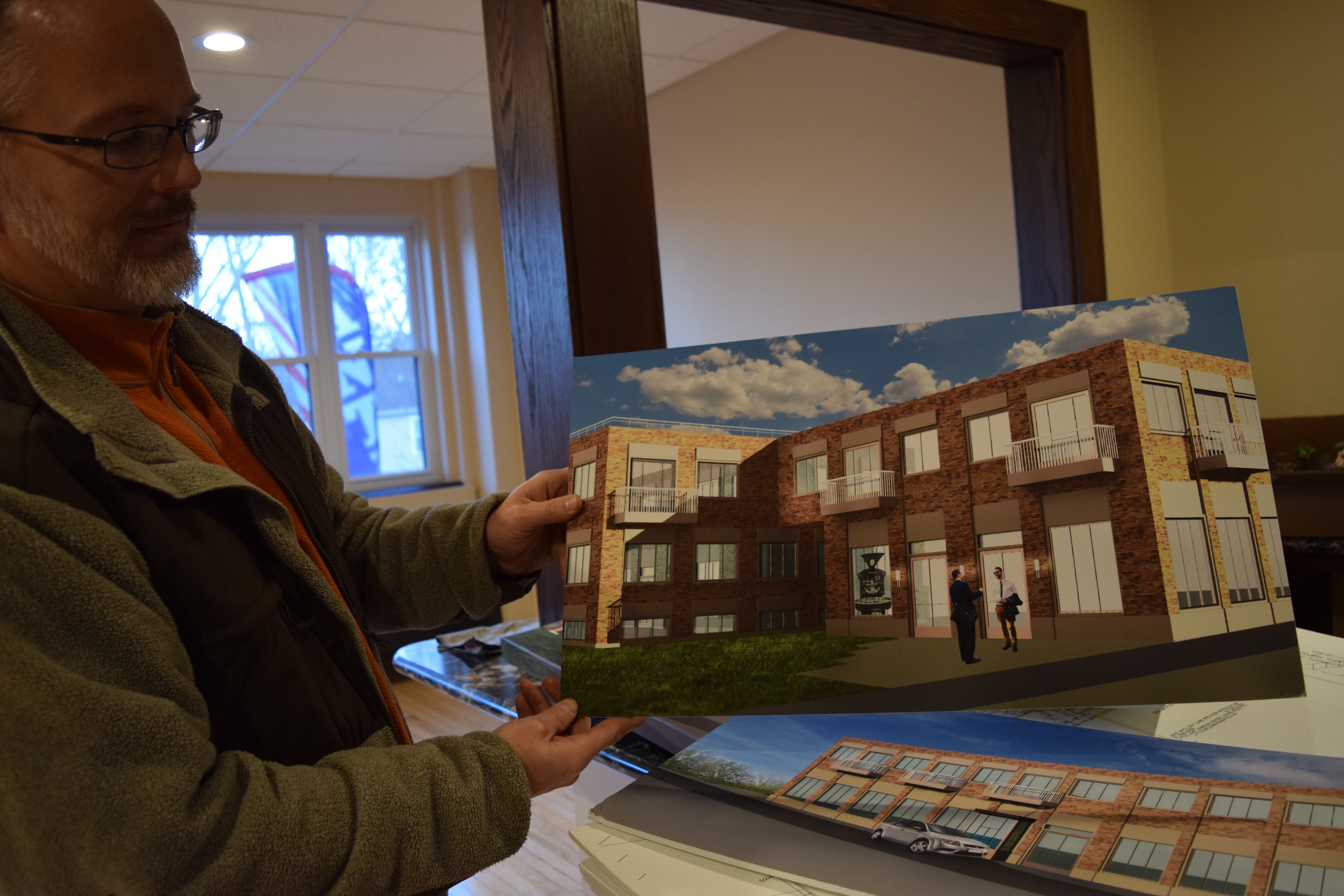 Co-owner, Tim Baise holds up the plans for phase two which includes a three-story add-on to the building and a new food bank across the street. Photo by Mattie Milne 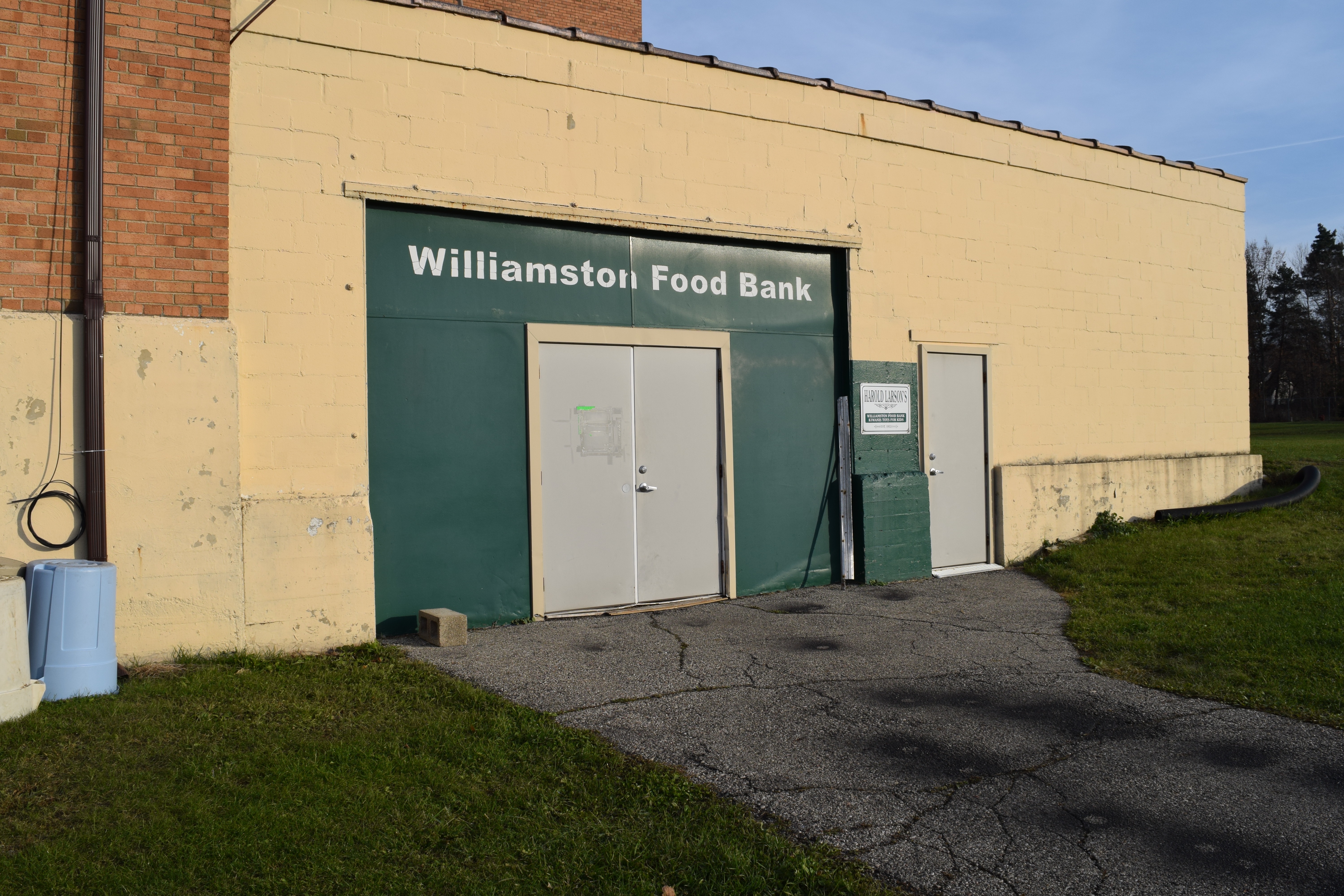 Phase two involves the food bank relocating to a newly constructed building across the street. The current food bank will be replaced with a day care facility. Photo by Mattie Milne 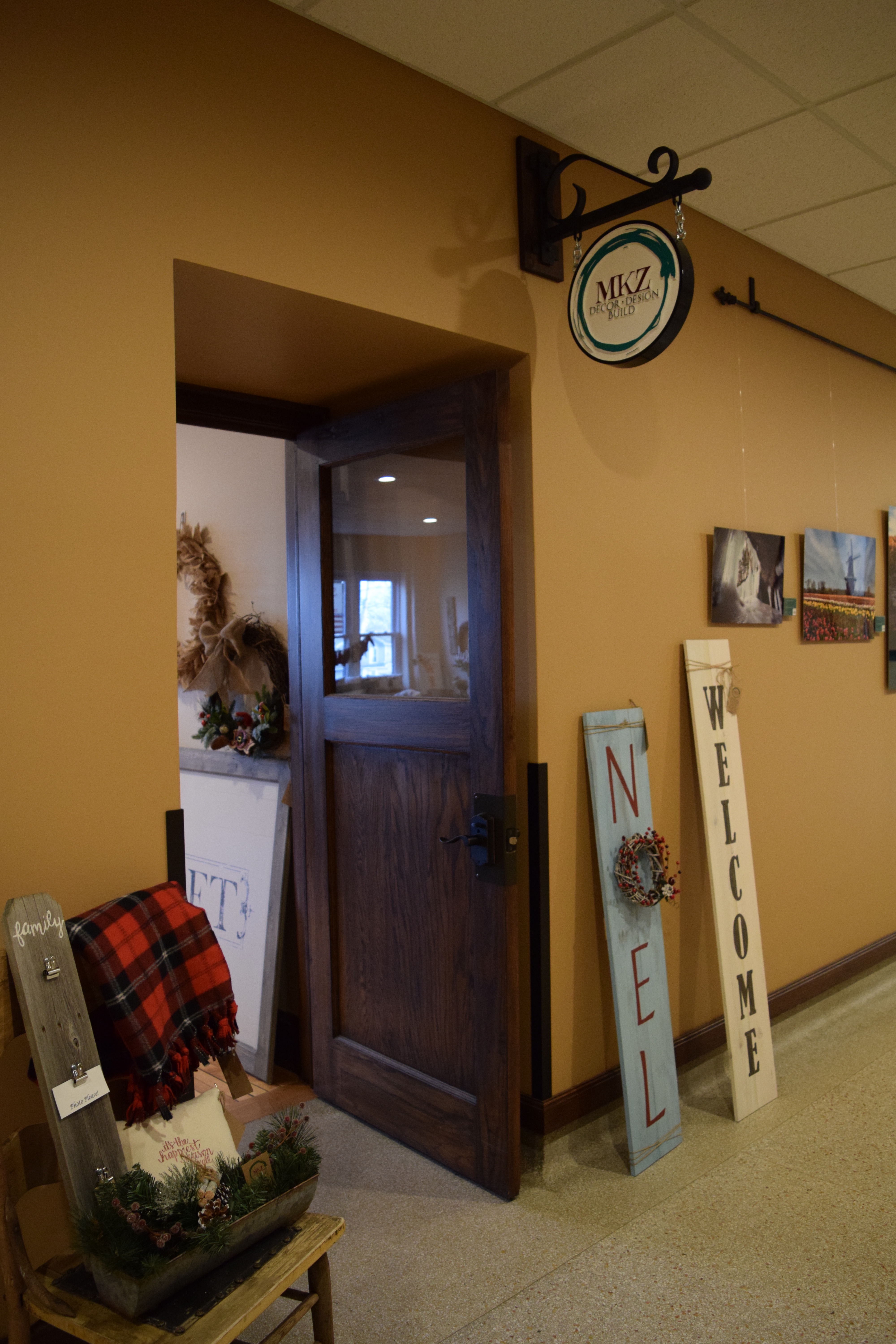 MKZ Designs is just one of the many retail shops in The Commons. “Everybody that walks in, I ask if they’ve ever been in before and three quarters of them are telling me no, this is their first time,” shop owner Kelly Zalma said. “We are getting more foot traffic.” Photo by Mattie Milne 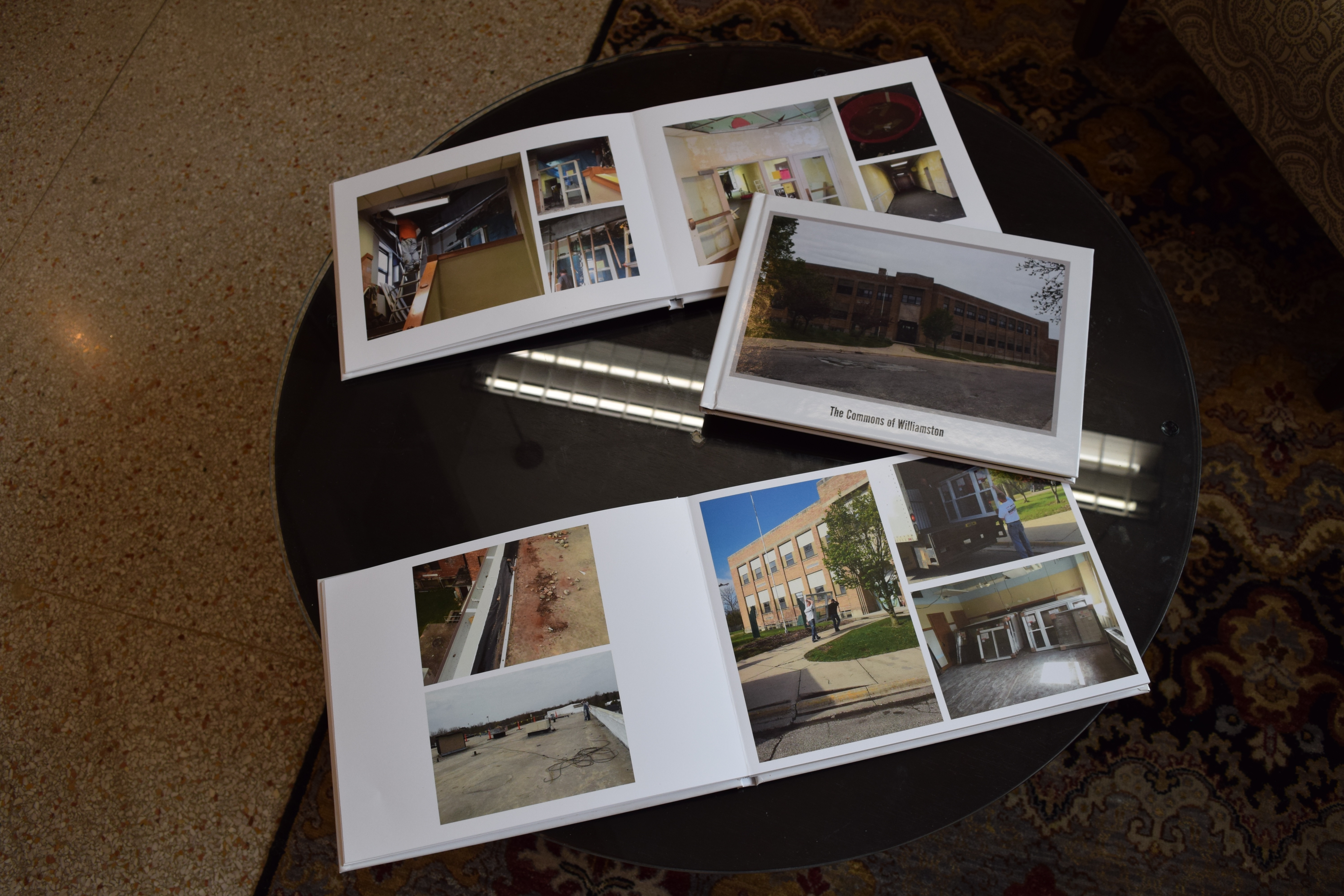 Photobooks are located throughout the hallways showing the renovation process of the building. Photo by Mattie Milne 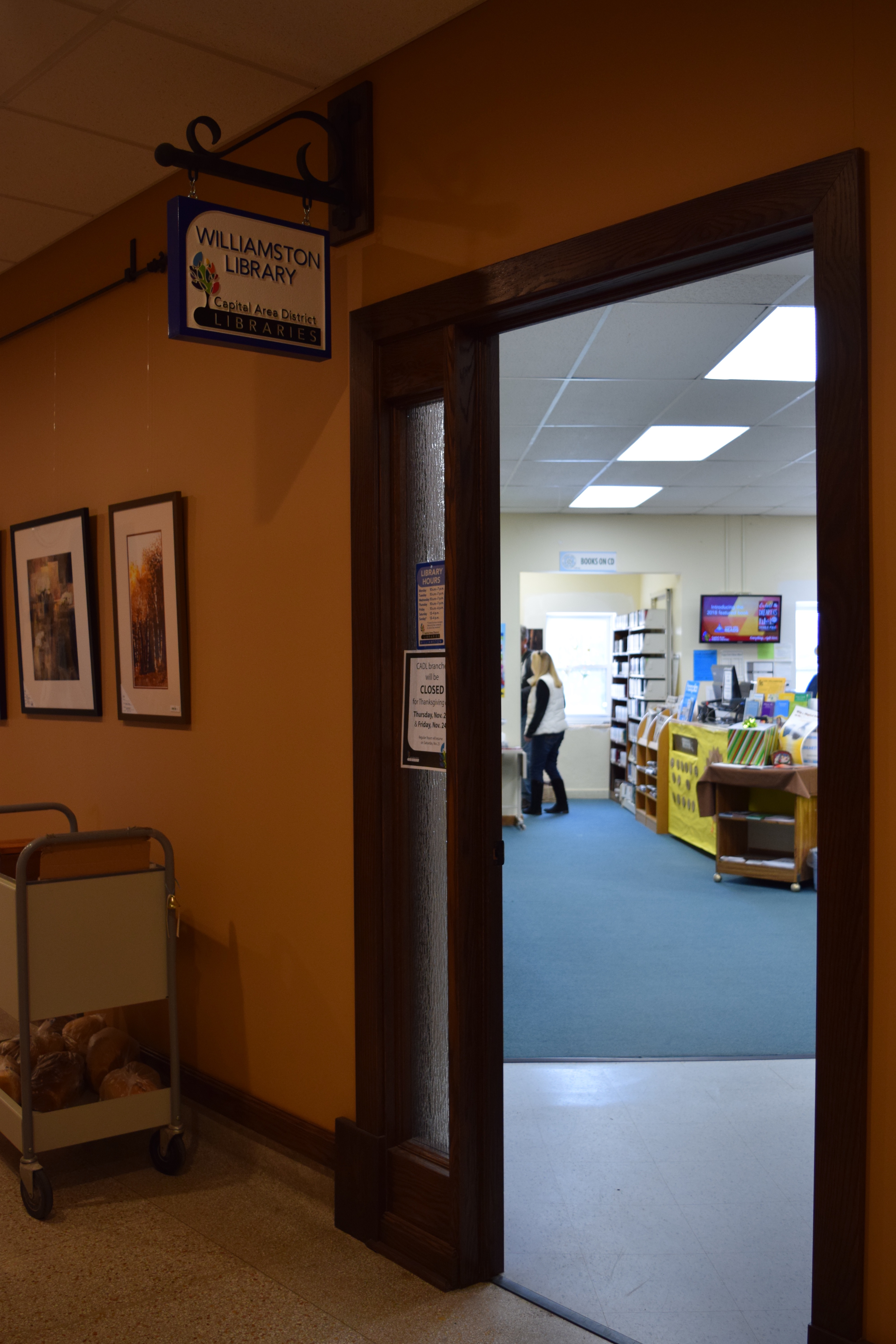 The library moved to the community center in 2007. After the Baises took ownership of the building in 2015 they fixed the windows, painted the walls and relocated the library’s door. Photo by Mattie Milne 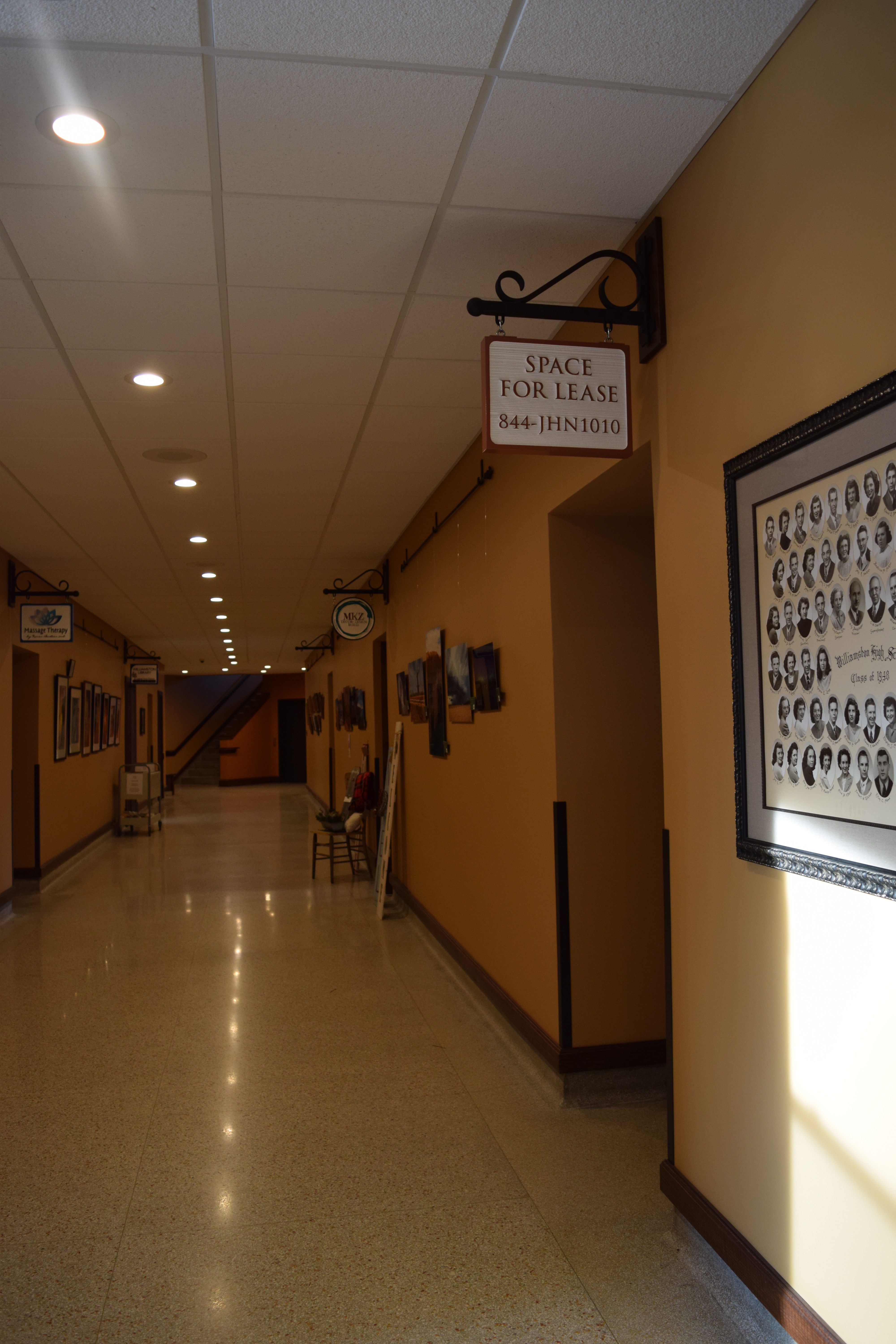 There is only one space available in The Commons. Photo by Mattie Milne

There’s a building that has been standing strong outside Williamston’s downtown district since the late 1800s. The old community school has been refurbished to serve a new purpose.

From the wear and tear of students age 6 to 18, multiple fires, and a tornado hitting the city, the building still remains a gathering place for Williamston.

Tim and Tracie Baise purchased Williamston’s community center from the city in March 2016. They are using their nonprofit charity organization, Harvest House Ministries, to operate and run the building. When Tim Baise first saw the site, it was in disrepair. The Baises rehabilitated it into what is now known as The Commons of Williamston.

“You can’t rebuild this thing the way it is with the architecture. That’s why you don’t see buildings like this anymore. It’s too costly,” Tim Baise said. “The insurance has a replacement value of 8 million dollars. You just can’t build something like this anymore.”

The building was originally constructed as the Williamston High School in 1874, then later used as the elementary and middle school.

Linda Siciliano attended junior high in the building during the late 1960s. One of her most fond memories is gazing out the large windows and basking in the sunlight. Fast forward over five decades, and those exact windows are one of many features being updated.

“I enjoyed the fact that it was the same building my parents attended school,” Siciliano said. “There was good feelings about the connections to the building and the community. I think people are valuing history a little more than they did a few decades ago.”

Tim Baise said what they are doing is like nothing the city of Williamston has seen before. In addition to this major renovation and future add-on to the building, most of the profits made from The Commons go back into helping the community.

They removed the carpet to reveal the terrazzo floors and polished the woodwork. Necessary updates were made as well. They took out the lockers and replaced the decaying roof and leaking windows, while leaving behind as much of the building’s historic charm as possible. Old class photos line the hallways as a reminder of the history of the school and Williamston.

Mayor Tammy Gilroy said it was a good thing the Baises purchased the community center because the city did not have the municipality funding in order to do all of the necessary repairs that were needed.

“I can remember us discussing the financial aspect and how it was going to be a win for the city and a win for the community. My initial thoughts, and then now seeing everything the Baises have done up until this point, have been nothing but a good thing,” Gilroy said. “They could have turned their heads and said there’s way too much to do, but they didn’t. They jumped right in and put the funds in to making it a fully functioning building again.”

After the community schools relocated, a small portion of the building was used to house the Capital Area District Library, Williamston Senior Center, food bank and day care center. The library, food bank and senior center have remained, but the Baises have renovated the classrooms so that more services could rent out the rooms.

Gilroy said that The Commons has provided an extension of Williamston’s downtown district.

“It brings back full use and capacity of that building. While the city had it, it was not fully occupied,” Gilroy said. “I think it’s been a fantastic addition of our downtown district because what it has done is opened the door for more service-oriented retail businesses to come to Williamston.”

One of the business owners, Kelly Zalma said the idea of starting her own shop at The Commons sparked when she was visiting the library with her family. After seeing the work being done to update the building and speaking with Tim Baise about his charity work, she realized it was a good fit.

“We are committed to staying here indefinitely and building our business,” Zalma said. “It’s a brand new business. It’s really exciting and we’re happy to be here.”

The basement, which Siciliano recalls being a fallout shelter when she went to school in the 1960s, now stores rows of new clothing and toys.

Tim Baise said one of the main reasons they purchased the building was because they needed a bigger place to keep their collection of donation items. Throughout the year they provide these goods to those in need. A few weeks before Christmas they host a toy drive.

Along with the several services already provided, such as a yoga and photography studio, hair salon, and antique shops, the Baise’s are currently working on phase two.

The next stage will include constructing a new, 4,500 square foot food bank and free store across the street. The free store will allow community members to donate gently used goods to provide for those in need. The current food bank will be replaced by an 80-child day care facility.

They will also expand on the current 39,000 square foot building. The new addition will be connected off the recently renovated gymnasium.

This three story addition will include an expansion on the senior center, a drive-through coffee shop, office suites, and a rooftop terrace overlooking the high school’s football stadium.

Mario Ortega from Williamston’s Planning and Community Development Department has been working closely with the Baises since the start of the site plan review. Ortega has reviewed both the original site improvement plans and phase two’s current plans.

“Tim felt that it was an opportunity to reuse it. It would be what he envisioned in having small offices or commercial spaces that could be rented out to smaller businesses in the area and they could provide different services,” Ortega said. “It was his vision.”

The project reflects past designs of schools. Ortega believes that because the historic building can be reutilized, The Commons is an asset for Williamston.

Tim Baise said his vision brings people back to some of their best memories from learning in the exact classrooms now used to provide goods and services. He said The Commons brings people joy that would not be possible if the building was torn down and constructed new.

“Just about everybody who went to school in Williamston, this was their school. When people come in to shop they’re just like, ‘You’re kidding me? I had English class in this room.’ We show them the toy drive in the basement and their arts class used to be down there,” Baise said. “When people come in here because of everything that was saved, it means a lot.”