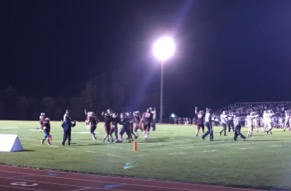 Coming into the year, the Okemos Chiefs football team was looking to make a big turnaround from their previous season, which ended with a 2-7 record.

With returning senior leaders like Jason Pridgeon, Drew McGaughy and Patrick Nugent backed by plenty of talent on the depth chart, it seemed very possible.

After a strong start to the year going 4-0, where the contests were far from close, Coach Jack Wallace and his Chiefs went on a three-game losing streak.

“It was a tough. We went on the road and played some really talented teams,” Wallace said. “We lost focus and it came back to bite us.”

Coming into week eight, Okemos had its last home game of the season against cross-town rival Holt. The 3-4 Rams were just coming off of a loss to Sexton High School and looking to bounce back.

With the stands packed and the Friday night lights glaring down, both teams took the field. Chiefs super fan and Okemos Athletic Director Ira Childress was hopeful his boys would take home the glory.

“We can do this,” he said. “The team has been working harder than I’ve ever seen them. Those seniors are ready to go out on a win.”

From beginning to end, the Senior Night game was something of a spectacle as several of Okemos’ players decided to kneel during the national anthem.

Taking notice, Childress only had to say that his players, “no matter how small the platform, absolutely have a right to do whatever they want and send the message they want to say.”

With a handful of injuries to Damian Hudson, Drew McGaughy and starting quarterback Jason Pridgeon, the Chiefs suffered on offense leaving them scoreless at the end of the third.

Pridgeon, who had rolled his ankle in the first quarter, took a few snaps, but didn’t fully return until late in the third quarter. Despite an ankle injury, Pridgeon had the desire to come back to play on Senior Night for his last home game.

Getting their starting quarterback on the field opened opportunities for the Chiefs, allowing them to come back from a 7-0 deficit ending in a final score of 21-7.

“It was great, you know? I couldn’t have really asked for anything else, beating the Rams the way we did, in the fashion we did,” Pridgeon said. “It was right on point with this team and the things we went through this season.”

Wallace said his team “had guts” and the necessary preparation and conditioning to get them to the next level of play. Once the clock hit zero, Okemos players and coaches ran onto the field and celebrated a must win game on their road to the state playoffs.

“I’m just so proud of our kids,” Wallace said. “What they’ve gone through these past three weeks, to lose on the last play of the game last week and then going down 7-0 here you know?”