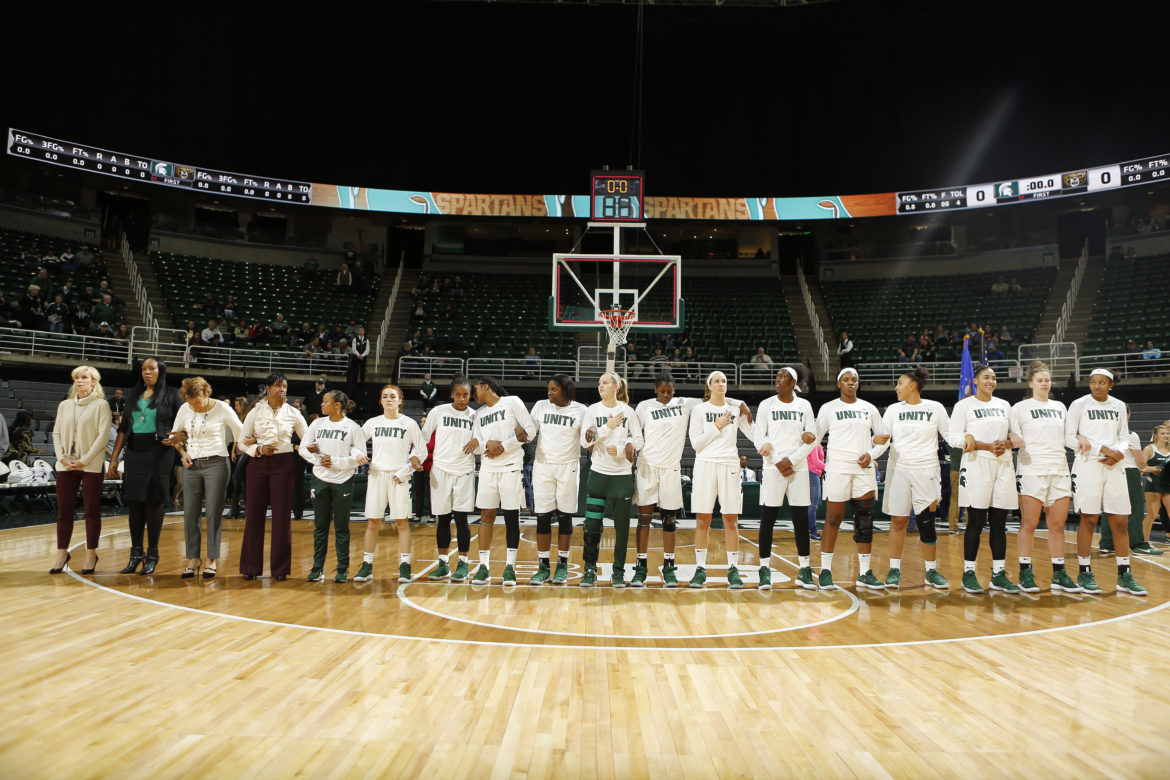 As an athlete we have the power to bring light to difficult situations or controversies that we face as a nation.

Colin Kaepernick took a knee during the national anthem and took a stand for injustices that African Americans have faced by police officers throughout their lives. Taking a knee created chaos to the world of sports and beyond.

He started a chain reaction of African American football players taking a knee, but also spurred an important conversation. Athletes, regardless of race, gender or sport, are now talking about social injustice and taking action to stop it.

In the WNBA finals this past year, the Los Angeles Sparks stayed inside the locker room instead of standing on the court during game 2 for the national anthem.

All across football, players including Michael Bennett, Marshawn Lynch, Kenny Stills, Marcus Peters, Sheldon Richardson, Malcolm Jenkins and majority of the Texans team have followed Kaepernick’s footsteps and knelt or locked arms during the anthem.

I and other players on the MSU women’s basketball team wanted to be a part of this movement, too. The week before our first game, head coach Suzy Merchant asked us if we wanted to do something as a team to recognize the issues and injustices that have been going on throughout the nation within this past  year.

Coach wanted our team to talk about these issues and how they affected each of us. She wanted us to speak freely and to show our solidarity with one another.

After everyone on our team spoke and shared our opinions, we decided that we did want to speak up and show support for each other. We have felt like we had a huge opportunity to bring light to an issue that affects our country and our local community.

As a team we decided to wear shirts that say “UNITY” on the front and “FAMILY” on the back. UNITY represents us as one; even though everyone comes from different places and backgrounds, basketball gives us a chance to work together. FAMILY represents us as one, a unit whose members may fight, argue and not see eye to eye all the time, but still love each another no matter what.

We also decided to lock arms during the national anthem.

For me, the decision was simple. As a young African American women, I have seen and experienced my own injustices. Things haven’t gone my way at times because of the color of my skin and my gender.

Having a brother, it’s even a bigger deal for me. Throughout our history, African American men have been attacked most by our society. They have been jailed and killed.

Basketball has given me that platform to speak, and I had to use it. If I didn’t speak, I wasn’t any better than the people acting against my people.

My teammate, Nia Hollie, had her own views on what it meant to stand up and bring more light to these issues:

“I think it was important because of who I am and what my race is or even how we are treated today. Before I was never really into politics and the Black Lives Matter movement, but honestly after President Trump was elected and the racism rose. This was my first time seeing firsthand what my ancestors lived their entire lives through. The shirt brings meaning to the diversity in our team. It shows unity through it all that despite what’s going on in the world and the separation between black, white or whatever race, we are all still together.”

Assistant coach Maria Fantanarosa had her own views on what it meant for us to bring light to this issue:

“I think that because we do have a stage and we didn’t do anything it would be disrespectful. The way we approached it was great, the way we came about it and put unity on a shirt showed that we were together in our response of it and that we wanted people to ask us questions of what it means. The shirt has brought people to ask me about the shirts, but it gives me an opportunity to address my strong feelings that there needs to be change.”

When you step out of your comfort zone and use your platform to bring light to an issue that affects all people, you are ready for change. As a team we all stepped out of our comfort zone in some way to shed light on an issue that affects us all as people and a family. For me wearing this shirt it was bigger than just me, it stood for my friends, family and all the other African Americans around the United States.

Kiara Carter is a journalism senior and guard on the Michigan State University women’s basketball team.